A tiny dream becomes a reality

Not many people can say they have physically built their own home, and you certainly wouldn’t expect a young wahine with no building qualifications to be one to say they have, but Georgia-Rae Flack (Kāi Tahu, Kāti Māmoe, Waitaha, Rapuwai, Hawea) of Karitāne can say exactly that.
Kaituhi Hannah Kerr reports. 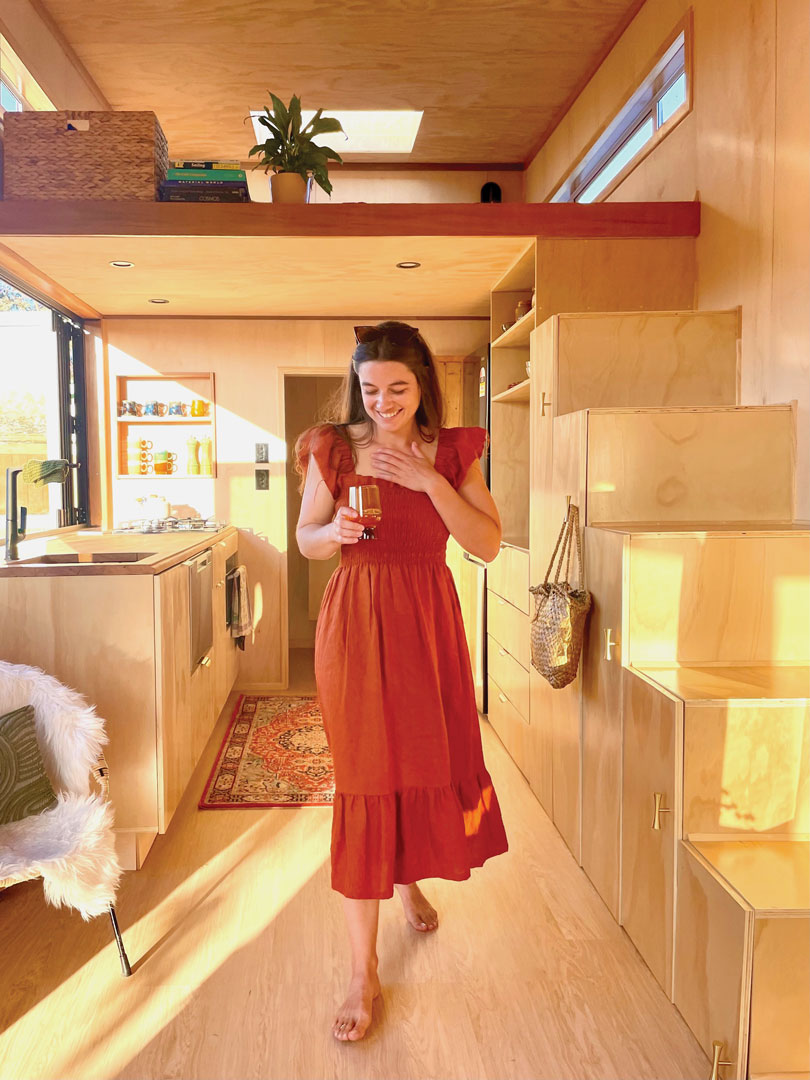 Above: Proud home builder and owner Georgia-Rae relaxing in her beautiful whare.

“I wanted to build a tiny house, probably five years before I actually started,” she says as we sit in the Karitāne sun admiring her craftsmanship.

While it is definitely a tiny house, the build feels spacious and open. Sitting on its trailer it’s 4.25m high, which is as tall as you can legally go on the road; 8.1m long and 2.9m wide. It’s nothing less than impressive, especially when you consider that Georgia-Rae is not a builder, carpenter or tradesperson of any kind but works as a Registered Nurse in the Neonatal Intensive Care Unit (NICU) at Dunedin Public Hospital. There have been smaller, previous builds though; a skateboard, a couch, and then helping to build the waka Hiwa-i-te-rangi, where she says she picked up a few skills. “I knew I wanted to build myself a home as a challenge … and as something to do.”

The passion driving Georgia-Rae was the desire to own her own home without having to work fulltime forever to pay off a mortgage, a situation many rangatahi are increasingly finding themselves in. All up it cost $50,000, less than most house deposits. Paying for it as she went since December 2019, Georgia-Rae credits her job for giving her the flexibility to be able to create her tiny home.

She works three 12-hour shifts a week. “My job is a great place to be, with a great team doing meaningful work. It’s a nice lifestyle and works for me as it helped me to build my home. I love my job and never had to worry about losing it in the pandemic because they always need nurses!”

The tiny house was built next door to her parents’ whare. “I was very lucky having the neighbours let me build on their land, and it’s been good to have Dad around because you can’t do everything yourself.”

Apart from the electrical wiring and plumbing, everything was done by Georgia-Rae, with help from YouTube, Google and whānau. Surprisingly, “nothing was particularly difficult” she says when asked about the challenges she faced. “There were definitely tedious tasks like scrubbing and painting the Zincalume cladding which had been under Mum and Dad’s hedge for a while,” she laughs. 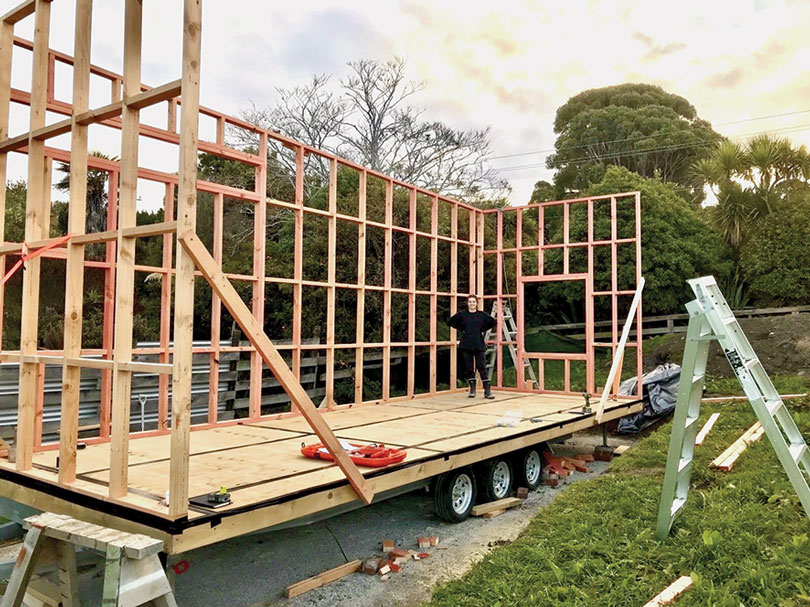 Above: Georgia-Rae and her tiny home in the early stages of construction.

Most of the exterior is recycled, including all windows, and the furniture is also second-hand. She has a tank and filtration system to collect her own rainwater, is planning to install a fire for winter, and has the house wired so solar power is possible in the future, meaning one day her goal of being entirely off-grid will become a reality.

Georgia-Rae’s values are centred around having minimal impact and trying to build a life that has a light footprint. “I feel more connected to Papatūānuku. Living in a tiny house you’re outside a lot, as well as being able to grow my own food and collect rainwater, it’s part of leaving as little mark on the earth as possible.”

There’s no denying her connection to Karitāne is one of the most important things in Georgia-Rae’s life. “I love it here; it’s always going to be home. This morning I was sitting on my roof in the sun having my coffee and Dad pulled in over the road to his work. Whānau are close and the community here is great.” 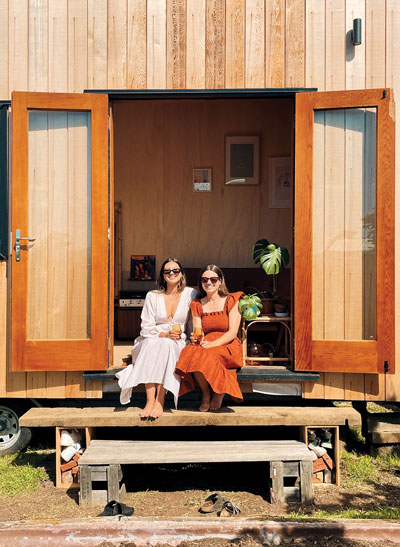 Her passion for the environment has seen Georgia-Rae make time to get involved with helping to protect and revitalise the local environment. She is the youngest member of the East Otago Taiāpure Committee (EOTC) whose vision is a sustainable, healthy, abundant and accessible fishery inside the East Otago Taiāpure that provides for the community’s customary, recreational and commercial needs.
“It helps that the meetings are held over the road too,” she says.

When asked why she chose to keep the house in Karitāne, she tells me to stand up on the bench seat we are sitting on. “I can see my whole pepeha from bed. I can see Araiteuru the ocean, Waikouaiti the awa, Hikaroroa and all my other mauka, and I can pretty much see the marae.” We crane our necks towards Puketeraki Marae which is hidden in the trees, “I think I can see the roof, but I know it’s there,” she laughs.

There’s no denying her connection to Karitāne is one of the most important things in Georgia-Rae’s life.
“I love it here; it’s always going to be home. This morning I was sitting on my roof in the sun having my coffee and Dad pulled in over the road to his work. Whānau are close and the community here is great.”

Georgia-Rae was born and bred in Karitāne, growing up on Coast Road with parents Brendan and Suzi and sister, Savannah. The Flacks are well-known and loved in the village, and give a lot of their time to environmental, community and whānau-based projects. Georgia-Rae says she wouldn’t have been able to build her home without them.

I reference her YouTube video where she gets her hand stuck while installing the extractor fan and Brendan had to save her. She laughs: “I wouldn’t be here without them, and neither would the tiny house! Bailey, Sav’s partner, towed it down here and everyone helped move it into place otherwise it would still be in that paddock!” 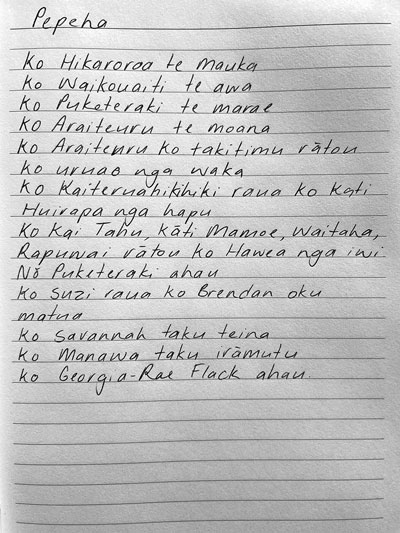 Halfway through the build she decided to start filming and posting on YouTube. “I have been watching tiny house builds for years and I thought I’m sure there’s people out there who would like to watch this. Plus, people are always asking how it’s going, now I can direct them to my videos.”

Georgia-Rae plans to continue creating content for her YouTube channel, including building a deck and converting a van. She also plans to share recipes she has created and her day-to-day vegan lifestyle.

“Having a tiny home has given me so much freedom,” she says.

She recommends that anyone who wants to build should go ahead and do it. “It’s learning one thing at a time and then just building on that knowledge. Five years ago, I never thought I would have done it.”

If you do decide to undertake the journey of building your own tiny home, Georgia-Rae has one piece of advice: “Any time I got overwhelmed by how much I still had to do, I’d just take a step back and look at what I had actually accomplished so far.”