Peter Ramsden (Rangitāne, Ngāi Tahu – Koukourarata) is a man well known for his boundless passion – for his people, the environment and for the regeneration of the place he calls home – Koukourarata.
In the recent Queen’s Birthday honours, Peter was made a Member of the New Zealand Order of Merit (MNZM) for his considerable contribution to the environment over the past decades. Recently he shared his rich and colourful life journey with his niece Pirimia Burger. 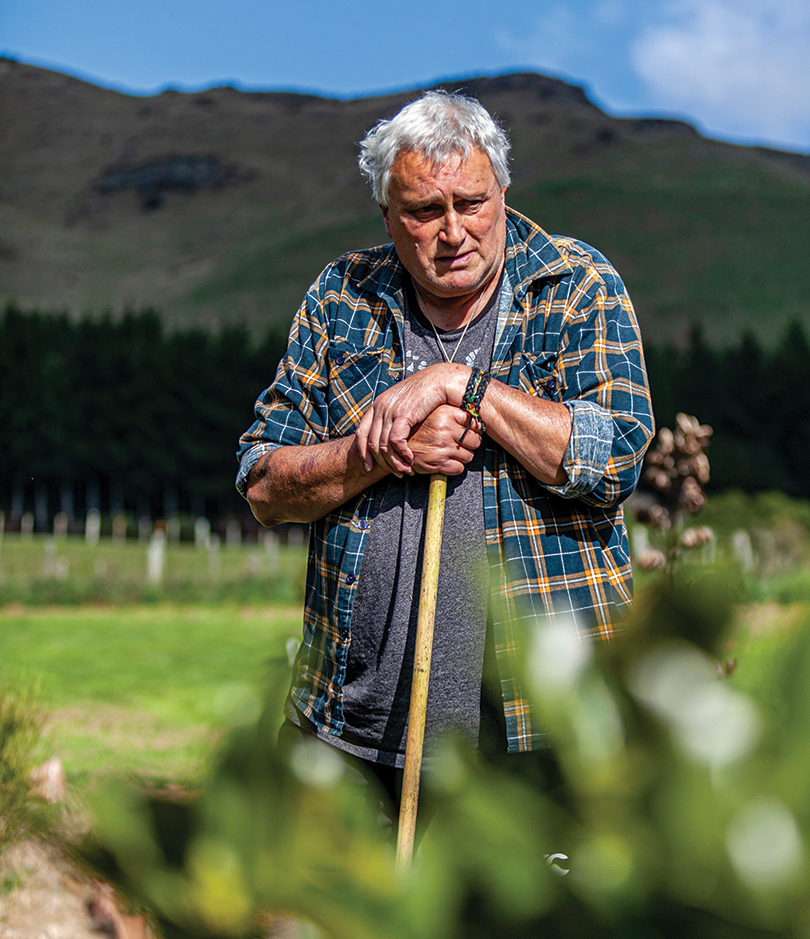 A skinny-legged boy looked up at his father with big brown eyes, seeking reassurance, as a kuia clasped his face. Hūpē and tears streamed as she sobbed and called to the dead.

“I remember it vividly. As soon as she knew my name, away she went, it was incredible. Dad explained it afterwards, ‘She was greeting the man whose name you have the privilege of bearing, Te Rangi Hīroa.’

“I’m still very aware of the responsibility that comes with having a name like that. I’ve never forgotten it”.

Like his namesake, Peter Ramsden is diplomatic, driven and a tireless champion for his people. Statuesque and devilishly handsome, he combines cheek ‘n charm with straight talk and action. It is a blend that has built trust with communities across Canterbury and spurred environmental, economic and cultural regeneration at his home in Koukourarata, Banks Peninsula.

Peter has lived a life of legendary adventure. Early years took him to misty mountains and remote islands, mining for gold, blasting rock, leaping from helicopters and eventually returning home with his skills, family and vision. 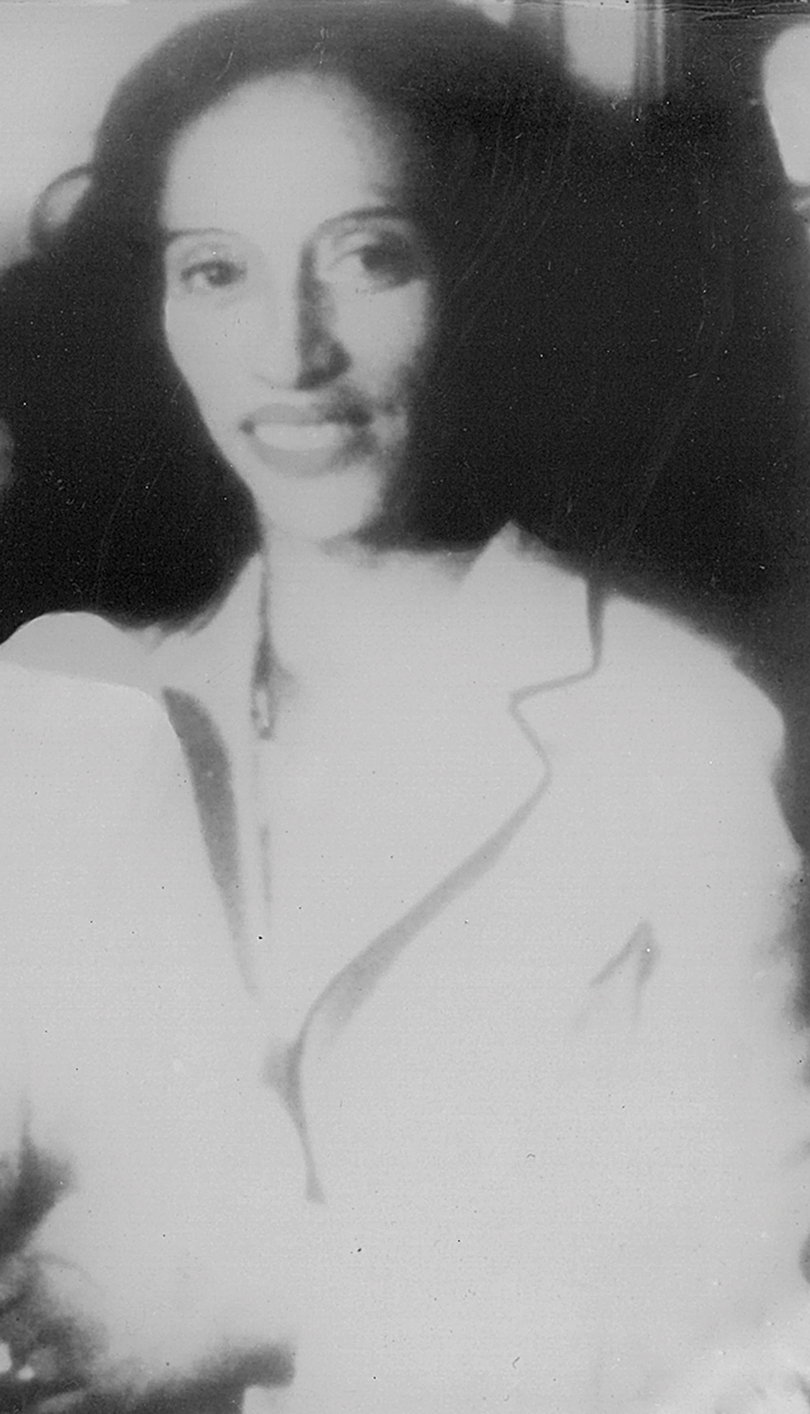 Through the Manawatū Te Rā and Te Aweawe families of Rangitāne, and the Soloman and Tikao families of Ngāi Tahu, Peter was born into whakapapa leading back to Takitimu and Kurahaupō waka, affording him what he calls, ”some extraordinary lines”.

His mother, Henrietta Merenia Manawatū Te Rā, known as Billie, was born in Koukourarata. Tiny in stature but huge in personality, her vivacity could not beat the menace of tuberculosis. She died in 1953 when Peter was just five years old.

Peter was raised by Eric, with his sister Irihapeti, in Wellington. Their older sister, Tiahuia, was a whāngai in Waikato-Tainui and joined them later. (Billie’s child from a previous marriage, Rangiruea, was also in Waikato and stayed there into adolescence).

“Here was this Pākehā man in the 1940s bringing up three Māori kids alone. I don’t think he was particularly successful at it but he was honest, staunch and true to us.”

“All the 28th men; Rangi Logan, Rangi Royal, Charlie Bennet, Awatere, they were all our uncles. They’d be round, a couple of bottles of scotch in … I’d take my blanket and pillow and fall asleep on the floor outside the door listening to them kōrero into the night.” 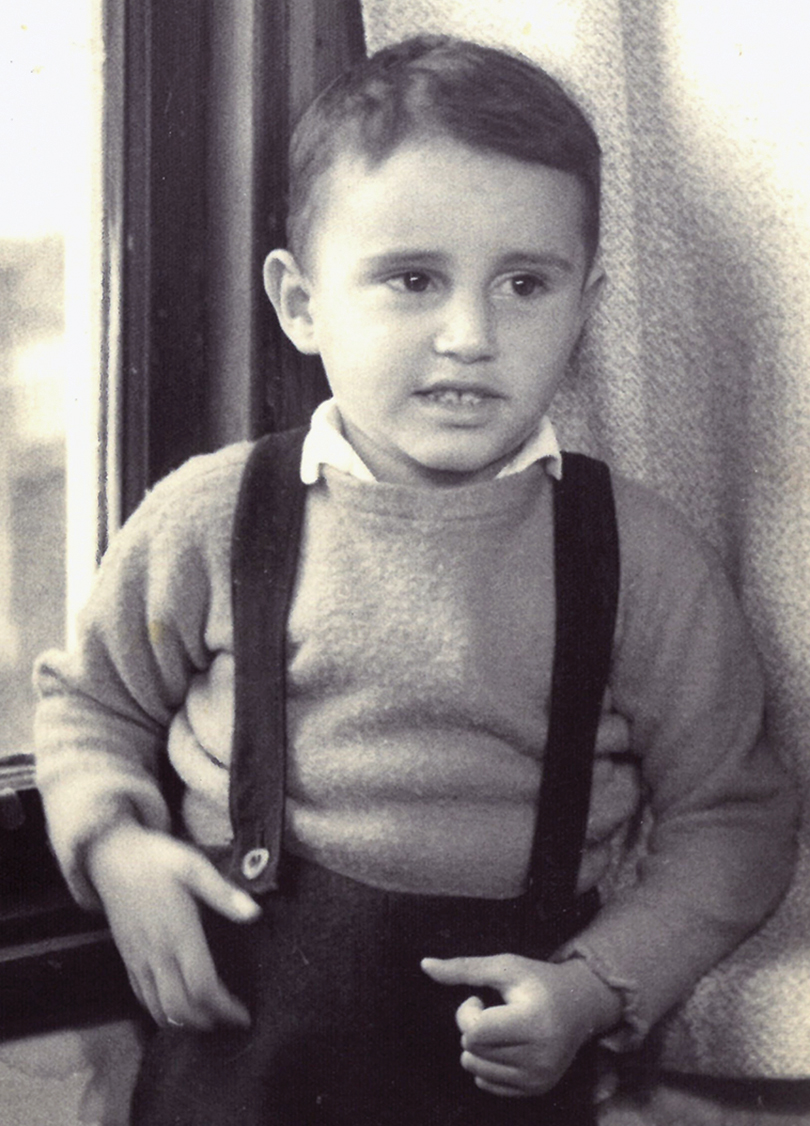 As a baby, Peter was given to the people of Te Rangihīroa in Tongapōrutu, Taranaki to whāngai but the arrangement lasted less than 12 months as Eric ached for his son and returned to Taranaki to collect him. Eric kept him close from then on.

“I was his offsider. Dad’s bag man, I carried round an old plaited basket for him. We’d go to tangi and hui up and down the country. I remained deeply involved in te ao Māori that way.” 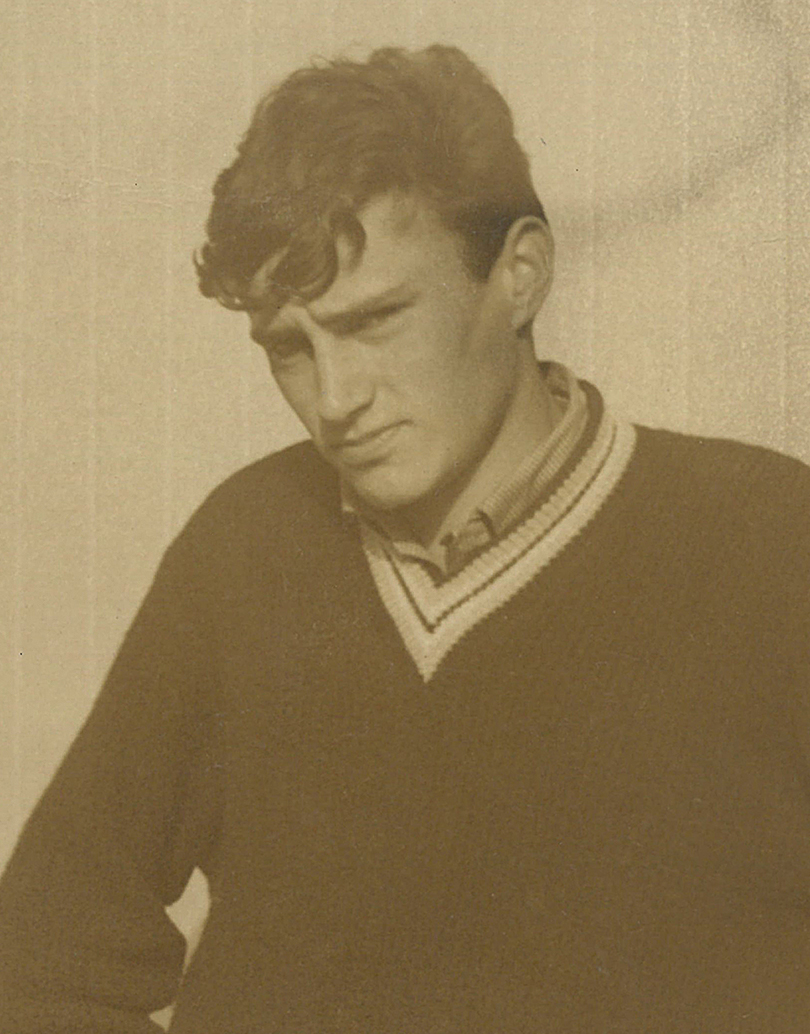 Above: Boarding school days in Wellington.

At age 12 his father died, and Peter began “probably the most miserable period of my life.”

He was sent to boarding school, a place that typified the racist attitudes of 1960s New Zealand, he says.

“I remember that period with absolute dread. This lonely, skinny little brown face in a sea of prejudice and racism. I was a target.”

He was victimised and regularly beaten and that whole experience has cemented a deep-seated anger in Peter and intolerance for bullying.

“It was all young guys competing against each other with chainsaws kind of thing. I came out a confident, fit, young guy. I adored the challenges of those mountains.”

As an Environmental Forestry Ranger, Peter’s summers were spent culling deer, chamois and tahr, and his winters cutting tracks and building walkway bridges and huts. It was hard, physical labour and he thrived. But he had itchy feet.

“I started off with menial jobs but it didn’t take long to find out that I was pretty bloody good at this.”

Peter was soon managing projects to set up quarries and co-ordinate drilling and blasting.

“I’d have a ‘swampy’ [a D4 Caterpillar], a small digger, a compressor and a big drilling rig. We’d go about seven kilometres between each and I ran all 16 of them. When the other team broke through there’d be hundreds of thousands of tonnes of rock blasted. An absolute buzz!” 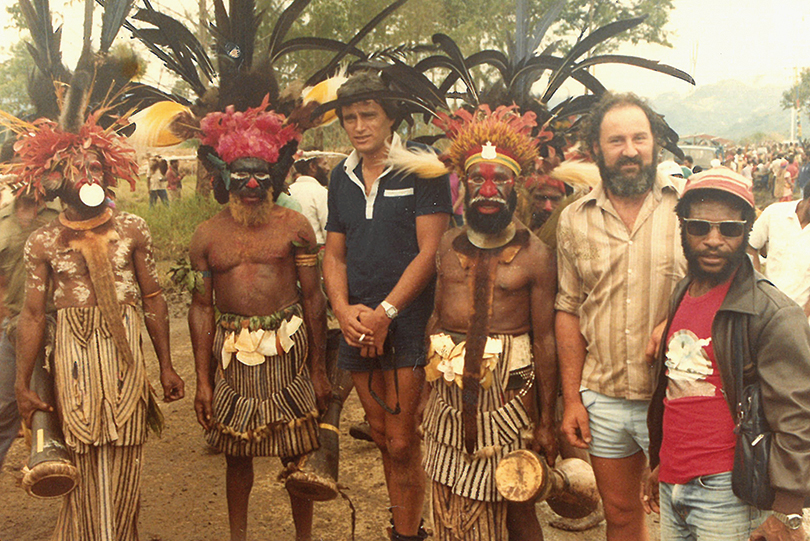 Above: Many of Peter’s early mining years were spent in Western Highlands Province, Papua New Guinea.

In the 1980s, Peter was in Western Papua New Guinea as part of an exploration drilling team. He was flown in to set up a gold-mining structure.

“We were 600 kilometres up the Fly River with these fleets of barges – 20 bulldozers, 14 diggers – big bastards – and trucks going up to the mine sites. It was that stuff that gave me such a thrill.”

On another flight above the dense highland forests, Peter jumped out of helicopter mid-air before it crashed into a mountain. On the forest floor he sat and waited for rescue beside his two dead colleagues.

For 10 years he excavated and tunnelled for dams and hydro schemes in Malaysia, Thailand, Indonesia, the Philippines and China. He managed massive projects and was responsible for the lives of his crews. 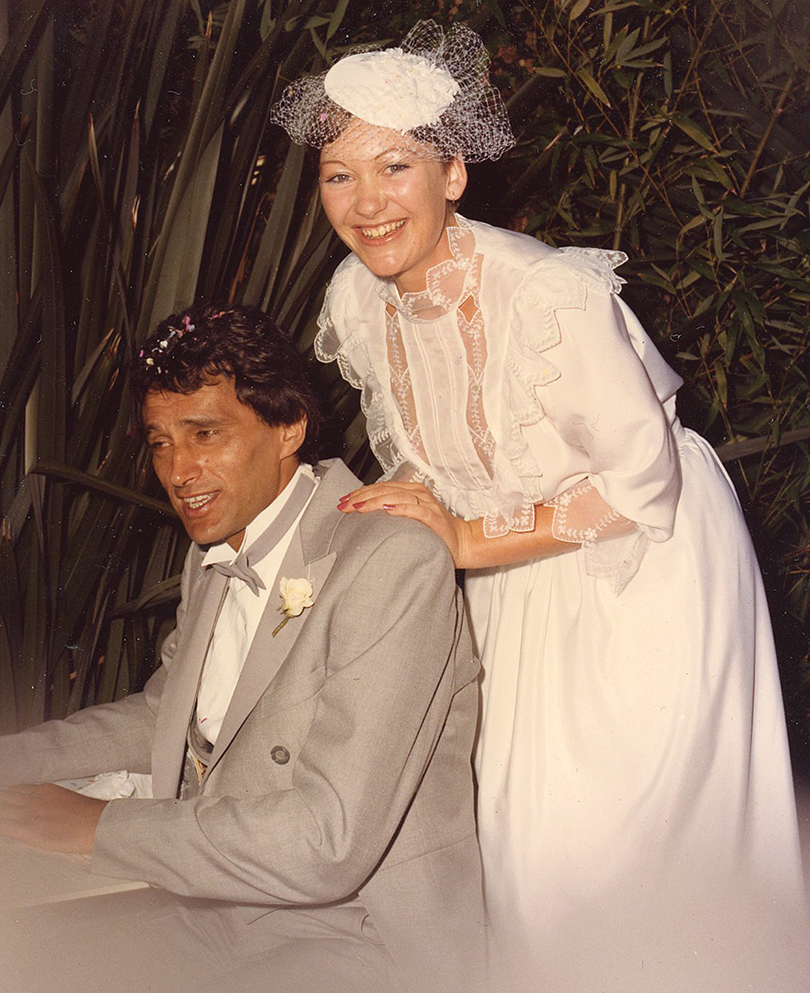 Above: Peter and Annie Ramsden (née Charlton) married in Sydney, 1982.

Amidst the blasting, there was room for love. In the early 80s at a friend’s wedding in Sydney, a beautiful young Australian called Annie Charlton sat on Peter’s knee during the speeches. The rest, as they say, is history.

The two were married in 1982 and returned to Papua New Guinea – straight into the diversion tunnel for Peter and straight into culture shock for Annie. Peter looks back on his new bride’s courage with admiration.

“My crew got dressed up in their traditional dress as a sign of respect to welcome her, but she had no idea they were my mates. It was all ‘bones in the nose’ and bows and arrows sort of stuff. Poor Annie was in absolute shock.

“I can’t imagine any other person putting up with my lifestyle. She’s an extraordinary woman.”

Their first child, Mihiata, was born in 1985 in Australia, and son Mananui in 1988. Both were brought home and named by kaumātua, Erena Raukura Gillies (Taua Fan) and Te Uri o Pani Manawatū (Pōua Barney). 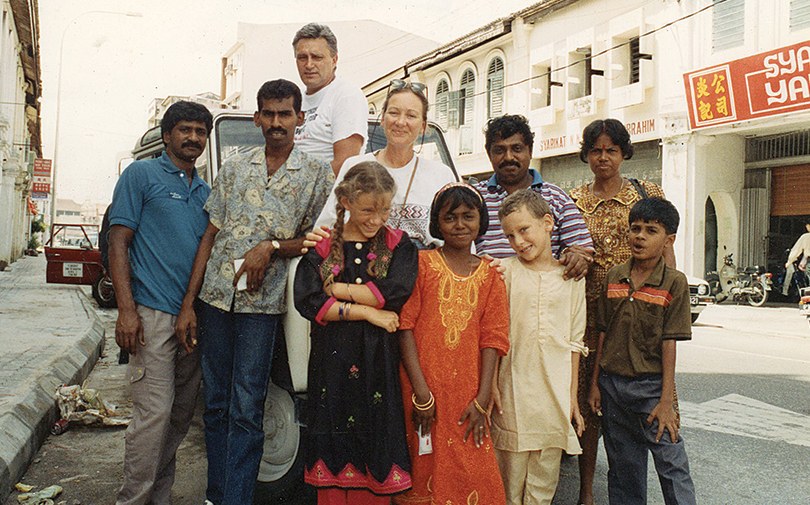 During quiet times on night shift in the mines, Peter’s thoughts started to turn to home.

“I’d see that view coming over the hill, looking down at Koukourarata. It never leaves you. Doesn’t matter where in the world you are. When you keep seeing it, you know it’s time to come home.

“My kids spoke better German, Bahasa and Mandarin than their own language. It was time for them to learn who they were.” 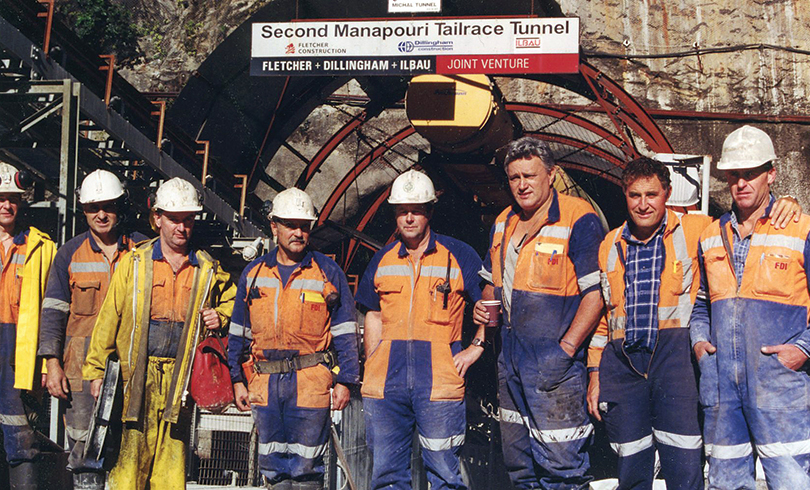 Above: Peter describes working on the Tailrace tunnel at Manapouri as a pinnacle of his career and the start of his journey to come home.

In 1998 construction of the second Tailrace Tunnel at the Lake Manapōuri hydro station began and the internationally experienced Peter was appointed superintendent.

But once that job finished, “internationally experienced” became “overqualified”. He had hit a glass ceiling in New Zealand. The family then moved to Christchurch and the best way for Peter to start putting down roots was to head into the kitchen and get a feel for the place and the people, while everyone adjusted.

“Sister [Irihapeti] had protected the land for us, I knew I wasn’t going anywhere. So I went to the rūnanga and got the mandate to undertake some projects.” 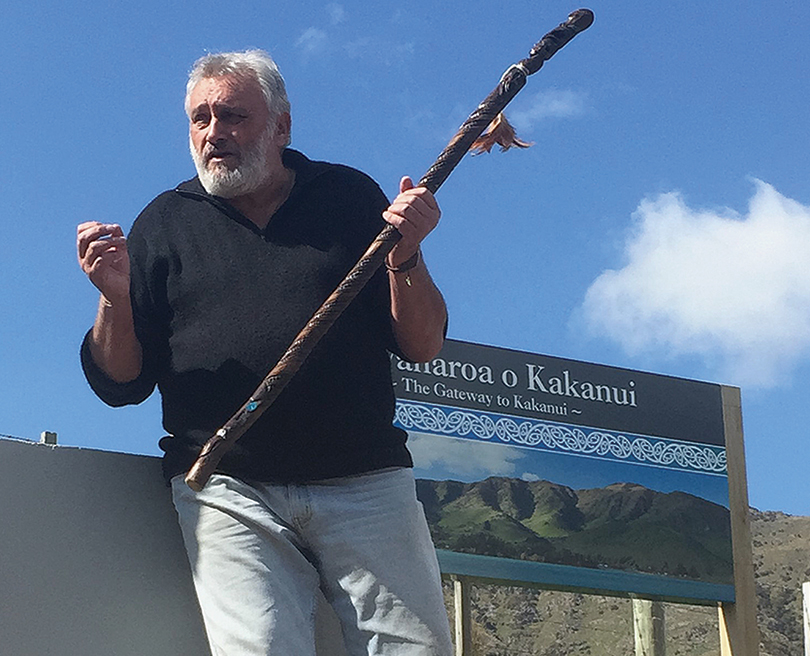 Above: At the entrance to Kākānui Reserve, Koukourarata, which Peter played an instrumental role in establishing.

First Peter surveyed and fenced off the two urupā at Koukourarata. He arranged for Canterbury University to bring in ground penetrating radar technology to identify the location and number of graves.

“Cattle were wandering all over our tīpuna. I had to pay my respects and dues, the place to start was with the tīpuna. So that’s what I did. Fencing them off.”

Next was surveying Māori land reserves, a task not visited since November 1870.

“We got the surveys done so the hapū could actually see where our lands were to do their planning.”

These two projects happened first because they represented the foundations – tīpuna and whenua – the source of identity. Peter was also propelled by the future. To this day he prioritises speaking with rangatahi about belonging to their tūrangawaewae.

In 2015, work began on a whare wānanga on the marae. For Peter this was a way to show taiohi, “you belong, this is yours, take control”.

“The building is equipped with the digital technology that reflects the future of rangatahi because they’re the future of the hapū. I’ve been on many marae where it’s all based around certain individuals and it’s wrong. If you turn kids away, you may as well shut the doors.”

Above: Peter sits on the seat created by his pōua Jack Solomon at Kaikōura. The reflective spot inspired his idea for the three tūpuna pou now standing at Koukourarata.

“My first funding was $900 from DOC. That was like winning the ultimate. I turned that into planting and fencing and built up from there.”

Over the next 20 years Peter got results. From restoring waterways by fencing and planting over 70,000 native seedlings, to protecting an 87-hectare block of native bush across the steep volcanic hills around Koukourarata. With others he set up an aquaculture business and mussel farms for local employment, facilitated scientific trials on īnanga with ecologists and returned kūmara, taewa and organic farming to the whenua.

Peter’s leadership saw the creation of three pou at Kākānui Reserve, the Le Bons Bay Environment and Cultural Centre and the voicing of hapū interests on committees, trusts and boards – not to mention the 20-plus years of laying the hāngī at Okains Bay on Waitangi Day.

Working together
“I acknowledge the people I’ve worked with. It’s about the sharing of our values. The values are ours but they are to be shared on this journey we take together.”

To those who will continue his work, Peter only asks they take time to be kind to each other.

“Just acknowledge one another’s part in the bigger picture.”

The child who felt such a mantle of responsibility for his name now has a legacy of his own. He is the kaumātua who educates others about the responsibility they have to the future.