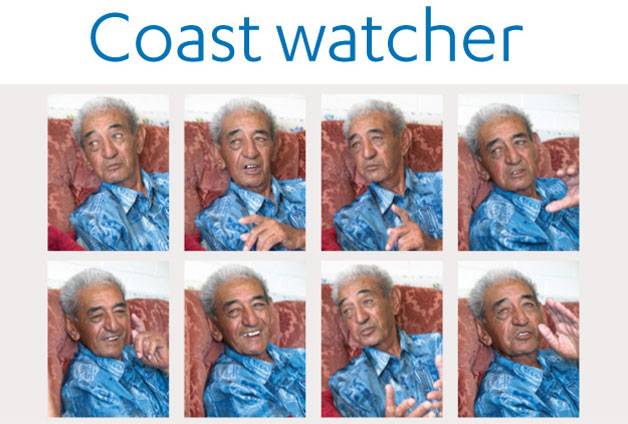 Uncle Hori Briggs has been policing the Canterbury coastline in an honorary capacity for the past 14 years. Kaituhituhi Mark Revington reports.

Uncle Hori Briggs opens the door of his Rāpaki kaumātua flat on a hot summer afternoon. Come in, he says with a big smile. Once he had an imposing figure to go with that smile. Now he’s a slim wee thing. Throat cancer, he says, without a trace of regret. He turns 80 in September this year and hopes he will beat his dad, Frederick George Briggs, a former mayor of Lyttleton who passed away at the age of 81.

It’s hard to imagine him facing down seafood poachers but as an honorary fishery officer, that is what Uncle Hori has been doing for the past 14 years or so. It can be a rough role. Plenty of officers have had knives pulled on them, he says. He’s got a bullet proof, stab proof vest, and he wears it on the job. But the role isn’t about confrontation, says Uncle Hori. It is about promoting sustainability and he prefers to rely on reasoned discussion, as much as the circumstances will permit.

“I’ve never been threatened, well not much, but I’ve had some pretty strong arguments.

“In the early days it was really heavy. People just took seafood because it was there. People would get knocked out. Our own people were the worst. They would always come up with an argument about it being their right.

“I had one guy – I don’t know whether he had whakapapa connections to the North Island or the South Island – but he and a mate had a hundred pāua and 99 of them were undersize. Jeez did he throw a wobbly when I stopped them. He said he had just come out of prison and he wasn’t going back.

“I backed up to the car and said, ‘let’s talk reasonably. You said you have a permit but you don’t have it on you. The rules say you have to carry a permit. Who signed it?’ He said Rik Tau and Jimmy Brennan signed his permit. I said, ‘did you know they’re my first cousins and furthermore I’m a kaumātua of Rāpaki?’ He quietened down real good. He had his car confiscated and got a large fine.”

You hear all the reasons and excuses as an honorary fishery officer, he says. Sum up, suss out is his philosophy. “You just let them rave on. You can’t be dogmatic. You learn to stay quiet and let people have their say. I never want to do it the hard way, just do it as easily as I can. I just say to them, ‘let’s talk sensibly’.”

Brian Giles describes Uncle Hori as one of life’s wonderful gentlemen. Giles trained Uncle Hori as an honorary fishery officer and was his co-ordinator for 13 years.

“Hori came to me through the marae at Rāpaki to get trained as an honorary fishery officer. He was enthusiastic and loved what he did and he is one of those people who you always feel comfortable talking to even though he might be explaining the rules to you. He was always polite and I never saw him get in a situation that got out of control.”

Uncle Hori has patrolled the coastline from Kaikōura to Timaru, with a vehicle and an inflatable boat, checking catch sizes. It’s all about sustainability, he says. Is that enough to be out there in the weekends, sometimes confronting angry people? It seems so. He’s definitely not in it for the money. Uncle Hori pulls down $1000 a year as an honorary fishery officer and drove the school bus from Rāpaki to Christchurch during the week.

He loves the water, and the coastline, and he believes in providing for future generations.

“I remember when I was a kid, there were mussels and pāua everywhere. That’s all changed.”

But he reckons people’s attitudes are changing, and fewer people try to rort the system these days. It is partly a result of education, he says. There are still poachers who rile him, especially those who try to hide excess catch. There’s enough to go round for everyone if people are sensible, Uncle Hori says.

If people are genuinely unaware they have taken too much of something or taken undersize shellfish, he will let them off with a warning.

It takes eight pages of paperwork to back up a fine so he’s not going to hand them out willy nilly.

Hori Maureamai Briggs (Ngāi Tahu – Ngāi Tūāhuriri), known as Uncle Hori, was born in Lyttleton in September 1933. A life at sea seemed almost inevitable after he ran away to sea when he was 15. It was 1948 and he joined a ship which took him first to Dunedin, then up to Auckland and through the Pacific to Vancouver. He spent the next three decades on or around the sea.

During that time he married Mekura Tuatine at Taumutu and they had one daughter, Pani. Mekura passed away four years ago and is buried at Taumutu, Uncle Hori married Areta Paea in 1970. They have three children – two girls who have come from Australia, he says, and a son who lives in Townsville and has an Australian partner.

Uncle Hori spent the first decades of his life on ships operating through the Pacific Ocean and carrying timber to San Francisco and Vancouver. When he was 35, he bumped into a mate from Tauranga who offered him a job stevedoring or loading and unloading on the Auckland wharves.

“The wife had been nagging me to come ashore,” he says. So he did and they spent the next decade in Auckland. He left the wharves to become caretaker at Tāmaki College in Glen Innes. But Hori, it seemed, just couldn’t keep still. The family’s next move was to Australia, to the Gold Coast where he worked for a while operating road machinery, skippered cruise boats and spent a couple of years managing a houseboat company.

It was his love of rugby that brought him back. That and a tangi. He’s always played rugby – on the wing in Lyttleton, then for the Hokianga Rugby Club, which was a social team in Auckland “I came home for a golden oldie rugby tournament in 1995 and stayed with my daughter in Lyttleton. The next thing I got a call that my oldest sister had passed away so I flew home for that and stayed.”

He’s had plenty of reminders that life is temporary, he says. “Jeez, I’ve been to plenty of tangi, left, right and centre. But I’ve got this far. I’ve got a year to go to beat my dad who died when he was 81.”

Just before Christmas Uncle Hori was chuffed to be honoured with a silver award for his service as an honorary fishery officer. “I’ve been doing it for 14 years,” he says. “I loved it.”

Fishery officers make sure that all fishers understand and stick to the New Zealand fishing rules. They monitor commercial, customary, and recreational fishing and investigate illegal activities, such as people taking more fish than they’re allowed.

Honorary fishery officers act in a similar capacity but are volunteers.

The roles of a fishery officer:
They patrol the coast, checking what fishers have caught.
They investigate suspicious behaviour, gathering evidence for court cases against people who have broken the rules.
They look at how well people are sticking to the rules and if a rule needs to be changed.
They work with tangata whenua to develop plans around managing fishing in the local fisheries.
They educate people on the rules for fishing in New Zealand.