E tū and be counted 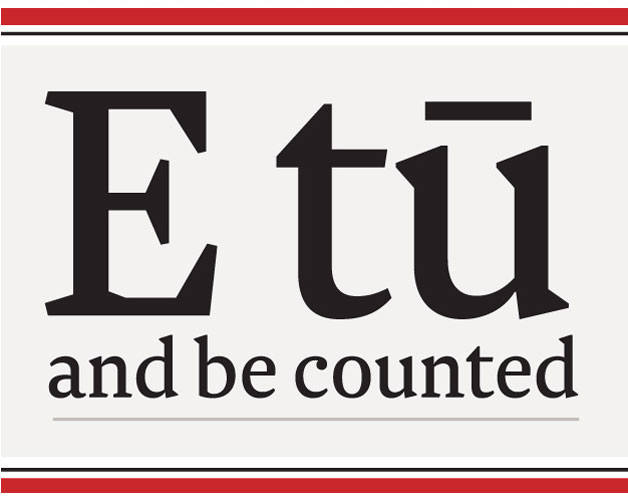 Māori Roll or General Roll? Underway from March to July this year, the Māori Electoral Option is being offered to Māori voters. It’s a vital part of New Zealand’s democratic process. The number of registered Māori voters currently sits at around 426,000. These people will receive a pack courtesy of the Electoral Commission and can check which roll they’re currently registered to vote on – Māori or General. If they choose, they can change from one roll to the other. Nā Steven Shaw.

It’s the first time the Māori Electoral Option has been offered since 2006. It traditionally follows the New Zealand Census, but the Census planned for 2011 was not held due to the 22 February Christchurch earthquake. This year the Census was on 5 March, and the Option runs from 25 March until 24 July.

An awareness campaign kicked off in February, with local outreach teams working across the country to get the word to the people.

One of the outreach teams is headed by Tracey Wright-Tawha (Kāi Tahu, Kāti Māmoe, Te Āti Awa), CEO at Ngā Kete Mātauranga Pounamu Charitable Trust in Invercargill. With six field workers and a goal of reaching a minimum of 2,500 Māori, her team is working from the south right up into the Whakatipu area.

“It’s a a process of face-to-face engagement,” she says. “We can raise awareness on the Options, give out information or profile what the Māori Electoral Option is by putting up displays, giving presentations and being in environments where our whānau comfortably engage so questions can flow freely. We work collaboratively with the Electoral Registrars.

“We’re tagging along on key events that are happening; whether they’re shearing competitions, waka ama on the Ōreti River for Waitangi Day, or tītī/muttonbirding permit days. We were up in Queenstown in the gardens where they held the big Waitangi Day celebration, just to put a friendly face to it and raise awareness.”

Enrolment Services national manager Murray Wick says the disciplines and preparation for the Māori Electoral Option are no different than for a general election.

“What we want to achieve is a well-informed Māori population. We want them to know when it’s on, what it’s about, what their choice is, what’s the impact of that choice, and how to exercise that choice.

“Yes, it does help inform how many electorates there will be – both General and Māori – and where those electorates will be positioned. But the important thing is for each person to make the decision based on what is good for them and how they believe they should be represented. I believe the boundaries and things like that are a secondary outcome.”

Māori Party co-leader Tariana Turia says the number of Māori seats could rise or fall depending on the outcome, and sees the Option as a great opportunity. “Our people have to realise that these seats have been hard fought for,” she says. “The Māori seats guarantee representation.”

The notion of the seats being disestablished is never too far from memory. In 2008, John Key stated that once all historic Waitangi Tribunal claims were settled – at that stage he was aiming for 2014 – the seats would go.

However, the Māori Party moved fast to put that fire out, negotiating successfully to retain them until such time as Māori believe they’re no longer valid in terms of representation.

“The electorates are even more significant these days,” says Turia. “Since the Electoral Amendment Law changed in 1993, the number of Māori seats is actually now calculated in proportion to the Māori population.”

Four Māori seats were established in 1867 – three in the North Island and one in the South – in time for the first elections for Māori members in 1868. The seats were supposed to be on trial for five years, but in 1876 they were made permanent. It wasn’t until the MMP era arrived that the number increased, first to five in 1996, and up to seven in 2002.

The Māori Roll, however, wasn’t introduced until 1948–1949, and the Electoral Option was first introduced in 1975 by the Labour Government.

At the last general election, close to 10,000 new enrolments came through on the Māori Roll, 80 percent of all new Māori enrolments. “That did not result in a new seat, but we know that this time, it’s highly likely there will be a new seat,” says Turia. “We think it will be in the Auckland area, possibly in South Auckland. And we need to be well prepared for that.”

The Māori Party believes the most effective way for Māori to be represented in Parliament is for all young Māori to automatically go on the Māori Roll. “We could have between 13 and 15 seats in Parliament,” says Turia, “and that would mean for the first time ever in this country that the Treaty of Waitangi would be able to be given expression to. No-one would be able to govern without those Māori votes.”

But it’s not as simple as just enrolling to make a difference to representation in Parliament. Voters must still get out and vote on election day. In 2011, only 58.2 percentof Māori exercised their right to vote, down from 62.4 percent in 2008. It was also the lowest general voter turnout for 100 years, with only an estimated 73.83 percent of the voting population turning up, a decrease of more than five percent over 2008.

“It’s really tragic, less than 60 percent of our people getting out to vote,” says Turia. “In a way it does send really significant messages to the government of the day, that if Māori people don’t believe that their voices are being heard, they then think to themselves, ‘Well why would I bother?’”

Wright-Tawha says she has been encouranged by the discussion among whānau. “We can’t advise or tell people how to make their choices, but it’s been interesting when we’ve said talk it over with your whānau – watching young people saying, ‘Well, what do I do?’ Invariably the question comes up, ‘Who should I vote for?’ and it’s great hearing the whānau say, ‘Well, it’s got to be your choice,’ with all the debate that comes around that.”

Turia says there is widespread support, particularly from the young, for retaining the Māori seats. “Too frequently our voices are marginalised from the mainstream political debate,” she says, “And without special attention, the impact of kaupapa Māori, tikanga Māori, it’ll be reduced to a minor role in the state of our nation.

We need to urge all Māori of voting age to get your name on the Māori Roll ready for the 2014 elections, because our survival as a people depends on it.”

More information on the Māori Electoral Option is available online at www.elections.org.nz. Māori electors can check their enrolment, enrol, or update details through the website. Enrolment forms can also be requested by free texting 3676, including your request, your name, and your address in the body of the text. Alternatively, call 0800 367 656, or enquire about the Māori Electoral Option at a post shop.