For Jymal Morgan, the successful renaissance of the Māori language lies in its acceptance as “normal”. He talks to kaituhituhi Adrienne Rewi about integrating te reo Māori into everyday life.

Hearing his two young sons speaking te reo Māori is normal to Jymal Morgan, and that’s just the way he likes it. Kiniwai (3), and Pewhairangi (2), hear only te reo Māori from their parents, and like a growing number of Ngāi Tahu tamariki, they are growing up at ease with their ancestral language. At the same time, their exposure to English spoken outside the home means they are already bilingual, weaving their sentences with the threads of both languages.

“We don’t teach them either language,” says Jymal.

“They are picking up both of their own accord. Everyone takes a different path to bilingualism but for us, it is about normalising both English and te reo Māori.”

Jymal (Ngāi Tahu – Ngāti Irakehu/Ngāi Te Ruahikihiki, Ngāi Tāwera) and his wife, Kaycee Soutar (Ngāti Manawa, Ngāti Pikiao, Ngāti Pūkenga), wanted to give their children the best start in life and for them, that meant raising them to be bilingual. The fact that Kaycee did not speak te reo Māori before Kiniwai was born was no hindrance. 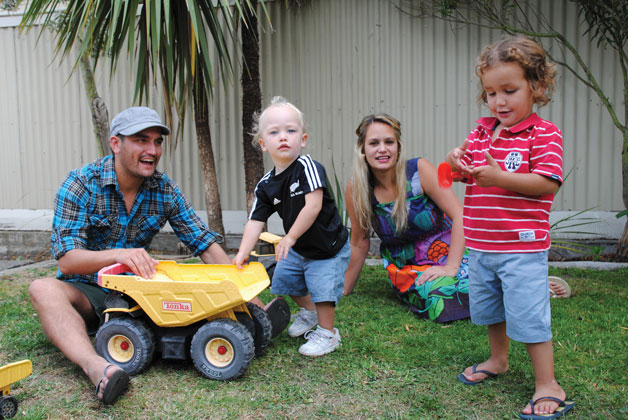 “We both agreed on the children being brought up in a Māori-speaking home and a month before baby was born, I just stopped speaking English to Kaycee. It was a quiet house for a while,” he says with a smile.

After the birth of their first child, Kaycee began studying te reo Māori at polytechnic.

“We always had a Ngāi Tahu culture at home, but the language was absent. My mother and wider family were very supportive of us learning te reo.”

The turning point for Jymal came when he was enrolled at a Māori boys’ secondary school – Hato Pāora College, near Feilding in Manawatu.

“That was pivotal for me. I had a teacher who was a passionate te reo advocate – Irene Pewhairangi. She drove home the importance of te reo Māori. The key thing I took away from those years (1999–2002) was the sense of responsibility my generation has in ensuring the language survives.”

From there, Jymal enrolled at The University of Waikato, where he gained a Masters in Māori and Pacific Development, and a Graduate Diploma in Strategic Management. After university, he went to Wellington, where he worked for publishing house Learning Media, specialising in Māori-medium resources. In 2010, he returned to Christchurch to work in the economic development team for Te Rūnanga o Ngāi Tahu.

While he agrees te reo Māori has come a long way in recent decades, Jymal believes there are still a number of challenges facing the language.

“Since the 1970s there has been a proliferation of multiple initiatives driving the language, but research coming out now suggests there has been little improvement in the number of speakers or proficiency as a result of those initiatives. The awareness and the status of the language in the wider New Zealand psyche has grown, but that is not translating into more proficent speakers,” he says.

“A Government review of the Māori language sector carried out in 2011 found that more than $500 million is being spent on the language, yet the language continues to struggle. I think there needs to be some critical research carried out to help us understand what helps people become active users of Māori language, and what ingredients are required to establish an ecosystem where language can thrive. We need to understand what programmes work and what don’t. We need to be more accountable to ourselves and ensure we support initiatives that work, rather than language programmes where the sole purpose is to attract funding.

“We also need to improve the overall standard of the language. I often hear the language being spoken badly – and I am a repeat offender, but it must be made clear that there is Māori slang and Māori colloquialism, and then there is incorrect use of te reo Māori. We need to encourage excellence in all areas.”

Jymal says his knowledge of te reo Māori has given him opportunities he wouldn’t otherwise have had. Through te reo, he has had the chance to meet amazing people who have helped him grow personally and professionally – and he is keen for his sons to have similar, if not better, opportunities in the future.

“We are keen for the boys to see te reo being spoken beyond the home and beyond the marae. Ultimately, the marae could be a small part of their lives, depending on the paths they choose for themselves. We would be naive to think that the marae will be the cultural epicentre for time immemorial, for it to be the storehouse of the language.

“We need te reo Māori to be normalised to the point where it is a fully integrated, fully living language. We can’t yet go to the supermarket, or the bank and speak te reo Māori – we’re not there yet.”

For te reo Māori to endure, Jymal believes it has to have everyday relevance beyond the home, beyond the classroom and beyond the marae.

“The Māori economy is now worth around $38 billion and growing at the rate of developing economies across the world. If that’s the case – if Māori are going to be movers and shakers in the economy – what part is te reo Māori going to play in that?

“When I go to China, I would see it appropriate to learn basic Mandarin, and to have an understanding of the culture. When people come to do business with Ngāi Tahu, or Tainui, or other iwi, do they do the same? I think it’s important that we make the language relevant across all settings and until we normalise it, we can’t expect others to.”

When the Ngāi Tahu Māori language strategy, Kotahi Mano Kāika, Kotahi Mano Wawata (1000 Homes, 1000 Dreams), was launched, there were perhaps five Ngāi Tahu families speaking te reo Māori in the home. Now there are between 20 and 30 and Jymal is confident those numbers will continue to grow.

“You can be sure there is a growing pool of highly proficient, culturally adept speakers within Ngāi Tahu. Many of those people are also highly educated experts in their chosen fields, and I think the challenge for the iwi in the future will be to harness and keep hold of those people.

“We can’t rest on our laurels and expect our people to stay just because they are of the iwi.”

He acknowledges that it takes time to build a pool of the best bilingual people but he sees a bright future ahead.

“We have to strive for normalcy. Te reo Māori is not a separate thing. It is an integral part of our culture. Therefore, it is important to remember that language doesn’t grow from policy; but good policy is a key support component and has its place. Te reo Māori rests with those who see through the revitalisation of our language, a brighter future for all New Zealanders.”