What constitutes a good day? 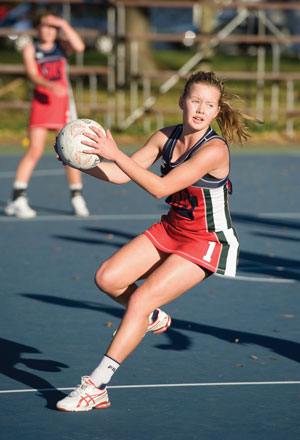 When I have no reason not to smile.

If you could live anywhere, where would it be?
Waikawa Bay. It will always be my home.

Who is the most important person in your life?
My sister Toya. We are best friends, we look out for each other and she gets me through everything. The thing I love about her is that she knows when I need a hug or someone to laugh at.

What is your favourite song?
At the moment Forever by Six60. Anything I can groove to.

On what occasion do you tell a lie?
When I have to explain why my homework isn’t finished

What constitutes a bad day?
When I don’t get a good sleep.

What is your greatest fear ?
Losing someone close to me, or getting a really bad injury.

What is your worst character flaw ?
Procrastination.

Which talent would you most like to have ?
I wish I could sing and play guitar.

What’s your favourite childhood memory ?
Christmas Day in Waikawa Bay with all my family and all the amazing food.

What country would you most like to visit ?
China. When I was little I promised my sister I’d walk along the Great Wall of China with her.

Do you buy Lotto?
I’m not old enough. I make mum buy me Scratchies though.

What would you do if you won Lotto ?
Go on a shopping spree! Travel the world and set up all my close friends and family.

Do you believe in reincarnation ?
Maybe.

Even if you don’t, what would you come back as if you could?
Something that could fly. Butterflies are pretty.

What is the best gift you have ever received ?
My amazing friends and family.

What is your greatest extravagance ?
Not sure.

Favourite way to chill out ?
On the beach with family and friends.

What is your most admirable quality ?
Always being there for my sister.

If you had to watch sport on television, what would it be?
Netball or rugby.

What food could you not live without ?
Chocolate and lollies, all the good stuff.

Which mean do you cook the most?
Nachos, quick and not too hard.

What is your biggest regret?
I don’t think you should live with regrets as everything happens for a reason.

What is your greatest achievement?
Playing for the Aotearoa Māori Secondary School netball team in Adelaide this year.

Neena Woodgate, 17, was chosen for the Aotearoa Māori Netball Secondary School team this year, the only kōtiro from Te Waipounamu. Within 10 days of being named in the squad, Neena was immersed in a two-day training camp in Auckland, and was then off to Adelaide for the Trans-Tasman Secondary Schools tournament.

Aotearoa Māori lost to Australia by four points in extra time, in a semifinal tagged “the game of the tournament”.

The St Margaret’s College Senior A team is the only secondary school team in the second round of Premier 2 Saturday netball in Christchurch, and is aiming for a top five finish at the South Island Secondary Schools tournament in Dunedin. This would put them in the top 16 secondary school teams in the country, and therefore in the New Zealand Secondary Schools Championship.