Philip Hewitt describes himself as a “boy from Invercargill”, but a career in international relations means he is more well-travelled than most. Last year, Philip was appointed as Ambassador to Timor-Leste, his fourth international diplomatic posting. But despite his high-ranking position, Philip has maintained his humble Kiwi spirit. When I requested an interview with only a day’s notice he replied, “You know what, I can make that work.” Nā ALICE DIMOND. 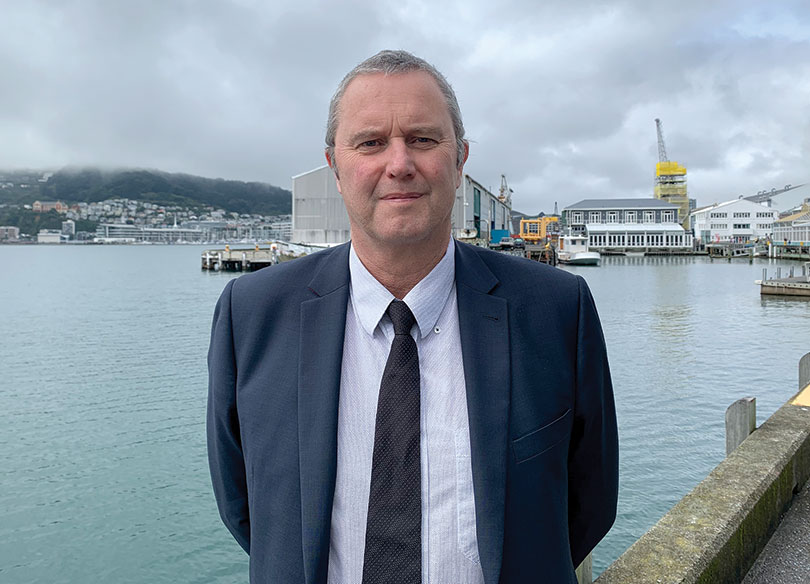 Above: Recently appointed Ambassador to Timor-Leste Philip Hewitt, photographed on the Wellington waterfront.

Eighteen years ago Philip Hewitt (Ngāi Tahu – Te Rūnanga o Ōtākou) applied for a job at the Ministry of Foreign Affairs and Trade, which led to his first role in Aid and Development. From there, Philip hasn’t looked back.

Philip first began thinking about working in international relations when he travelled overseas after university, where he completed a degree in economics. “Going overseas was a real eye-opener for me in terms of thinking about New Zealand’s place in the world,” Philip says. “Travel taught me about the disparity internationally for basic things like health, education, employment, and human rights.”

This realisation motivated Philip to pursue a career that would allow him to improve fairness and equity around the world. Thanks to New Zealand’s international policies and commitment to supporting developing nations, his work as a diplomat has been focused on
just that.

Beyond the politics and policies, Philip says the crux of his work is simply generating positive change. “I really just want to ensure everyone has a good chance of having a great life,” he says.

In May, Philip will be relocating to Timor-Leste (also known as East Timor) for three years as part of his role as the New Zealand Ambassador to this small island nation.

Timor-Leste, in Maritime Southeast Asia, consists of the eastern half of the island of Timor, the nearby islands of Atauro and Jaco, and Oecusse, an enclave on the western side of the island.

Aside from Oecusse, the western half of the island is under the sovereignty of the Republic of Indonesia. In 1975, Timor-Leste was invaded by the Indonesian military. What followed was a decades-long occupation characterised by extremely violent conflict and oppression.

Indonesia relinquished control of the territory in 1999 following United Nations intervention, and Timor-Leste was recognised as a sovereign state in 2002. New Zealand made a significant defence and security contribution to the establishment of the new nation, but as the situation has improved, our military and police became less involved and the focus has turned to supporting Timor-Leste’s growth into a stable, democratic, and prosperous nation. Philip’s role will support these efforts, and maintain the warm relationship that New Zealand and Timor-Leste share. 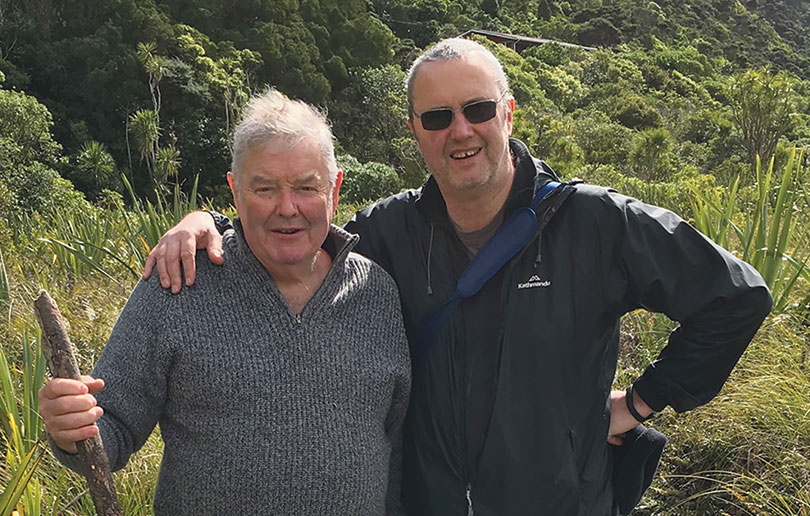 Above: Philip with his father Richie, who has been instrumental in his reconnection to Ngāi Tahu.

Philip visited Timor-Leste last year prior to his appointment and is reassured that although he will be far from New Zealand for the next three years, there are threads of connection that will keep him from feeling homesick.

“There is an affinity in the way our cultures think about the world,” Philip says, explaining that this has made it easier for New Zealanders working in Timor-Leste to perform their duties. “The New Zealand Defence Force has been really embraced for their approach, their style, and their openness.”

The Kiwi influence has extended so far that at one point Philip even heard the familiar tune of Pōkarekare Ana being sung by locals, and would often be greeted with a “Kia ora!” after he introduced himself as a New Zealander.

These little snippets of home may help ease some of the challenges of moving offshore, but after a number of stints abroad, Philip says the real challenge is actually returning to New Zealand.

“Although it is really hard to adjust to a new culture and way of working, coming home can be difficult too,” he explains. “All your family and friends have moved on from when you left, and they don’t really hold a spot for you to just jump back into. I have had to become mindful of that.”

But he is quick to state that the positive aspects to his international postings have always outweighed the negative. The opportunity to bring his children abroad with him has exposed them to a number of different cultures and broadened their perspective of the world.

“They are pretty international children, and have lived in Apia, Bangkok, and Jakarta,” says Philip. “But they love being home, and are really Kiwi kids now.”

Their global upbringing means Philip’s children have spent time in developing countries with widespread poverty, and Philip says they were surprised when they returned to Aotearoa and realised that poverty exists here too. “When they came home there was a point where they were having to give other kids at school food. They were quite horrified,” says Philip.

On a more positive note, spending recent years in Aotearoa has given the kids the opportunity to learn some te reo Māori. Philip’s wife and his father have also been learning, and Philip jokes that he’s struggling to keep up. “I think I am the only one who hasn’t learnt any Māori,” he laughs.

The early death of Philip’s maternal grandmother has meant that his connection to Ngāi Tahu has been more limited than he’d have liked, although he has always been proud of his whakapapa.

“Ngāi Tahu gave me a real opportunity in education and I have never forgotten that,” he says. “It is something I will always be grateful for.

“I have always felt a connection because of that, and have always maintained an interest in what Ngāi Tahu is doing.” 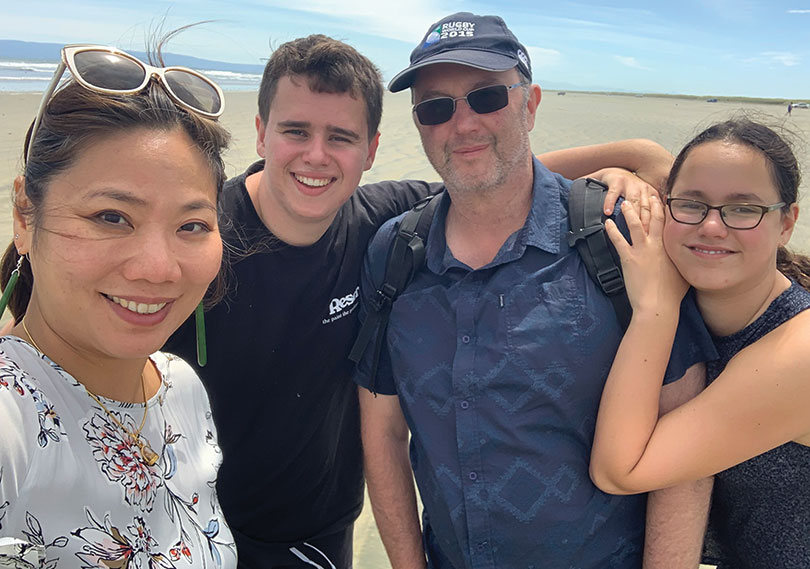 Above: Philip with his wife Romchalee Kanokngamwitroj, son Jacob and daughter Alexandra.

In recent years, it has actually been Philip’s Pākehā father who has reinvigorated the whānau connection, even reaching out to Puketeraki and Hokonui rūnanga and working with them over the last few years.

“He is really interested in Māori history, so his connection and interest has helped us to better understand our own relationship, particularly around how Māori existed and worked and lived on the land prior to European arrival,” says Philip. “He has been a really big influence and has made me think about my connection to Ngāi Tahu and how important that part of my life is.”

His paternal grandparents have also had a huge impact on his life.

“My grandfather used to show us where Māori used to live and the remnants of their ovens. At the time I never thought about the fact that he was talking about my relations. They would have been Ngāi Tahu people, but as a child I never made that connection,” says Philip.

“That was a sad part of growing up. It wasn’t a deliberate thing, it was just something that happened. I can look back now though and think, ‘Oh, that’s what Grandad was talking about.’”

Philip speaks fondly of his time spent with his grandfather as a child in Ōtākou at Te Hakapupu (Pleasant River), collecting mussels and pāua. “My grandfather taught us about sustainability and access and management of resources – things that have become so important these days. We never took more than we could eat.” These experiences, although seemingly simple, have grounded Philip and formed the person he is today, amid a successful career.

“My parents and grandparents always demonstrated how to support each other, be kind, and show respect,” Philip says. “I always try to treat people with kindness and respect, whether that is globally, or here in New Zealand. I think those things can go a long way.”