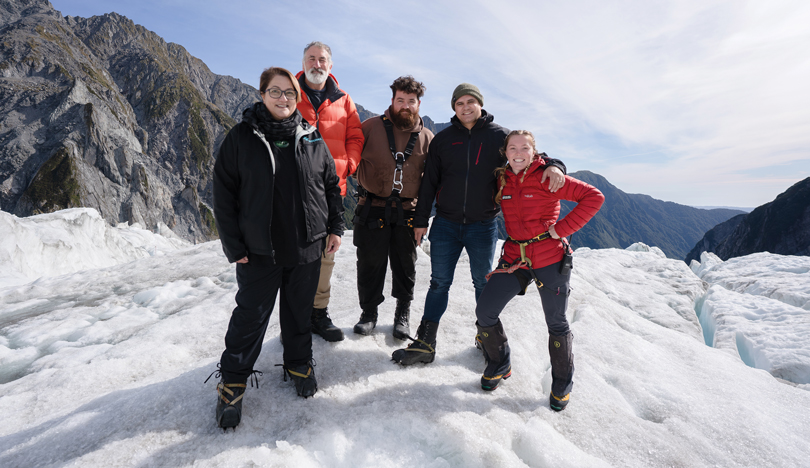 It came as something of a physical shock. a blow to the senses. To visit Kā Roimata o Hine Hukatere for the first time in eight years, was devastating. This mighty glacier, that sits among the ancestors, a taonga of our people, a presence once so physically commanding, is shrinking into oblivion.

Kā Roimata o Hine Hukatere has been subdued, humiliated by the actions of humans, actions remote yet undeniable. To see this retreating giant is to understand impermanence, to understand the real and terrible results of industrialisation, of climate change.

Renamed Franz Joseph by Pākehā explorers, Kā Roimata o Hine Hukatere was the original Māori name given by our tīpuna. It literally means the “Tears of the Avalanche Maiden”.

Our ancestors framed the creation of this glacier as a love story that ended in tragedy.

The legend describes how Hine Hukatere took her lover Wawe into the mountains. Traversing the ranges where the glacier now lies, Wawe hurried to keep up with her, he slipped, tumbling to his death. Hine Hukatere watched him fall but could not prevent his death. “Her grief was so pronounced and her tears so excessive that the gods froze them as a perpetual memorial of her regret and sorrow.”1

In April 2022 I was privileged to travel with a film crew to see the frozen tears of Hine Hukatere. We were shooting a video to launch the Ngāi Tahu Group climate plan, released this month. Returning to this remarkable place on Te Tai Hauāuru (the West Coast) after nearly a decade away, I had my own mourning to do. The glacial retreat was way further than I had expected. I was ready to add my own tears to those of Hine Hukatere, maid of the avalanche.

This was climate change happening before my eyes. Once again, I was convinced of the importance and urgency of the climate mahi. Scattered down the curving valley below the glacier is a series of redundant viewing platforms. None of them give you a view of the ice.

Global warming is measured by scientists from around the time the 1867 picture was taken. To me it’s a chilling illustration of how the climate crisis has crept up on us. NASA says the planet’s average surface temperature has risen about 1 degree Celsius since the late 19th century. A change driven largely by increased carbon dioxide emissions into the atmosphere and other human activities.

Kā Roimata o Hine Hukatere has disappeared around the corner, out of sight, shyly withdrawing towards the shrunken snowfields, into the arms of the alps. Each platform serves as a way-marker of time, the retreat of the glacier, the worsening climate crisis. For a global emergency which is often incremental and unseen, the demise of Kā Roimata o Hine Hukatere is a stark reminder. Clear evidence of the effects of human-made greenhouse gas emissions. 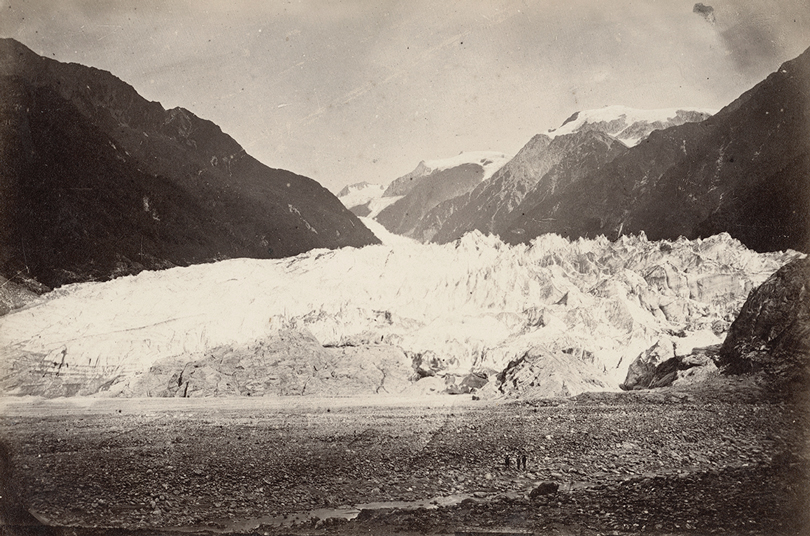 Franz Joseph glacier, Waiho River, Westland – above, commonly accepted as the first known photograph of the glacier, 1872; and below, the glacier as seen today. 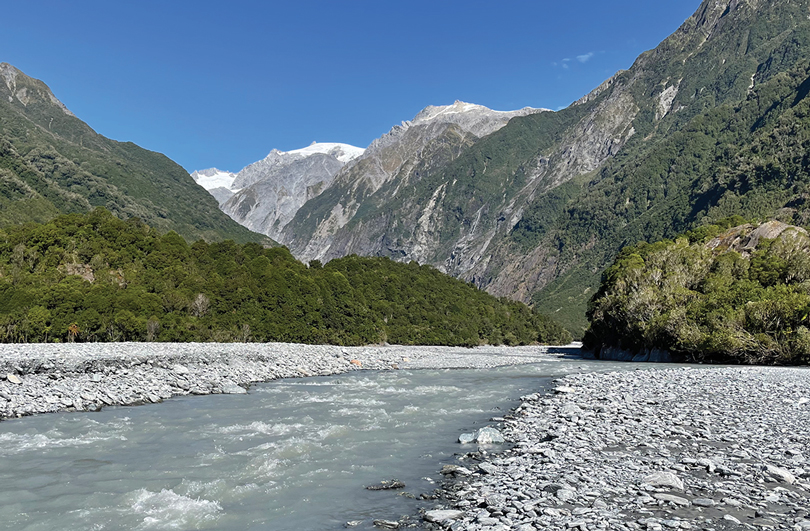 One of the amazing guides I met on the glacier had only been working there for five years, but the guiding operation had already had to move in that time due to climate change. I could see her passion and commitment to the glacier, as she shared what she had experienced. It was an emotional moment for her and the pain and hurt in her eyes was clear. She pointed out some of the special places on the glacier where the guides used to take people when they first started. There was no ice there now, only rock, and terminal moraine.

Global warming is measured by scientists from around the time the 1867 picture was taken. To me it’s a chilling illustration of how the climate crisis has crept up on us. NASA says the planet’s average surface temperature has risen about 1 degree Celsius since the late 19th century. A change driven largely by increased carbon dioxide emissions into the atmosphere and other human activities.2

According to Taihuro Nukurangi (NIWA – the National Institute of Water and Atmospheric Research), many of the glaciers of Te Waipounamu may be gone within a decade.

“What we’re seeing is a clear retreat, which is no doubt thanks to climate change,” says principal scientist Dr Andrew Lorrey. “In a decade, we predict that many of our beloved and important glaciers will be gone.”3

The ice storage of Kā-Tiritiri-o-te-moana (the Southern Alps) has been in decline ever since they started measuring it in the 1970s.4

In the last four decades the mountains have lost an estimated 15.9 trillion litres – that’s 6.26 billion Olympic swimming pools worth of frozen water.

The devastating ice melt of Kā Roimata o Hine Hukatere is more than just a physical loss, it is a spiritual depletion, a depreciation of our ancestral heritage and devaluation of our past. 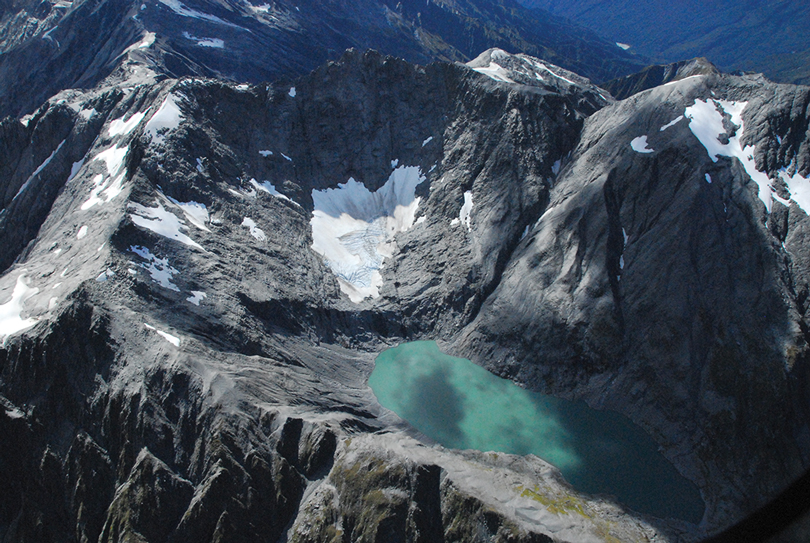 Our tīpuna regarded the mountains of Kā Tiritiri-o-te-moana as the embodiment of the ancestors. They found passes and pathways through the alps to gather mahinga kai and bring back the treasured pounamu from Te Tai Hauāuru. They did not make a habit of climbing the peaks as this would be standing on the heads of our ancestors – an act of disrespect.

One of our whānau, Ngāi Tahu author and climber Nic Low, explores that tension in an interview about his new book Uprisings:5

“I mounted an expedition to not climb Aoraki/Mount Cook, to set out up the Linda Glacier route and to find out just how far I would go to pay my respects, to not think about it in terms of conquering the mountain or standing on top of his head, because Ngāi Tahu asks that climbers do not stand on the very top of Aoraki … I just wanted to go to his shoulder to speak aloud some of our old traditions, to mihi (pay tribute) to him from right up close.”

It is so important that we keep alive stories, traditions, personal connections to the fast-disappearing parts of nature. These stories are vital in helping us to understand and adapt to our changing world.

One of the fundamental problems in trying to get people to act on climate change is that it’s so hard to see and imagine. 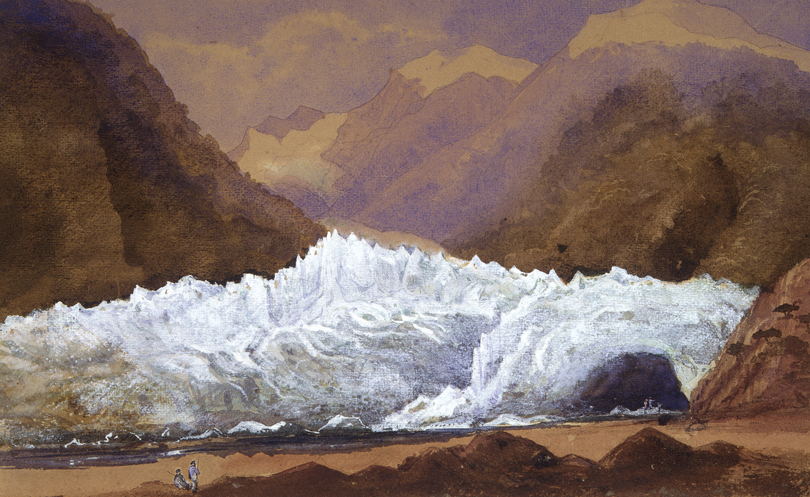 Above: Water colour painting of the view from the face of Franz Josef Glacier; Mounts Roon and Moltke centre and right (1872).

“Climate is quite possibly the most boring subject the science world has ever had to present to the public”, says Jonathan Safran Foer. “There are very few versions of the climate change story that kindergartners could re-create, and there is no version that would move their parents to tears. It seems fundamentally impossible to pull the catastrophe from over there in our contemplations to right here in our hearts.”6

That is why the creation story of Kā Roimata o Hine Hukatere is so important. It offers up the narrative of tangible loss – one that we, as keepers of this history, tellers of this story, can relate to. It helps us to get our heads around the sad sequel – the tears of Hine Hukatere melted by climate change and running out to sea.

Within the Ngāi Tahu Group, we have asked ourselves some serious questions about how we are contributing to the melting tears of Hine Hukatere. Our climate plan contains 88 points to tackle these issues with the aim of protecting the environment and cutting emissions, while keeping our whānau and marae safe from the worst effects of climate change and helping them to co-create a better future. We are not saying that we have all the answers, not yet, but we are actively seeking solutions. It is worth repeating what we all know instinctively. The time is now. A time for tough and decisive action. We should be prepared to shed tears for Hine Hukatere but we should also be ready to act boldly in her defense.