He Aitaka a Tāne
Kānuka, a victim of mistaken identity

It is often difficult to tell the difference between some of our native plants, particularly closely related species. But, if ever there was a victim of mistaken identity, it has to be kānuka.

Mention of its name in polite company often causes people’s eyes to glaze over vacantly. Most Kiwis are familiar with mānuka and assume you are either confused or your knowledge of te reo Māori is even worse than theirs.

Any confusion between the two species is hardly surprising. They are very similar to look at, and until 1983, kānuka was classified as Leptospermum ericoides, in the same genus as mānuka (Leptospermum scoparium). Kānuka has now been reclassified as being in the genus Kunzea.

Until the 1930s, both species were popularly known as mānuka, sometimes with the qualification of white mānuka or white tea tree for kānuka, and red mānuka or tea tree for mānuka.

There are plenty of visual clues to differentiate the two, but the easiest and most conclusive way to tell the difference between them is the touch test. Kānuka has a finer, softer texture while mānuka is very prickly and sharp. 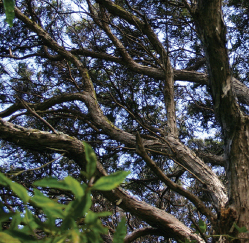 A mature kānuka makes a fine specimen tree up to 15m tall, with a trunk up to 60cm in diameter, whereas mānuka grows up to eight metres. Kānuka often forms an open canopy on sunny faces, with an under-storey of ferns growing around its flaky bark trunks.

Kānuka are very hardy and often colonise land after a fire or bush clearance. They are widespread from coastal bush at sea level up to 900m in altitude, and grow as far south as Ōtepoti (Dunedin) on the east coast of Te Waipounamu.

Kānuka’s limbs can sprawl far and wide, whereas mānuka has an upright growth habit. While this is a good indicator for mature specimens, it is not that helpful for identifying seedlings.

In our patch of bush, a mature kānuka tree on a sunny face on the edge of the canopy is always the first to flower – within a few days of December 1 – and the rest of the trees in the canopy always follow suit in the same sequence every year.

Such precise timing and a staggered flowering is very convenient for honey bees because when the kānuka nectar starts to flow, our bees abandon all other food sources and home in on the good oil.

If we’re lucky, the flowering continues steadily until the end of January, providing a fantastic nectar source for beehives strategically placed in a sunny clearing in the bush to harvest kānuka’s distinctive amber-coloured honey.

A single hive can produce up to 30kg of liquid gold, which experts tell us has all the same bioactive properties as mānuka honey, although the flavour is more subtle, with a hint of caramel or butterscotch. In our house it is used as a cheap, locally sourced, and healthy substitute for sugar in tea, baking and cooking.

In Māori Healing and Herbal, Murdoch Riley confirms the herbal and medicinal properties of mānuka and kānuka have been found to be virtually the same. Recent research suggests that both have anti-viral properties, and have proved effective against common drug-resistant bacteria.

In traditional Māori rongoā, the leaves of both mānuka and kānuka were boiled and the liquid was drunk to help liver and kidney function. Historical sources say mānuka and kānuka were also used to help breathing difficulties caused by blocked sinuses, hay fever, and to a certain extent bronchitis and asthma.

Gum obtained from the green bark of kānuka apparently relieved coughing, and was also applied to burns and scalds. To relieve stomach ache, the green fruits were chewed thoroughly and the juice swallowed. Kānuka seed capsules were pounded to make a poultice to treat running sores.

As its former botanical name suggests, kānuka contains leptospermone, a natural insecticide and effective remedy against intestinal parasites. Apparently, clever kākāriki (native parakeets) figured this fact out for themselves, and have been observed to chew on the leaves and bark to rid themselves of uninvited guests.

The leaves of both plants are well known as a substitute for tea and for brewing bush beer. A teaspoon of fresh leaves dropped into boiling water makes a pale brew of tea, but if left too long it develops a bitter taste.

Modern kitchen-savvy navvies suggest the leaves can be dried by wrapping and zapping them in a microwave for a minute, chopping them up finely and using like normal tea for a refreshing aromatic brew.

A small handful of mānuka leaves in a teapot sweetened with kānuka honey is the brew of choice as an all-round seasonal tonic in our house. Tea brewed from kānuka leaves has a similar taste, but has a more subtle flavour.

Kānuka produces a durable, dense hardwood that burns with a fierce heat when dry, a fact that has sadly contributed to the disappearance of big stands of bush in some parts of the country.

Māori had a multitude of uses for its timber – everything from weapons, clubs and mauls to digging tools, canoe paddles and spinning tops. In the right conditions, young kānuka saplings grow long and straight, ideal as spear shafts that were much stronger and stiffer than other native timbers used for this purpose.

Kānuka’s flaky bark peels off in strips like that of mānuka and tōtara, and there are historical records of its inner bark being used as a durable, waterproof material for weatherproofing dwellings.

I like to think of mānuka and kānuka as first cousins working together to nurse regenerating native bush back to full health. Ironically, both species were once indiscriminately cleared from hill country for pastoral farming, yet today the honey exports from mānuka alone are probably more valuable than the livestock that replaced them.

Modern science is really only just scratching the surface of why these taonga plants were so important in traditional Ngāi Tahu rongoā.