Twenty-nine-year-old Nikora Heraka Mahakanui Rautahi-Mahuika candidly admits he had a tough start in life, saying that being a barber was never something he envisioned for himself. Nā Rob Tipa. 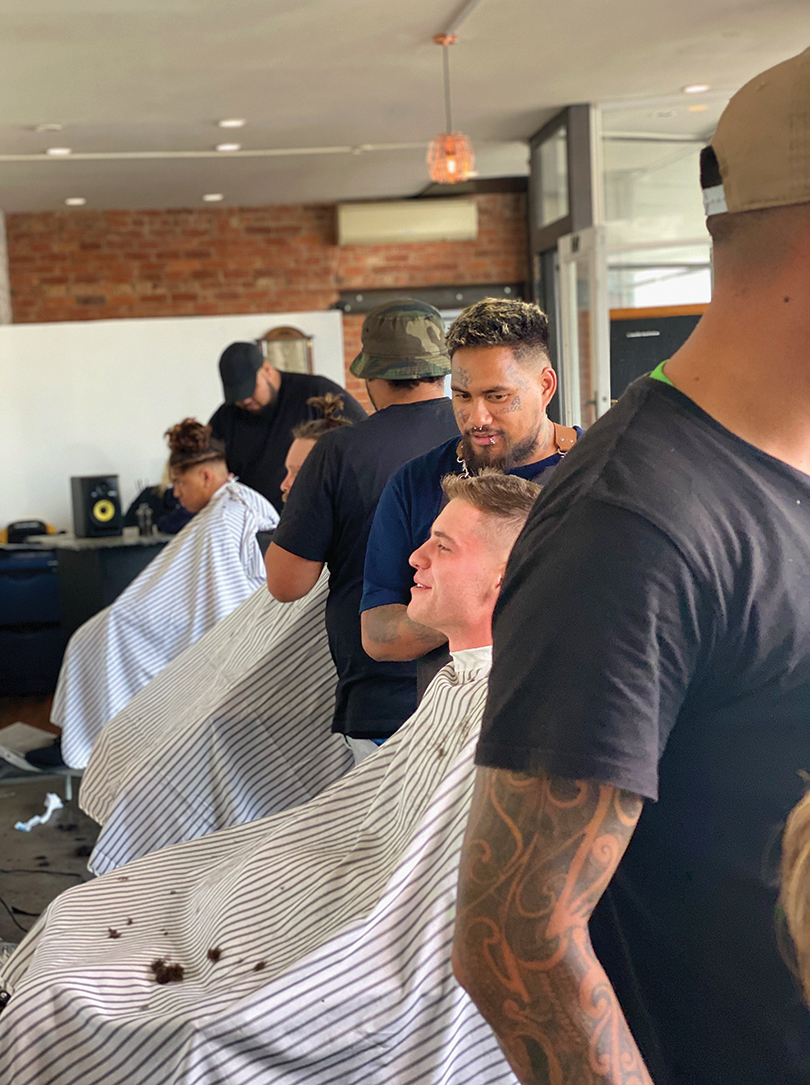 Above: Nikora Heraka Mahakanui Rautahi-Mahuika sees his flourishing Georgetown Barbers business as a stepping stone to a broader vision to create a social and cultural hub for young people in Invercargill.

“It chose me. I never planned any of this,” Niko says of his flourishing shop Georgetown Barbers on the fringe of Invercargill’s central business district.

“I was brought up in CYFS (Child, Youth and Family) care so I shifted around a lot, all around New Zealand but mostly the South Island,” he says. “I call Invercargill my home because I have spent most of my time down here.”

About eight years ago he started cutting hair for his son and brothers and the idea of becoming a barber snowballed from there. His career choices at the time were either farming or barbering. Farming didn’t work out so he completed a three-month New Zealand Barber Skills Certificate course in Auckland.

Two years ago he was homeless and living in a van in Invercargill. He got a job as a barber but felt the focus of that particular business was more on quantity than quality of haircuts.

“I didn’t like that so I opened my own business,” he says.

A natural entrepreneur with a great eye for an opportunity, the idea dawned on him when he saw an empty suburban shop in Invercargill with a ‘for lease’ sign in the window. He thought it looked like a barber’s shop.

On a whim he contacted the owner, found the lease was affordable, signed up and started Georgetown Barbers on a shoestring.

Without a business plan or any gear, he went to his brother, a contract milker on the West Coast, for business advice and enough start-up capital to set up shop.

He also had the backing of his partner, Ashlee Carr, who moved south with him after they met in Auckland.

“She has good business skills, is well-organised and brings order to our chaos,” Niko says.

Within a few months Niko’s solo business was booming, tapping into a niche youth market with its unique blend of traditional barbering techniques and modern hairstyles.

Niko realised he had enough support to expand his business quickly with more chairs, more barbers, bigger premises and a stronger turnover. In February he moved from his small suburban shop into a larger leasehold property in the central business district, taking his loyal customers with him.

“We’re the only barber shop of its kind in the city catering for young people,” he explains. “We wanted to create a barber’s shop in Invercargill where every barber was good, so no matter who you got to cut your hair, you’d get a good haircut.”

He started tracking down the best barbers in town – even stopping people in the street to ask who had cut their hair – and invited the best to work for him. 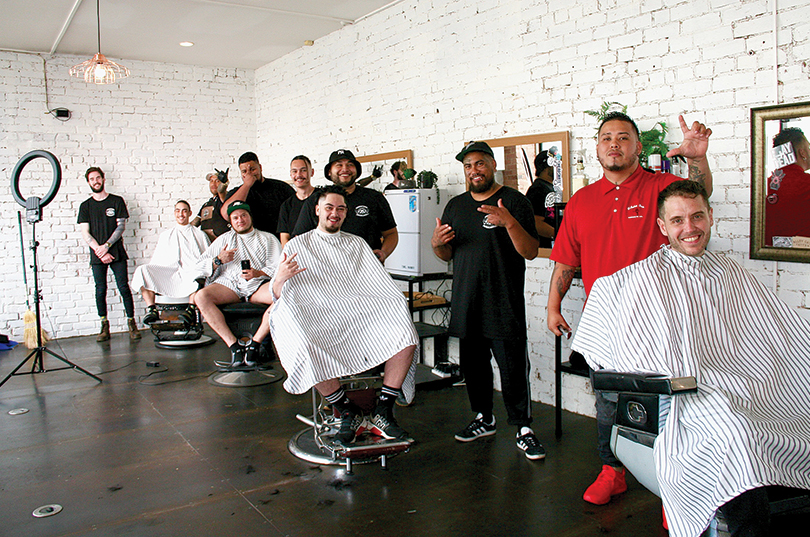 Above: Georgetown Barbers kaimahi and clientele, including Nikora Rautahi-Mahuika third from right.

One of Niko’s newest barbers is Colombian refugee Jhoan Bedoya.

“I saw his work online, I heard about him, I stalked him, I found him and asked if he wanted to come and work for me,” he laughs.

Just one year later, Georgetown Barbers is a vibrant hub of youthful energy, pulsing music, lots of laughter and spirited banter between barbers and clients.

The business is strongly based on social media to reach its target market of young people.

Niko is the first to admit his management style is “pretty unorthodox” but his vision to create a relaxed, friendly and homely atmosphere for staff and customers is obvious.

He built a strong core of repeat clients and the barbers he has taken on each bring their own following of loyal clients with them. They are employed on commission and contract their services to Niko.

“That in itself teaches you how to run your own business,” he says. “Barbers do their taxes and so on which I think is more meaningful for people rather than working on an hourly rate.”

While the business community in Invercargill is known as fairly conservative, Niko reckons it’s a great place to do business.

His confidence is contagious as he describes the potential for new business ventures in Invercargill, a city he says has ploughed more than $40 million into redevelopment of the central business district.

“If people are willing to put that much investment into infrastructure in the city then there’s a lot of potential for new businesses,” he says. “If you open up any niche business down here people are going to flock to it. It’s just the nature of Invercargill.”

But as successful as Georgetown Barbers is in its first year of operation, Niko regards it as just a stepping stone towards his wider vision of building a social and cultural hub that fills a void for Southland rangatahi.

“People come to a barber at their worst time of life and their happiest time of life and barbers are in a perfect position to listen to them. A lot of my barbers come from a colourful background, like myself, and I feel they could be good role models for young people down here.”
Nikora Heraka Mahakanui Rautahi-Mahuika

A barbers’ shop is a great place to engage with clients who want to talk about their interests in social culture and to gauge their market preferences and tastes in things like music, food and clothing. It’s also a place to find like-minded people who might be able to offer each other support.

“A lot of my barbers come from a colourful background, like myself, and I feel they could be good role models for young people down here.”

For example, he recently met a young person who came through some of the same residential foster homes he had, and his story resonated with Niko.

“I just feel we could make a positive impact with the youth down here.”

Eventually he would like to open a barber academy; really just an extension of what he is already doing to share the skills he has learnt with other young people like himself, who are looking for a break. 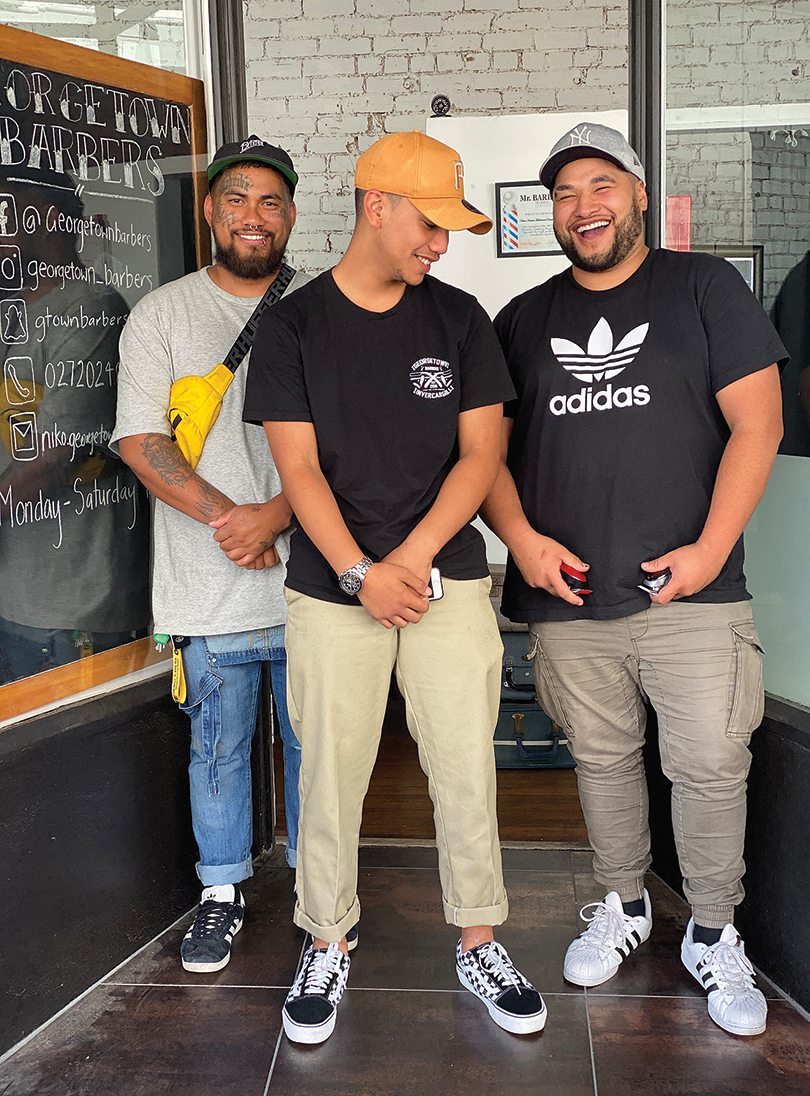 Above: The Georgetown Barbers crew happy in their mahi.

He has already secured the lease of an empty building across the road from Georgetown Barbers on Spey Street. He plans to open a store specialising in vintage clothing, a retailing formula he says has been well proven in larger centres.

Looking ahead a few more years and Niko has a vision of opening at least one barber shop franchise outside Invercargill. His long-term goal is to franchise the Georgetown Barbers brand so he can focus on a bigger picture of giving young people places to meet, socialise and share cultural interests.

“I see this as an opportunity to grow my business and help out other people as well by employing as many people as I can,” he says.

He also sees potential to open a nightclub in the city, which he believes has little entertainment for young people.

Niko has turned to Te Rūnanga o Ngāi Tahu for business advice and the iwi has matched him with a mentor and an accountant. He has been paired up with a local woman who has run two prestigious hair salons in Invercargill for 16 years.

Niko says she has plenty of industry expertise and general business advice to share and can help point him towards becoming a barbering tutor.

So far, he has only had three meetings with his accountant, but those sessions have already proved worthwhile.

While he has an application in the pipeline for financial support from the Ngāi Tahu Fund, Niko says what he really values is the knowledge and resources offered by mentors and the accountant
he has been connected with.

After his first year in business, Niko admits it has been fairly stressful. He didn’t know what to expect and is learning as he goes.

“We’re getting there,” he says. “We’re pretty successful for the time we’ve been going.

“I don’t do what I do for kudos or anything. I just do it because I can. I came from such a tough background I shouldn’t be in this position.”

This is one young man with the confidence, energy and drive to achieve anything he sets his sights on.