Maru Nihoniho has been making plays and smashing stereotypes as the founding CEO of game development studio Metia Interactive, and providing a platform for rangatahi to transform their thinking. In creating games for companies like Nintendo, PlayStation, and Xbox, she’s putting Aotearoa on the map. Kaituhi Madison Henry-Ryan catches up with Maru to kōrero around her entrepreneurial journey as an influential mana wahine in the digital realm. 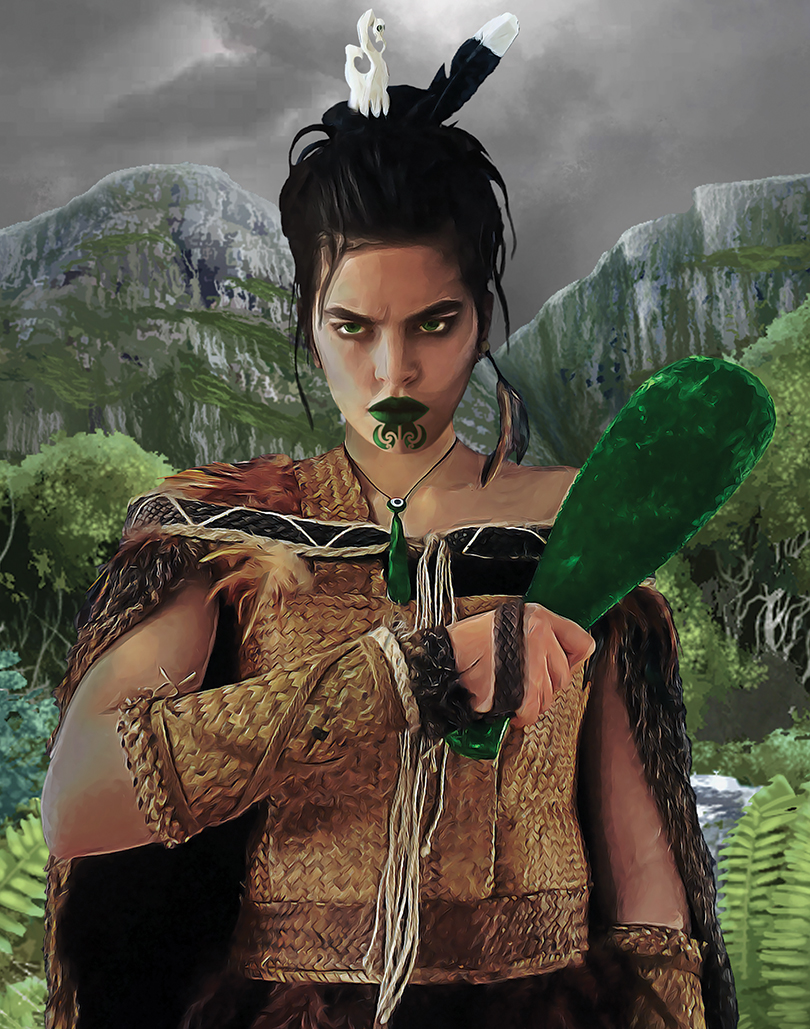 Above: still image from Guardian Maia.

“It all started with fish and chips and spacies machines.” Maru began her presentation with finesse at the recent Whānau Ora Symposium held at the Christchurch Town Hall. Although she has shared her story many times with a range of audiences, this occasion in particular sparked some Mahuika fingernail fires in the eyes of an awe-inspired audience of Māori entrepreneurs, whānau, and rangatahi. Everyone was a fan, because Maru’s journey is both unique and relatable.

A proud mother of three, Maru (Ngāti Porou, Te Whānau a Apanui, Ngāi Tahu) founded Tāmaki-based Metia Interactive in 2003. The company has gone from strength to strength, and along with her hearty team of developers, Maru has acquired some tidy accolades and achievements.

As a budding young Māori entrepreneur myself, making plays in the Māori tech and innovation space, Maru keeps popping up on my radar with pockets of success. Last year I noted Maru receiving the Māori Entrepreneurial Leader Award from the University of Auckland, alongside the likes of other flourishing tech innovators, such as Kendall Flutey (Banqer). I also had the opportunity to speak alongside Maru at the Ko Māui Hangarau event in Tauranga in 2018.

Given her Master of Technological Futures with Tech Futures Lab focused on emerging tech and social innovation amongst our rangatahi, it’s not surprising that all the games produced by Metia are educational, interactive, and designed to address social challenges and cultural narratives.

Her games include the puzzle game Cube for PlayStation Portable (PSP) and SPARX, a game specifically designed to combat depression in rangatahi Māori. Maru was recognised for this by being made a member of the New Zealand Order of Merit for services to the gaming industry and mental health. Tākaro aims to encourage rangatahi Māori towards STEM pathways – science, technology, engineering, and maths. Guardian Maia is an ongoing passion project which explores Te Ao Māori as an adventure role-playing game (RPG). All of these games have won multiple awards in the tech and entrepreneur space.

Maru grew up in Tuahiwi, travelling into Ōtautahi to attend school. She describes the juxtaposition of country life and city life as being reflective of her two worlds colliding: Te Ao Māori and Te Ao Pākehā. 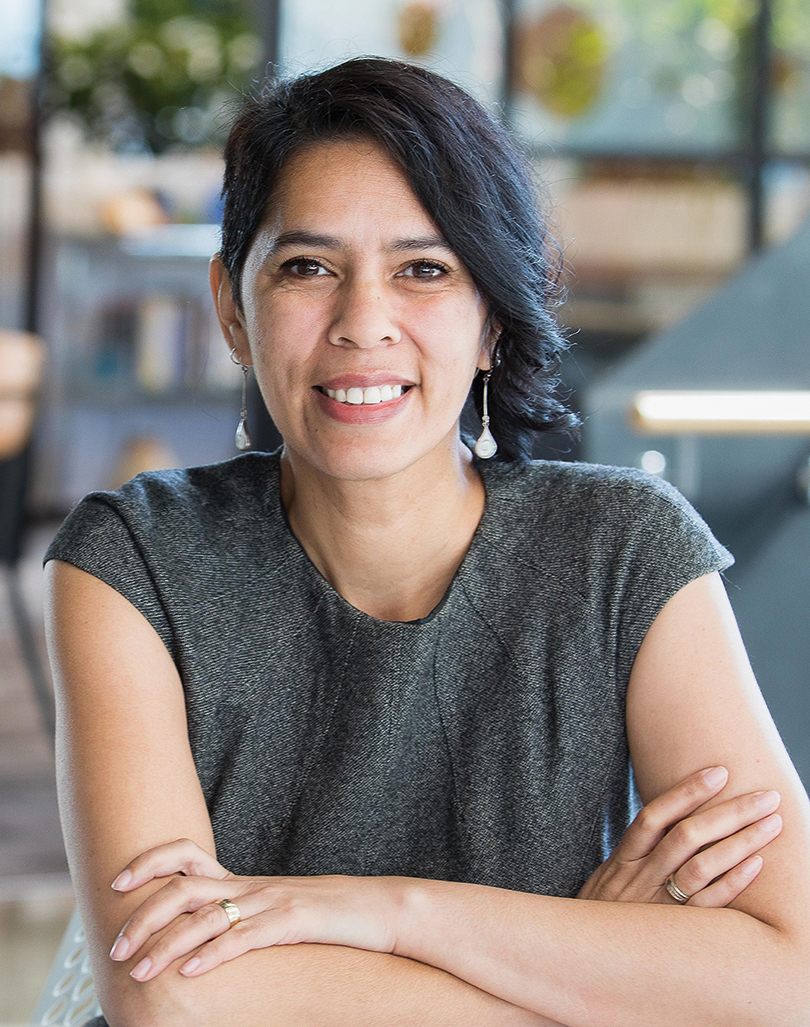 “I felt kind of lonely whenever we came back into town when I was going to (the former) Sydenham Primary School,” she recalls. “I didn’t know anyone and I was probably the only Māori in my classroom, and we weren’t learning te reo like we were at Tuahiwi.”

Her mother used to send her to the fish and chip shop, where she discovered spacies machines and would jam out for extended periods of time, often leaving the food to go cold.

“Where’s the change?” her mother would ask. “Oh … they’re in the games, Mum,” Maru would reply.

“Instead of being disappointed, she knew quite early on that I was keen on playing games, and she didn’t discourage it – she encouraged it,” Maru says. “In fact, Mum used to encourage me to be really creative as well.”

Maru and her colleagues have continued to implement kaupapa Māori themes within the business. “For us, it’s about bringing those of our team who are non-Māori into our world, and embracing them so they don’t feel like, ‘This is too hard’, or ‘I’m not Māori, maybe I shouldn’t be learning this stuff.’”

They dedicate time each week to developing an understanding of hauora models, tikanga, and te reo Māori exercises, to keep everyone on their game.

“Nearly all of our games are in te reo Māori, and a lot of our non- Māori staff are the ones putting the content into the game engine.

“It’s vital they have an understanding of what they’re dealing with, because that brings diversity into what I do, and into some of the games we create as well.”

Maru’s Master’s thesis provides insight into how games can encourage rangatahi to study and embrace technological subjects at tertiary level. Her research tested this on 400–500 students nationwide and led to the creation of Tākaro – a game that enables rangatahi to see themselves and their efforts reflected through discovering concepts. “If our young people are able to solve complex problems in games like Tākaro, then they are fully capable of being able to solve them in real life, because the problem-solving structures are very similar in terms of what’s out there for programming robotics,” Maru explains.

“SPARX was developed with feedback from user groups, and it’s opened up a way for others out there in the mental health space to develop apps or games. It’s about adding to the help that is already available, and providing additional tools and resources that can help the people working on the ground with our rangatahi. There will never be a shortage of scope for developing these types of projects in digital form. There’s plenty of room for them, and plenty of need for them.”
Maru Nihoniho Ngāti Porou, Te Whānau a Apanui, Ngāi Tahu

Maru’s first big deal was struck after pitching the early stages of action-adventure game Guardian Maia overseas. “I didn’t have the team, and I was thinking about it the wrong way around too, I suppose,” she says. “I figured, ‘Just give me the money and I’ll make the game anyway.’ That’s how confident I felt.”

However, after running into some reality checks, she soon realised she’d have to improvise something more realistic to prove herself to interested publishers. Cue a clever shift in thinking, and another game was born: Cube.

“I spent close to a year pitching that idea before I finally got the deal,” she recalls. “The publisher said, ‘How much money is it going to cost to make this game?’ I went back and said, ‘About half a million dollars.’ He said ‘OK, I’ll send over the agreement.’”

That was the moment when Maru realised that he was serious. Her lawyer warned her that she would be lucky to make any money off this game. Maru then faced a decision: take the deal and get her foot in the door, or seek another publisher in the hopes of making a profit.

“I sat there and I thought about it for a minute. Then I said, ‘You know what, I’m getting really tired. I’ve been pitching this for nearly a year, and that’s after having spent a year pitching Guardian Maia. I’m going to sign the deal and get my foot in the door.’”

When Maru received her first deposit, she was able to expand her team from three to 10. “We got the game built in about a year, and it was published the following year – it was really cool, and such a huge sigh of relief!”

Since then, the games created by Metia Interactive have all served a specific purpose – whether that be educating schools about kaupapa in the digital realm, te reo Māori or tikanga-themed games similar to Māori Pā Wars, or games that address youth mental health issues.

“Rangatahi Māori have high rates of depression,” Maru explains. “So what we’ve done is develop a game with the University of Auckland. SPARX was developed with feedback from user groups, and it’s opened up a way for others out there in the mental health space to develop apps or games.”

Maru is quick to say that games like SPARX are not intended to replace the role of traditional mental health practitioners such as social workers and psychologists. “It’s about adding to the help that is already available, and providing additional tools and resources that can help the people working on the ground with our rangatahi,” she says.

“There will never be a shortage of scope for developing these types of projects in digital form. There’s plenty of room for them, and plenty of need for them.”

Maru says it’s important to tailor a game for its intended audience. “Who are you creating it for?” she says. “You need them to engage with you and communicate how they feel – and from there work on integrating it into the design.”

To be able to think outside the Tesseract and thrive on cultural narratives is a niche that many Māori have recognised within our deep heritage here in Aotearoa. Maru wishes for people to normalise big thinking and pursuing ideas that may seem far-fetched or impossible. With this approach, you can make real progress.

“Back then, it was super ambitious to even consider creating games. My journey is proof that if you stick with an aspiration and focus on an idea, five years down the track, it becomes the norm.

“That’s what I mean around diverse thinking: encouraging kids who have crazy ideas sometimes, that they sound awesome. Embrace the big ideas. Embrace the fact that gaming is a powerful educational platform. It’s immersive and interactive for telling the stories of our future, which is what I’m all about.”