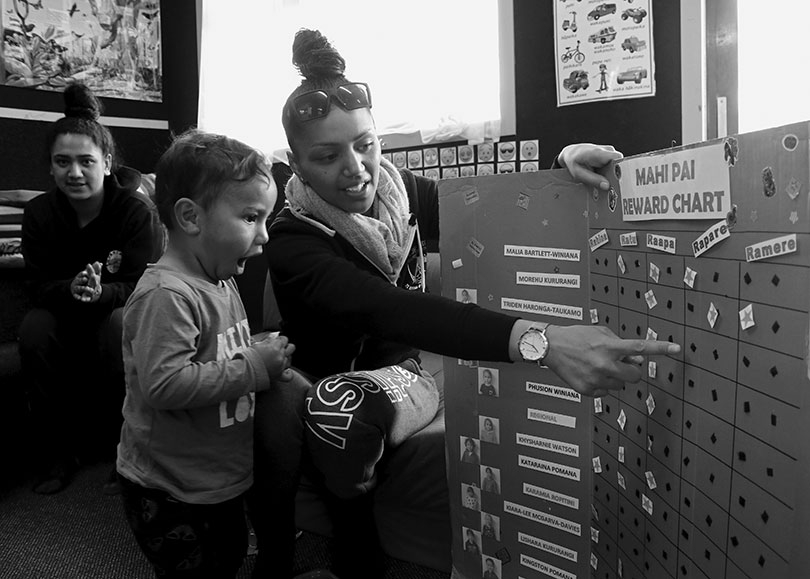 Harlem-Cruz Atarangi Ihaia surprised herself as much as anyone else when she won the title of Miss Universe New Zealand 2017. The young Ngāi Tahu woman happily admits she is most comfortable in her trackies and a hoody, so when she entered the contest she never thought she’d get past the first audition.

“I have a passion for acting and performing arts and I wanted to try something different,” says the 20-year-old Kōhanga Reo teacher from Napier.

Before she knew it, Harlem-Cruz (Ngāi Tūāhuriri) was invited to attend Stiletto Camp, and from there was selected as one of the top 20 contestants in the country vying for the title in Auckland.

“It was hard – I learnt so much about myself. I gained confidence by having to put myself out there and learnt I could be myself, but I had to be my better self.”

It’s this attitude that Harlem-Cruz brings to her life and work at Te Kūpenga o Mātauranga Kōhanga Reo.

“I can give our mokopuna a different way of seeing the world. One day I want to open my own kōhanga with its own philosophy, that is whānau-operated and modern thinking.”

During her year-long reign as Miss Universe New Zealand, Harlem-Cruz travelled to Las Vegas to represent her country in the International Miss Universe contest, as well as acting as an ambassador on trips to Manila and Thailand, before handing over her crown in August last year.

For now she is enjoying working at the kōhanga with her mother Sharon (Ngāti Kahungunu, Ngāti Porou) and studying towards her teaching degree to add to her BA in Te Reo Māori.

“I don’t do kōhanga for the money,” she laughs. “I do it because my heart is in it.”