Over the last 18 months many of our Ngāi Tahu whānau might have seen or heard references to Haea Te Awa emerging in our tribal publications and kōrero. Some will be very familiar with the term if they attended one of the Haea Te Awa wānanga at marae throughout Te Waipounamu this year. Others might only know that Haea Te Awa is the aspirational new plan developed by Te Rūnanga o Ngāi Tahu to guide the iwi into the future. And others again might be completely new to the kaupapa. So what can we expect from Haea Te Awa? Kaituhi Anna Brankin sits down with the programme’s architects to find out.

When Te Rūnanga o Ngāi Tahu first reached a settlement with the Crown in 1998, our iwi leaders knew that we would need a robust strategy to consolidate and grow our newly acquired resources.

Over the next two years, a working group of nearly 100 Ngāi Tahu whānau members undertook extensive planning and consultation to identify and define a single tribal vision that would carry us into the future. This was: Tino rangatiratanga mō tātou, ā, mō kā uri ā muri ake nei – the ability to create and control our destiny for generations to come.

This vision led to the creation of Ngāi Tahu 2025, a strategy that mapped out the pathway to realising our tribal aspirations through work streams including te ao tūroa (the natural environment), mātauranga (education), whānau (social development), and Ngāi Tahutanga (culture and identity).

Under the guidance of Ngāi Tahu 2025, Te Rūnanga has spent the last 20 years focused on strengthening our asset base through the commercial operations of Ngāi Tahu Holdings. This has created an annual distribution that has allowed Te Rūnanga to deliver a range of programmes that target those key areas identified within the strategy.

This approach has been necessarily centre-focused, as the iwi sought to build on strategic relationships with the Crown and government agencies throughout Te Waipounamu, and to establish itself as a thriving part of the national economy.

Twenty-odd years on, our post-settlement chapter is well and truly over, and it is time to build a new waka that will forge the way into the future. Our overarching vision of intergenerational tino rangatiratanga remains unchanged, but we need a new strategy that reflects the progress we have made so far, as well as the demands of an everchanging world – and that strategy is Haea Te Awa.

The term “haea te awa” means “slash the sky from the sea”, and is taken from a karakia performed by rangatira Rākaihautū during his voyage on the Uruao waka – a karakia used to provide a clear pathway to navigate the waka safely to Aotearoa. The term has been chosen to represent the strategy’s intention to clear a new pathway forward for the iwi as we navigate our path into the future.

Twenty-odd years on, our post-settlement chapter is well and truly over, and it is time to build a new waka that will forge the way into the future.

“Haea Te Awa has come about in direct response to the aspirations we heard from papatipu rūnanga, which were expressed through the Papatipu Rūnanga Aspirations Group [PRAG] presentations in 2017,” says Julian.

“There was a common theme that came out, which was the aspiration of regional rangatiratanga – a desire to deliver their own programmes, and to leverage the Ngāi Tahu name and mana to establish their mana whenua in their rohe, including a visible presence in the wider community.”

Throughout these presentations the metaphor of a hearth fire emerged, with Te Rūnanga being likened to a single roaring fire that has been tasked with providing light and warmth throughout the entire iwi. In reality, however, the heat of that fire is barely felt out in the regions, and our papatipu rūnanga said that they would each like their own fire, enabling them to express rangatiratanga within their respective takiwā.

“We’ve used the fire metaphor to give effect to the principles of regional rangatiratanga, and that’s led to the key programme of Haea Te Awa, which is regional development,” Julian says.

“What we want is a fire fuelling each of the papatipu rūnanga, enabling them to build skills and capability, creating employment, and bringing people back to the takiwā to work.” 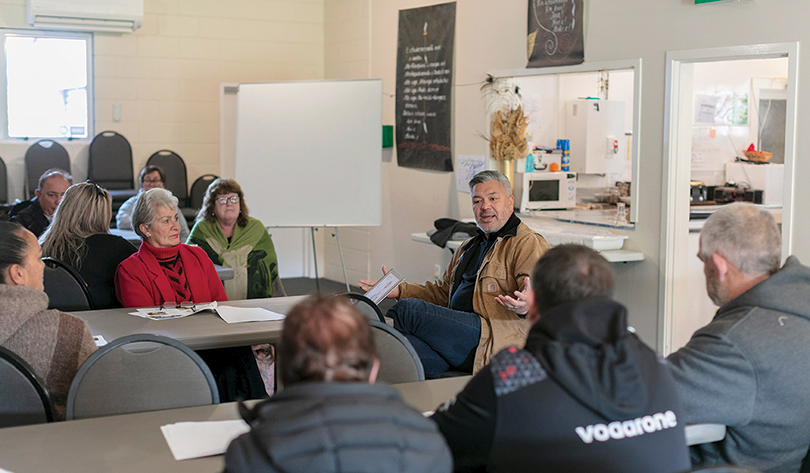 Above: Rakihia Tau delivers a presentation on Haea Te Awa to the whānau at Wairewa Marae.

According to Tom, these regional “fires” will fulfil a wide range of aspirations held by our papatipu rūnanga.

“The concept of regional development is that it’s not just about financial return,” he explains. “It’s about economic return creating jobs and business opportunities for papatipu rūnanga. It’s about social and cultural objectives like establishing mana and presence in the takiwā. And yes, it is also about the financial return of building profitable businesses.”

There are already a number of rūnanga-owned businesses that meet these criteria some of which are featured in this issue of TE KARAKA, the most successful of which is undoubtedly Whale Watch Kaikōura (page 40). The thriving marine eco-tourism business has not only stimulated the entire regional economy, but is truly a representation of the culture and history of Te Rūnanga o Kaikōura.

“I remember when Bill Solomon set up Whale Watch,” says Rakihia. “His vision was about employment for his community, and they have absolutely achieved that. On top of that, they have also had a great economic and commercial outcome in terms of the success of the business.”

For the past 18 months, Rakihia has been focused on developing the Investments Charter, a new document that will replace the Investment Policy Framework that currently guides the commercial activities of Ngāi Tahu Holdings.

“Our current policy has had an emphasis on financial outcomes, so it has been fulfilling a commercially-driven aspiration – not that that’s been a bad thing,” he says. “The Investments Charter will still do that, but we’ve got to get smart about how we deliver our goals.

“We’ll keep the best of what we’ve got in Ngāi Tahu Holdings, and we’ll set up a specialised entity to deliver the outcomes of regional development and economic self-determination for our papatipu rūnanga.”

These outcomes are the primary focus for Tom as he investigates options for pilot programmes.

“Will there be another one that looks exactly like Whale Watch? No, they’ll all be different. But is it realistic for each rūnanga to find opportunities either within their takiwā or in collaboration with other rūnanga that meet the right objectives? Yes, absolutely,” he says.

“It’s important to recognise that each rūnanga is unique and has their own sets of wants and needs that they’re working through. It’s not ‘one size fits all’, and we will be working closely with papatipu rūnanga to build their capability and competence where necessary, and help get them where they need to be.”

Over the next few months, whānau can expect to see more details emerging about the Regional Development Fund, as Haea Te Awa comes to the end of the consultation and engagement phase and moves into implementation.

And as Rakihia says, the future is bright. “Imagine 18 fires generating greater prosperity out in the regions, with that central fire of Te Rūnanga still blazing,” he says.

“Let’s give our whānau and rūnanga the ability to create their own wealth, and to determine what to do with it. How fantastic would it be if we could realise that vision within all our communities of Te Waipounamu?”