You may be familiar with the mixed media sculptures of Ross Hemera that reference the ancient rock art found in Te Waipounamu. Or the large public works such as the Whakamarama sculpture at the entrance to the Māori section of the Museum of New Zealand/Te Papa Tongarewa or the enormous glass mural he created for the Christchurch City Council. 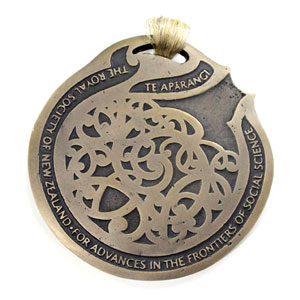 A recent design is much more a pocket-sized taonga. The Mason Durie Medal will be awarded annually by the Royal Society of New Zealand for advances in the frontiers of social science. Cast in a shape that refers to a matau or fishhook to symbolise authority and leadership, the medal also features a layer of koru-based surface decoration which refers the importance of linking people, families and communities together.

The medal celebrates the achievements of Tā Mason Durie and his contributions to science and humanities through roles such as his time as a commissioner on the Royal Commission on Social Policy from 1986-88. He is currently Professor of Māori Research and Development, Deputy Vice Chancellor and Assistant Vice Chancellor (Māori and Pasifika) at Massey University. 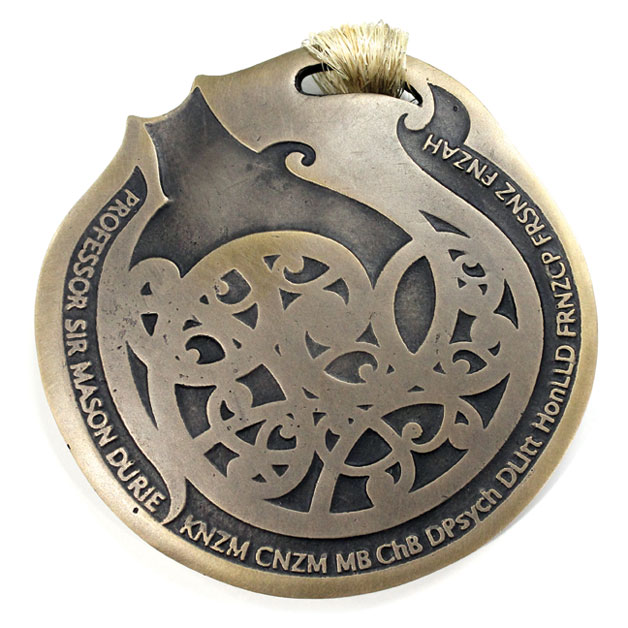 It’s not the first time Hemera (Ngāi Tahu, Ngāti Mamoe, Waitaha) has designed a medal. “I designed a couple of medals when I was working at Waiariki but don’t know where they’ve got to,” he says. But it is a field which brings its own distinctive challenges, not least, the relationship between design and the actual casting of the medal. In the past, the Royal Society used a British company to cast its medals. Hemera was determined to cast his design here in Aotearoa.

“When people talk to you about what they want, kind of briefing you as the designer, then the thing is how far do you go in interpreting that? I think I did close to a dozen iterations of how it might be done. Also, when I was looking at the process, I thought, ‘goodness me, we can do it here’.

“For an artist and designer, it is really important we do these things here in New Zealand. We do it a little bit differently, more hand crafted, less mechanical looking. And we give it distinction by the fact that we are as we are here in Aotearoa and we do things a little differently to the rest of the world.”

The result is a medal designed by Hemera, cast by Rotorua artist George Andrews and completely hand crafted here along with its mātai display case. – Nā Mark Revington.