When a tiny heart pulls a ton of love

Coming up to a year of motherhood, Chantal Tumahai has been on a rollercoaster ride of joy and heartbreak. Now the ride is slowing, and she is a mother to two healthy baby girls with strong personalities and resilience, Chantal looks back at just how many miracles have come their way.
She shares her story with kaituhi Shabnam Dastgheib. 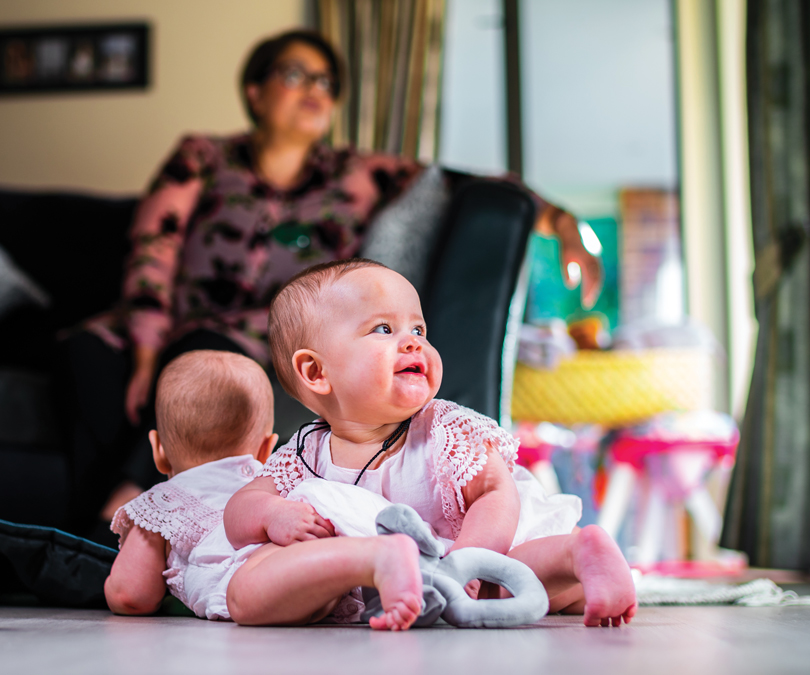 Above: Playtime for Raureka (left) and Waitaiki while taua Lisa watches on.

Three weeks after the premature birth of her māhanga kōtiro, Chantal Tumahai received an urgent late-night call which broke her heart and had her fearing the worst.

The condition of her smallest baby, Raureka, was deteriorating. What the doctors had been treating as an infection was likely to be much worse: a potentially fatal heart condition.

X-rays revealed her lungs were foggy and filled with blood; she wasn’t putting on weight like her sister and she wasn’t responding well to treatment.

Since the team of heart specialist and surgeons needed to diagnose and operate on such a severe case were based in Auckland, Raureka would need to be separated from her twin sister and transferred to Starship Hospital immediately.

The thought of open heart surgery on the tiniest of babies was terrifying for new māmā Chantal and her partner Josh Rauhihi-Foley. She felt crippling fear as she woke her parents to tell them the critical news.

They faced a tough choice: without surgery Raureka was unlikely to survive. Her heart condition meant her arteries were not draining properly and prognosis for untreated cases carries a high death rate.

But if they consented to the risky surgery they faced the potential of failure as well as a long recovery separated from their other baby girl, Waitaiki, who would be staying in Ōtautahi.

That night Chantal took her mother’s advice and went to the neonatal intensive care unit (NICU) to be with her babies. She sat with them through the night and considered her options. Just being with her girls helped her to heal and draw strength. 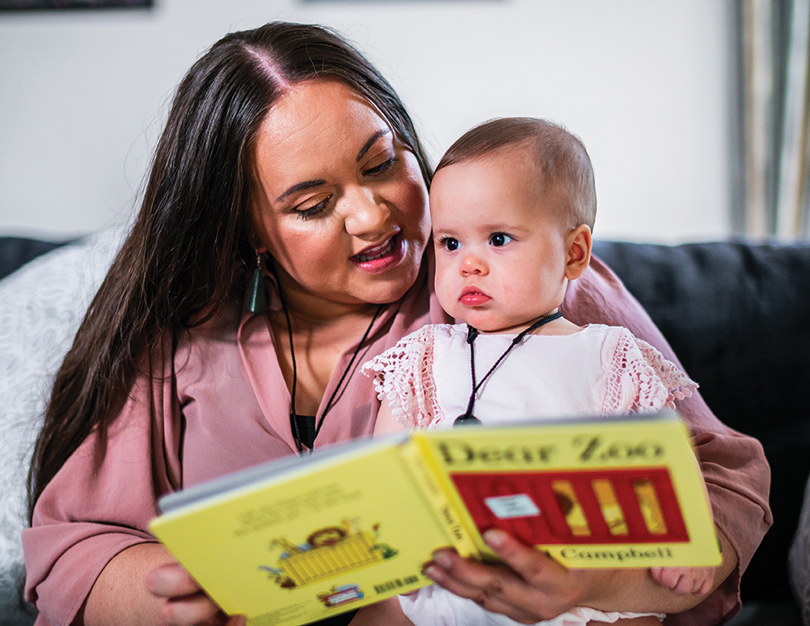 Above: Chantal and Waitaiki enjoying a pukapuka.

The name Raureka comes from a wahine toa from the Ngāti Wairangi hapū. An explorer and pioneer, it was Raureka who first made the dangerous crossing through the Southern Alps and made the remote treasures of Te Tai Poutini known to the Kāi Tahu iwi on the east coast. It is a strong explorer’s name, brave and powerful.

The family hoped little Raureka would be able to live up to it.

Under the weight of an impossible number of tubes and lines, Raureka’s thin legs peeked out of a tiny nappy as she lay sleeping. Chantal wondered how she could possibly survive open heart surgery, but they had to try.

“I was really overwhelmed, I didn’t understand what was really going on. I was heartbroken, I went to one-hundred and thought I was going to lose her.”

Chantal’s voice cracks and she tears up with raw emotion as she carefully recounts the moments she considered losing her baby.

For Chantal, whānau support meant everything for getting through that turbulent time.

Her parents, Te Rūnanga o Ngāi Tahu Kaiwhakahaere Lisa Tumahai and Te Rūnanga o Ngāti Waewae Chair Francois Tumahai, dropped everything to provide her with the emotional help she needed as well as practical support in the loving care of Waitaiki while she was still in NICU and at home.

Her sister, an overseas-based theatre nurse who had scrubbed in for the same surgery in the past, gave Chantal the pragmatic advice she needed to be strong about going ahead with surgery.

“She said to me ‘if you don’t do this then she won’t make it’. Hearing that from your own whānau – it made me stronger and helped me to realise we were making the right choice,” Chantal says. 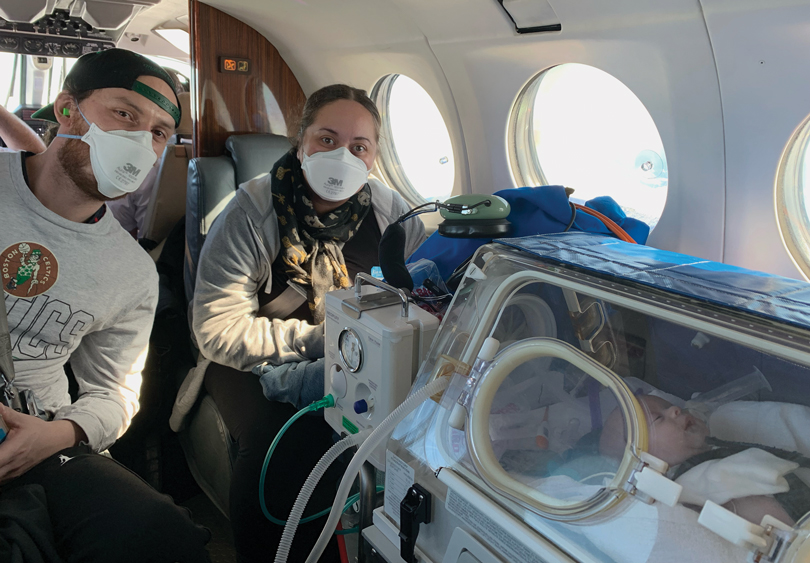 Above: Josh and Chantal on board the Starship air ambulance with their precious Raureka.

But the next day more hurdles appeared for the family. Raureka wasn’t stabilising enough to be flown up to Auckland and no-one knew if she could survive the transfer.

Francois says getting the baby safely to Auckland was the hardest time for everyone.

As pōua, there was nothing he could do but watch and hope for the best. He says the decision to drop a busy schedule of work commitments and focus on their daughter and mokopuna came with no hesitation.

“As soon as you have kids, you come second to everything they need. End of the day this was our daughter and you do what you can. We wrapped our whānau around them as much as we could and focused on the wee one we had in our care.”

That afternoon, after hours of failing to stabilise, a team of Auckland doctors flew down to Christchurch Hospital and got the job done. Chantal flew up with her baby in the Starship air ambulance, and said goodbye to her whānau while partner Josh went up on a commercial flight.

Josh says that afternoon was the worst of his life as he waited to hear if his baby daughter was OK.

“Everything was taking ages and I was so worried I was losing her. When I left Christchurch to go up, she pretty much looked dead on the table. It was a really bad last image of her.”

COVID-19 restrictions in September were tight in Auckland and further complicated the transfer. It also meant Lisa wasn’t able to give her daughter the goodbye hug she wanted. 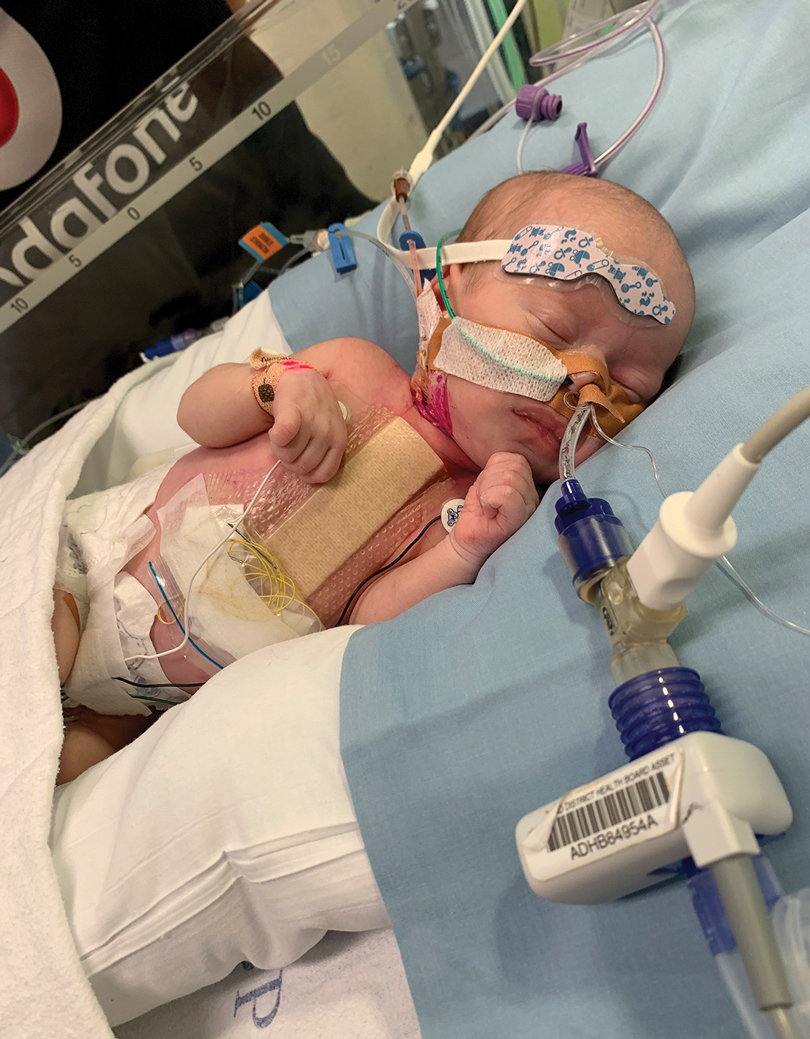 Above: Raureka at Starship two days after surgery.

Looking back on that week Lisa says one of the hardest moments was watching Chantal leave for her flight to Auckland and not knowing if they would see little Raureka again.

“That’s a memory that has stuck in my mind. Not being able to go to her. All those decisions they had to make on their own; it was heartbreaking to have to watch.”

But, like Francois, the decision to pause her Kaiwhakahaere commitments in order to give her whānau the love and care they needed, came naturally.

“You just have to drop everything. The work does go on and we have such an amazing team in the Deputy Kaiwhakahaere Matapura Ellison and the Kaihautū Arihia Bennett that I knew things were in good hands.

“People who know me know I have been wanting mokopuna for such a long time. So when it finally happened I was overjoyed. We had so much hope and excitement for our whānau.

“Every grandparent, every tāua and pōua is the same, you do everything you can because this is one of the most amazing things that has ever happened to you,” Lisa says.

Taking over the care of little Waitaiki helped shift the focus to more positive things for Lisa and Francois. 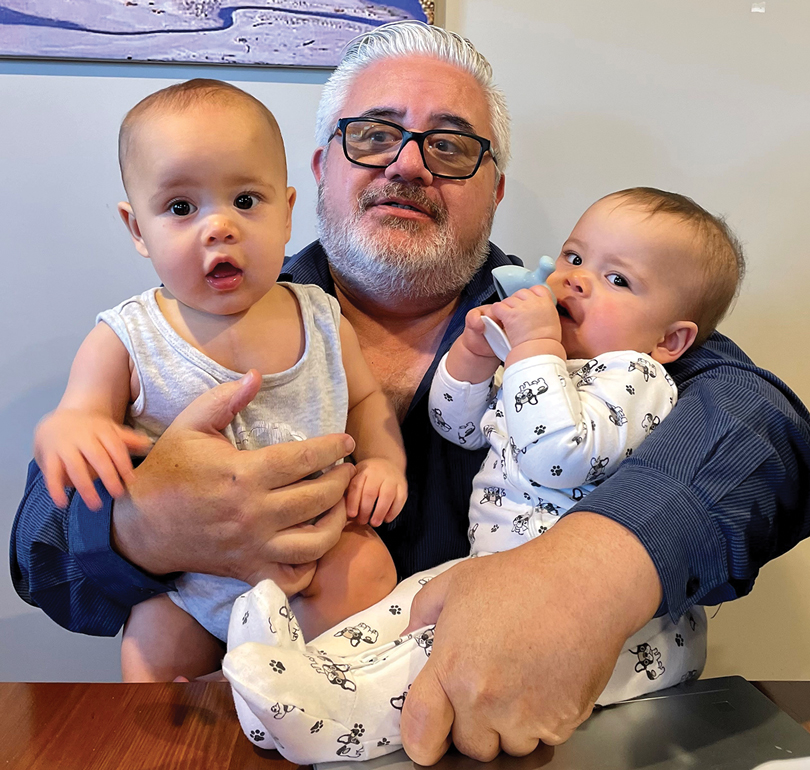 Above: Proud pōua Francois with his mokopuna.

Lisa says learning how to wrap a baby again, how to put her in her bassinet, and how often to feed her were all things she had to re-learn.

“But we had our systems sorted and we absolutely loved it. It was actually quite exciting.”

Meanwhile, in Auckland Chantal says she felt a wave of relief when they finally got to Starship and had the country’s top cardiac specialist and surgeon looking after Raureka.

Doctors diagnosed her heart condition right away; Raureka had total anomalous pulmonary venous drainage (TAPVD). Children with this heart condition need surgery shortly after birth as they often have trouble breathing and have a heart murmur. The vessels that were supposed to bring oxygen-rich blood back to Raureka’s heart from her lungs were incorrectly draining.

Surgeons told Josh and Chantal that without surgery the outlook was bleak. Despite her tiny frame weighing less than two kilograms, the decision to operate was made quickly.

“The doctors talked us through everything late at night; there would be a 72-hour danger zone in which we might lose her. This was the hardest time to wait and hope. If it wasn’t for the Starship Air Ambulance and the team at PICU (pediatric intensive care unit) there – I don’t know where we would be,” Chantal says. 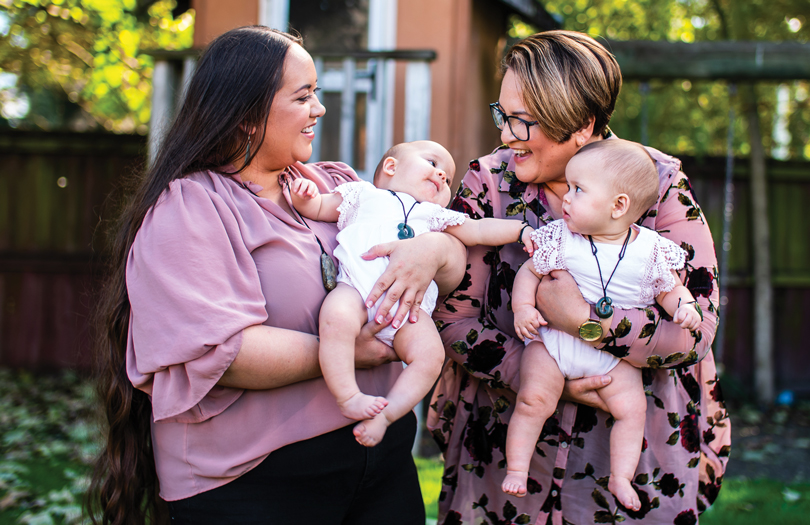 Above: Lisa and Chantal enjoy quality whānau time with the girls.

Luckily, it was from this point on that Raureka’s strong spirit and determination began to shine through. The surgery was a success. Recovery was meant to take eight weeks, but Raureka was healthy and ready to go home after just two.

Reuniting in Christchurch was everything for the whānau and the girls have gone from strength to strength since the surgery.

Chantal says being mother to such resilient babies has taught her perspective and brought an inner peace and calm to her life that she didn’t know she had. “I’m really kind of a hot-head normally but I’ve
learnt to slow down and live in the moment. We feel relief and joy. We are absolutely blessed.”

Josh says being a dad has been so much more than he could have imagined.

“They just bring so much joy to our lives. I love watching them learning things. I can’t believe we waited so long to have kids.”

As the babies have grown, so too have their personalities. They are loud, happy, strong and curious about the world around them. Raureka is a little ‘ratbag’ and both girls are incredibly content.

When Lisa had to take a step back from work a few months later for the passing of her father, Tahana (Danny) Tauwhare, she says it was a very special moment to be able to spend time with her pāpā and her mokopuna together.

“He held Raureka and even though he was slipping in and out of dementia in those weeks, he said to us that ‘they’re so beautiful’.” 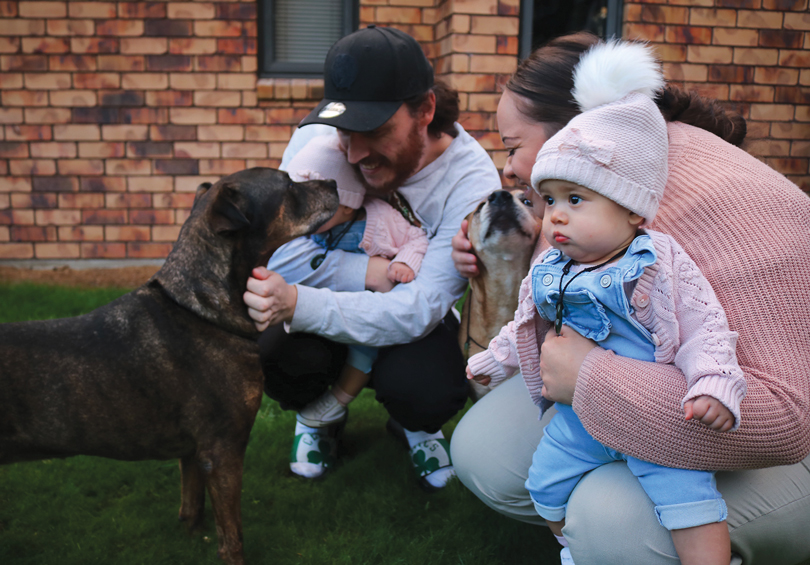 Above: Josh and Chantal with their girls and ngā kurī.

Lisa says the whānau feel incredibly blessed everything turned out as well as it has.

“It’s quite a miracle really, in any other set of circumstances she may not have survived. She is a miracle. Raureka is already taking her sister on and showing that incredible resilience she has.”

The girls will be celebrating their one-year birthday in August.

There may be a final surgery on the horizon for Raureka, but risks are much lower this time. Chantal and her whānau will take stock and show gratitude for their blessings over the past year.

Chantal says being mother to such resilient babies has taught her perspective and brought an inner peace and calm to her life that she didn’t know she had.

“I’m really kind of a hot-head normally but I’ve learnt to slow down and live in the moment. We feel relief and joy. We are absolutely blessed.”