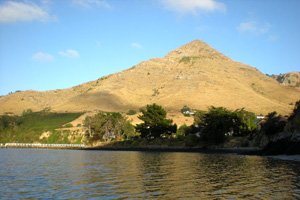 The small settlement of Rāpaki sits on the shores of Whakaraupō (Lyttelton Harbour) under the gaze of the mountain Te Poho o Tamatea (the breast of Tamatea).

For generations Ngāi Tahu have lived and died on this fertile land. The chief Te Rakiwhakaputa laid down his rāpaki (waist mat) and claimed the land for his people. Having secured Rāpaki as Ngāi Tahu territory he moved on to claim other lands and left his son Wheke to establish the settlement.

Today Rāpaki is home to Te Hapū o Ngāti Wheke, one of four Ngāi Tahu Papatipu Rūnanga (marae-based communities) situated on the Banks Peninsula. The families that live there are mostly Ngāi Tahu and they continue the tradition of upholding the mana of their hapū and keeping the home fires burning.

The rūnanga has recently built a new wharenui (meeting house) named Wheke which records the hapū and iwi history and traditions through ornate carvings and woven tukutuku panels. The marae is the heart of the Rāpaki community and the people and their stories remain the heart of the marae.