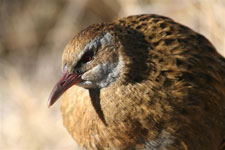 The culmination of many years of conservation work will take place at Stevensons Peninsula Lake Wānaka this week with the release of 15 Buff weka.

Eight years ago, a breeding population was established on Te Peka Karara, Stevensons Island, in Lake Wanaka with a view to building up numbers ahead of a release to the mainland.

Rewi Anglem, spokesperson for the four Otago Ngāi Tahu Papatipu Rūnanga leading the project, says Ngāi Tahu has been working for many years with the Department of Conservation Otago Conservancy to breed enough birds to attempt a mainland release.

“The other big challenge has been to find a suitable mainland site big enough and with low predator numbers to transfer the weka to,” says Rewi Anglem. “We have been fortunate in having the support of the leasee, Tim Burdon, to use Stevensons Peninsula, which has a semi-predator proof fence across its narrow neck. It is also of sufficient size to allow the weka to breed unhindered by space restrictions. Active and on-going predator control is occurring on the Peninsula to keep pest numbers low.”

The buff weka that are being returned to the mainland this week are the descendants of the last 12 Buff weka that were taken to the Chatham Islands in 1905.

Buff weka were once abundant in the drier inland regions of the eastern South Island but by the early 1900s they were driven to the brink of extinction by rabbit poisoning, introduced predators, and loss of habitat.

Anglem says the ultimate aim is to establish a successful population of Buff weka that can be transferred to many more habitats in the east coast of the South Island, providing an opportunity for Ngāi Tahu to restore this taoka tuku iho (treasured asset of the past).

Funding for the long-running programme has come both from Ngāi Tahu and DOC. Otago University Zoology Department has also recently become involved and is helping with research to better understand success factors for weka transfers. To this end, six of the 15 birds have transmitters attached, and on-going monitoring will take place.

Anglem says a key concern for the project team is the behaviour of visitors to the Peninsula. “It is very important that recreational anglers, boaties and other users of the Peninsula keep in mind that this programme is at a critical stage. We do not want fires or dogs in the area or any other activity that may cause distress to the birds. I know the locals will be careful, and I hope we can get this information to potential visitors to ensure that the no fires/no dogs’ rules are strictly adhered to”. 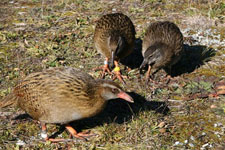 They were once abundant on the inland plains of the South Island east of the main divide. It is one of four closely related sub-species of weka found in New Zealand. The others are the North Island, western and Stewart Island weka.

Buff weka are similar to western weka, which are generally found on the west of the main divide between Nelson/Marlborough and Fiordland. Both species have red-brown legs and feet, but the Buff weka has a lighter (buff) plumage.

The mainland populations of the four sub-species are largely unknown, so weka numbers today are regarded as either precarious or vulnerable. While some sub-species are threatened, in other cases the bird has become a pest to other threatened wildlife, particularly on offshore islands.

To Ngāi Tahu Whānui, the weka is regarded as a taonga tuku iho, a treasure handed down from the ancestors. Prior to European settlement, this bird was a major source of mahinga kai (food) in the south. The feathers were highly valued for mahinga kakahu (clothing), such as cloaks, and their oil was used to make paints and to preserve food.

Seasonal weka drives were an important social and cultural event in bringing together whanau, but these annual food-gathering expeditions into the inland plains of Te Waipounamu ceased about 1870.

Hunters and dogs harvested birds in large numbers in autumn and winter, when they were fat and in prime condition to preserve in rimurapa (kelp) bags for consumption during the colder winter months when food was scarce.

Early European settlers, who also regarded the birds as a valuable source of food, knew weka as “bush hens”.