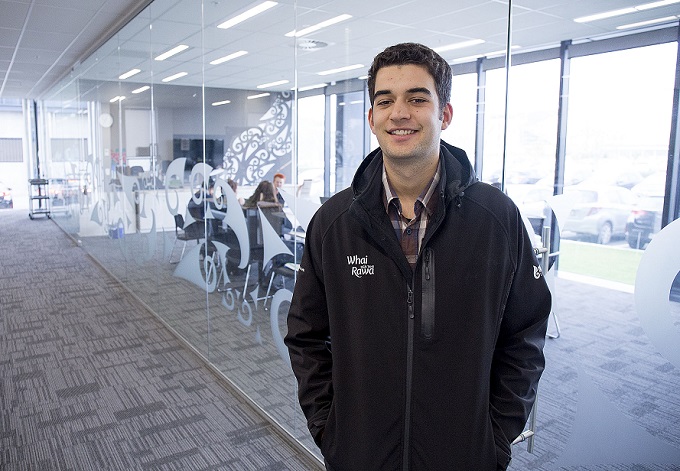 Sean Bragg is over half way through his two-year internship with Te Rūnanga o Ngāi Tahu and has already contributed to many important kaupapa across the iwi.

He relishes the opportunities and recognises the unique position he is in.

Sean grew up in Bluff and acknowledges he will always keep that connection strong.

“I was always involved with things happening at our marae. When I was younger a new meeting house was built in Bluff and it was cool to be part of that space and see it all happen. Bluff will always be home, I take it with me wherever I go.”

Sean recalls finishing high school without having any concrete decisions about his future.

“A summer role came up to host the manuhiri at Dart River Safaris in Glenorchy and I saw it as an opportunity to get a foot in the door.”

In 2014, the royal couple, The Duke and Duchess of Cambridge visited New Zealand and included a trip to Shotover Jet in their itinerary, Sean was selected to join the trip as a local rangatahi from Southland,

“I got the opportunity to meet the royal couple – I felt really privileged to be selected and that really sparked the desire to work for Ngāi Tahu. I wanted to give something back for the opportunities I was receiving.”

His Internship placement started with the Whai Rawa team in June 2015. He then moved into the GIS Mapping team, where he contributed to work on the cultural mapping of Southland and Bluff, learning about the cultural history behind place names of his childhood.

During his time with TahuFM. he was involved with planning and worked with the developers of TahuFM’s new app that allows listeners to stream the station live from anywhere in the world.

More recently, he took his first trip to Rotorua with the Ngāi Tahu Tourism team to attend TRENZ (New Zealand’s biggest annual international tourism event), where he helped with the virtual reality equipment.

“The virtual reality gear was really popular and it let us provide an experience and showcase what we’re all about,” he says.

Sean has also travelled around the South Island with the Te Pūtahitanga team, another experience he considers a highlight.

“I like to get involved in the work. These are experiences and opportunities that money can’t buy.”

The paid work and travel are definitely an attractive part of the internship but Sean considers the networking opportunities to be the most important.

“Working with different teams, getting that exposure and forming positive relationships are the best part of the internship. It was hard for me coming all the way to Christchurch from Bluff, and it is hard for other rangatahi who live in rural locations to feel connected to the iwi; but I’d advise others to  find someone to learn from and to have conversations with whānau about making the most of the many opportunities offered by Ngāi Tahu – there are so many.”

Sean has just started his placement with the Mātauranga team, helping to put the pēpi packs together, and he’s excited about some exciting projects coming up in that space.

“Bluff will always be home but I would like to take what I’ve learned during this internship and contribute to a community hub at papatipu level. I want to pass knowledge on and utilise all the networks and relationships I’ve formed in my time here.”