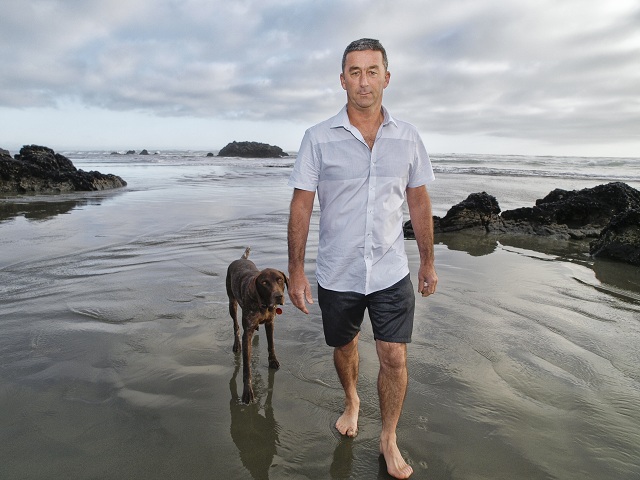 Greg Summerton left school at 16 to go fishing. Now he is founder and owner of New Zealand’s largest privately-owned long line fishing company and sits on the board of Ngāi Tahu Seafoods. Kaituhi Mark Revington reports.

Greg Summerton’s favourite fish is bluenose. It has medium, thick-flaked, white flesh when cooked, according to the guide produced by Greg’s company, Okains Bay Longline Fishing Company. It can be baked, barbecued, marinated, microwaved, poached, and used for soup or chowder, fry or sushi, says the guide. “Simple preparation is best,” says Greg, in the OKB office at Ferrymead. The office seems to reflect the same philosophy. It is plain and simple, with a great view out over the estuary.

The office is the nerve centre of New Zealand’s largest privately-owned longline fishing company, just around the corner from Sumner Beach, where Greg lives. “I grew up there. I am the third generation schooled in Sumner,” he says. “My children went to primary school in Sumner.”

Greg Summerton left school at 16 to go fishing, continuing a tradition started by his ancestor John Fleurtey in 1840. Greg reckons he was good at two things at school: fishing and art. He’s made a career out of one, and the other came in handy in developing a growing niche in the US market. Now, at the age of 51, he is the founder and owner of two fishing companies: Okains Bay Seafood and Okains Bay Longline Fishing Company – New Zealand’s largest privately-owned long line fishing company. He also sits on the board of Ngāi Tahu Seafoods.

He made a couple of pivotal decisions along the way. After skippering a fishing boat for 25 odd years, he traded the helm of a vessel for that of his companies. As he says, once his family started growing, he chose to get off the boat and go to market. And 10 years ago, he decided to sell his fish rather than catch fish to sell to other companies. The idea was to maximize the value of the fish at the top of the ladder, not at the bottom, he says.

Greg’s boats are long liners, which bring fish ashore in much better condition than those landed by trawlers. Long lining is much more selective than trawling, and it has a low impact on the sea bed. His company currently sells most of the fish it catches wholesale as skinned boned fillets to Hong Kong, China, Malaysia, United States, Europe and Australia.

The product is frozen fish. “I had a dream a long time ago of retail boxes of frozen fish in supermarkets around the world,” says Greg as he whips out the boxes in which his fish are marketed . The packaging is eye-catching and was  developed by Greg — which is where his flair for art came in handy.

To research the market, he flew to Los Angeles. “The idea was to get on a plane, get to Los Angeles and walk down the aisles of every supermarket, buying all the fish products that looked like potential competitors. I took them back to my hotel room and made a hell of a mess pulling them apart to see how they were put together.”

The normal route to getting a product in a supermarket would be to go to a city like Los Angeles and pester the manager of a regional supermarket for a meeting. If you’re lucky, you then get passed on up the chain to a depot manager who is in charge of a bunch of regional supermarkets, and then maybe a buyer at head office.

Greg bypassed that route and somehow wangled a meeting with the chief buyer in Seattle. “We got the name of the man at the top and sent him all our info. He looked at it and we started a conversation through email and then said we would be in Seattle on such and such a date, and arranged a meeting.”

It could have gone horribly wrong. Greg sent a box of his products by truck from Los Angeles to Seattle. For some reason, they arrived partially defrosted, he says. “We’re there with a soggy box of fish. We put it on the table and (said), ’Look we’re really sorry. It thawed out a bit’. He just said, ‘Not to worry, it happens all the time.’”

It’s worth mentioning here that Greg has developed recyclable cardboard packing featuring water-based inks, instead of the traditional polystyrene boxes used by the fishing industry. It is in keeping with his focus on sustainability, which sees his fishing vessel run on a biodiesel mix made in New Zealand from recycled cooking oil and sustainably-grown canola.

As well as being integral to his values and beliefs, sustainability is also part of his company’s marketing story. “Unless you are sustainable, large supermarkets won’t stock your product a lot of the time,” he says.

Another innovation is a QR code on the side of each box of frozen fish. Customers can scan the code with a smartphone to trace the origin of their fish. It automatically takes them to a web page which details when and where the fish was caught.

It is this attention to detail which Greg says helped him land the deal. “At the top of the retail ladder, the difference is in story and brand. What better way than the Ngāi Tahu story and whakapapa? Those executives in Seattle love it.”

Bluenose is very white and sweet and suits the Asian flavours of this dish, but it is not always available. Hāpuku, kahawai or warehou would be an excellent substitute.

To cook the rice, add rice, salt and 4-5 times the volume of water to a large saucepan on high heat. Bring to the boil, stirring occasionally, then reduce heat and simmer for 15 minutes. Strain and leave to cool naturally.

Place a good-sized sauté pan on a medium heat and add sesame oil. When pan is sufficiently hot, place in bluenose fillets and cook for 2-3 minutes.

Reduce heat by a third, turn fillets over and add garlic, ginger, shallots and soy sauce. Cook for a further 2 minutes.

Season fillets with salt and pepper to taste.

To serve, place fillets on top of steamed jasmine rice. Drizzle over remaining pan juices and garnish with chopped parsley.