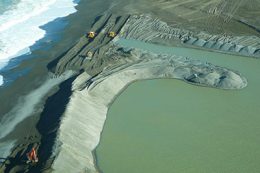 Earthworks preparing for the lake opening.

Te Rūnanga o Ngāi Tahu and Environment Canterbury were recently granted a suite of new resource consents for the management of lake openings/levels and some small scale earthworks to aid fish migration.  Thought to be among the first of their kind in New Zealand to be held jointly by a regional council and a local iwi for such a significant freshwater body, the consents are a huge gain for Te Waihora/Lake Ellesmere.

The applications for resource consent followed a decision in 2011 to amend the National Water Conservation Order (WCO) to protect a broader range of outstanding values. The new resource consents embrace the amended WCO. When considering whether to open the Lake to the sea a range of values are considered and eight key stakeholder groups are consulted. The aim is to reach consensus and make the decision together. Where agreement cannot be reached however, the final decision is made jointly by Te Rūnanga o Ngāi Tahu and Environment Canterbury (James Caygill and Wayne Holton-Jeffreys on behalf of each organisation),, as joint consent holders.

James Caygill, General Manager of Tribal Interests for Te Rūnanga o Ngāi Tahu and the Ngāi Tahu decision maker around the joint consent says the new collaborative consent process will work very well and he views it as a huge step forward for the lake, for Environment Canterbury and for Ngāi Tahu.

“We have a shared vision for the lake and with that as a starting point, the collaborative process will take care of itself,” he says.

Te Waihora has long been artificially opened to the sea. The Taumutu Rūnanga are known to have done so historically and records of openings by European settlers go back as far as 1852. Over the last 150 years, past schemes and proposals for how to open the lake have largely been based on economic values attached to land use, particularly agriculture, with little consideration for the ecosystem function of the lake and its status as an important mahinga kai for the Ngāi Tahu iwi. 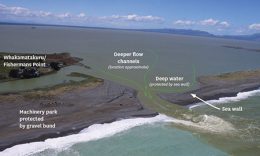 A diagram illustrating the opening process

The new resource consent gives far greater flexibility in deciding when the lake should be opened. Now it allows for opening Te Waihora to the sea once the minimum water levels in the WCO have been exceeded; and for the opening of the lake ‘at any level’ between April 1 to June 15 and September 15 to October 15, to allow for fish migration in and out of the lake. It makes provision for the mechanical closing of the lake; and earthworks to create kōumu drains to facilitate the customary catch of tuna (eel) and to shorten their migration distances over Kaitorete Spit. It also allows for investigative work for Whakaora Te Waihora in regard to moving the opening site, structures to control levels and the locating and deepening of in-lake channels.

Lake openings have an overall beneficial effect on the outstanding habitat values of the lake for a number of reasons. It allows poor quality, discoloured water to discharge into the sea; it allows saltwater in to help sustain the many saltwater marsh species that inhabit the lake environment; it helps provide nesting, roosting and feeding opportunities for a great range of wetland birds; and it allows many migratory and non-migratory fish species to enter and leave the lake.

“This is a brilliant step forward,” says Caygill.
“It allows us to manage the environment for the environment’s sake and gives expression to cultural and ecological values.”

If you would like to read more about current Canterbury University investigations into possible lake opening options, check out