Sitting across from Tahu Potiki in a busy Dunedin cafe, there’s no sign that only twelve months ago he was given three weeks to live. In November 2014 the father of three and Ōtākou Rūnaka representative was diagnosed with end-stage liver disease. Now, a year on from the liver transplant that saved his life, kaituhi Anna Brankin catches up with Tahu and his wife Megan as they reflect on this difficult time. 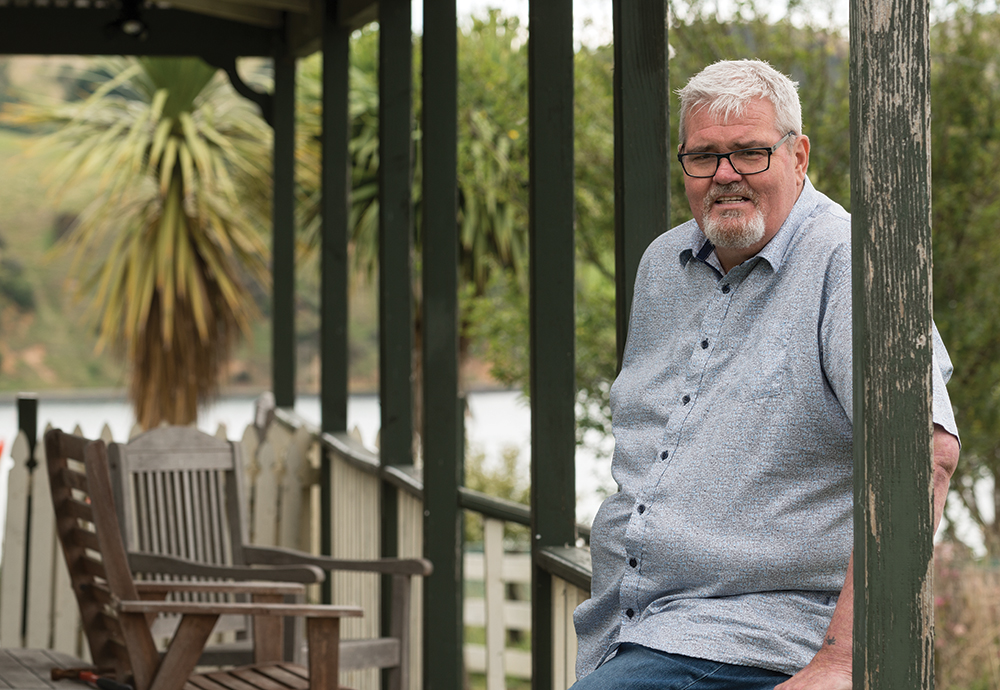 The next two years were gruelling, and in August 2016 Tahu was placed on the waiting list for a liver transplant. In December that year he was relocated to Auckland, so that he would be on hand as soon as the next one became available.

The next two months were a race against his deteriorating health, in the hopes that his body would hold out long enough to receive a transplant. It did, thanks to incredible health care, the unwavering support of family and friends, and less conventional interventions designed to care for all of the taha – tinana, hinengaro, whānau and wairua. This led to karakia Māori being performed just two weeks before a liver finally became available in February 2017.

When Tahu looks back on these long months, he is struck not by the challenges that he faced personally, but by the burden it placed on those around him. “I just had to sit about and be sick until I got better or died,” he says frankly. “Everyone else had to live with the added pressure, unknown future, and ongoing uncontrollable consequences.”

Naturally, it was Tahu’s immediate family who suffered the most – his wife Megan, and their three children Rīpeka (11), Timoti (10), and Tūkitaharaki (8). Fortunately, living in close proximity to Megan’s parents, Edward and Alison Ellison, meant that help was at hand.

“It was principally my wife Alison who provided the bulk of the support, looking after the kids, having them stay over, lugging them here and there,” says Edward. “It was a difficult time, and the clouds seemed to get heavier and darker. The impact it had on the grandchildren, that was our greatest concern.”

Perhaps unsurprisingly, the three children responded very differently to their father’s illness. As the eldest, Rīpeka coped by taking on more responsibility at home, cooking, and helping out with her younger brothers. “She has always been very mature,” Megan says. “She was acting more like an aunt than a sister, and it was a lot of stress on her. When we spoke about it just the other day, she remembers that she just felt confused.”

Timoti has always been a lot more emotional than his siblings, and this experience was no exception. Megan found it particularly difficult when he would seek reassurances she couldn’t provide. “I just had to be honest with him,” she says. “But he was angry, very angry. ‘Why is this happening to my dad?’ he’d say.

“And my baby Tūkitaharaki, he just attached himself to me,” she continues. “He was just far too young to get what the heck was going on.”

This confusion was understandable. As well as the obvious physical symptoms that the children could see (jaundice, swollen legs due to fluid build-up, weakness, and lack of energy), Tahu began suffering from episodes of hepatic encephalopathy. This condition is common among sufferers of end-stage liver failure, when the damaged liver fails to rid the body of toxins such as ammonia that affect brain function, leading to mood swings, personality changes, and erratic behaviour.

Tahu reels off a list of the odd things he’d done, including wearing plastic bags on his feet instead of shoes, and forgetting how to carry out basic household tasks.

“One night Megan and the kids came home at half past eight – it’s winter – and I’m just sitting on the couch in the dark, no heater, freezing cold, no television on,” Tahu recalls. “I remember it clear as day. I had both hands on the wall going, ‘There’s a light switch here, this is crazy.’”

They can laugh about it now, with Megan sharing a story about the habit Timoti developed of coming into the bedroom every morning and asking, “Are you f****d in the head today, Pāpā?”

But at the time it was distressing for the children, especially on the occasions when Tahu forgot who they were. And as for Megan, these episodes were an unwelcome reminder of how difficult it would be if the worst were to happen – if she were to be left to manage her own grief along with the devastation of their three young children. 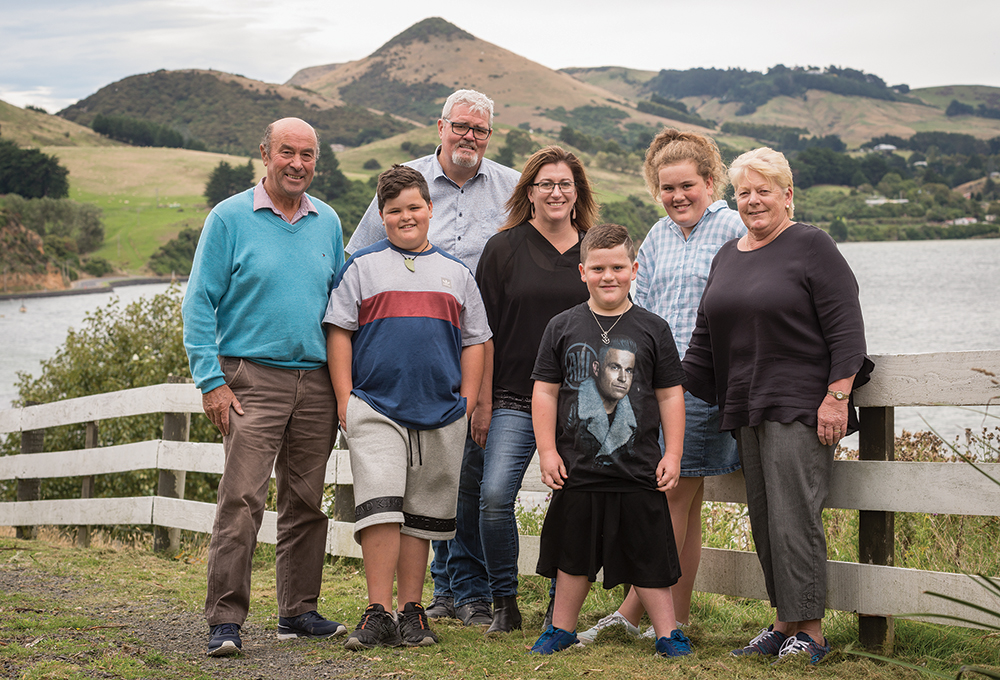 She found that the best way to cope was to focus on practical things: making sure the kids kept to their routine, as well as keeping up with her busy work schedule. According to Tahu, this determination to maintain her independence was a source of frustration to their close-knit circle of whānau and friends. “We had a whole community trying to get behind Megan, and they were getting pissed off that she wouldn’t accept it,” he laughs.

“I was trying to keep it all boxed in,” Megan says apologetically. “If they read this they’ll laugh, because that’s exactly how I am. I remember breaking down only once, sitting in the car park at work after we’d been told he had three months to live.”

When Tahu was shifted to Auckland in December 2016, Megan added regular trips up and down the country to the complex juggling act she had been managing for the last two years. She was determined to provide some stability at home for the children, while ensuring that they were able to spend time with their father.

As the whānau struggled to keep all the balls in the air, Tahu’s health continued to decline. “They took me off the waiting list three times because of infections,” he explains. “They were watching me deteriorate; my kidneys were shutting down. And once that happened, it was only a matter of time.”

“Even before I got sick [Megan] felt the kids suffered because of my work and the way that I was. I had to make some changes, which hasn’t been too much of a challenge really. I’ve just been away this weekend with Timoti. We were over on Stewart Island and part of that was a four-and-a-half hour walk up and down the bush tracks. I wouldn’t have been able to do that before I got sick; I wouldn’t have bothered even trying.”

It was at this point that Megan decided to accept an offer made by their good friend Scotty Morrison to perform a cleansing karakia. “I remember thinking, ‘Yep, I’ll take anything’,” says Megan. “It wasn’t even about saving his life; I just hoped it would bring him a bit of peace.”

“And I agreed for your peace of mind more than anything,” Tahu says to his wife. “My only concern was that they were going to take me into the bush and throw me in the f***king creek in my undies.”

Much to everyone’s relief, the karakia was able to be performed in the hospital itself, with a handful of family and friends present. The room was darkened, and Scotty stood at the foot of Tahu’s bed and performed a lengthy karakia, using a rākau to draw out any hara from his body.

“I went into it without expecting much, but I wasn’t so cynical that I expected nothing. But I didn’t expect what happened, which was that halfway through the karakia I started to feel physical pressure on my face,” Tahu says as he recounts this incredibly personal experience. “I shook my head; I wasn’t in any sort of trance. Then I felt it pulling on my legs. It went on for a minute or so, and then I started crying, not sobbing but tears just pouring out of my eyes.

“This is the strange thing, and I don’t want to take anything away from the incredible health care I got, but my blood tests started getting better. I didn’t feel any better, I still couldn’t walk, I had no appetite, my mouth was still bleeding, but I was in a very strong position to actually receive a liver.”

But his doctors were clear that unless a liver became available, he still had only weeks to live. As time wore on, Megan and Tahu planned his tangi together. “So I’ve got that on file,” Megan laughs, before saying seriously: “I needed some clarity. I was terrified by the thought that I was going to be left with three grieving children and a tangi to organise.” 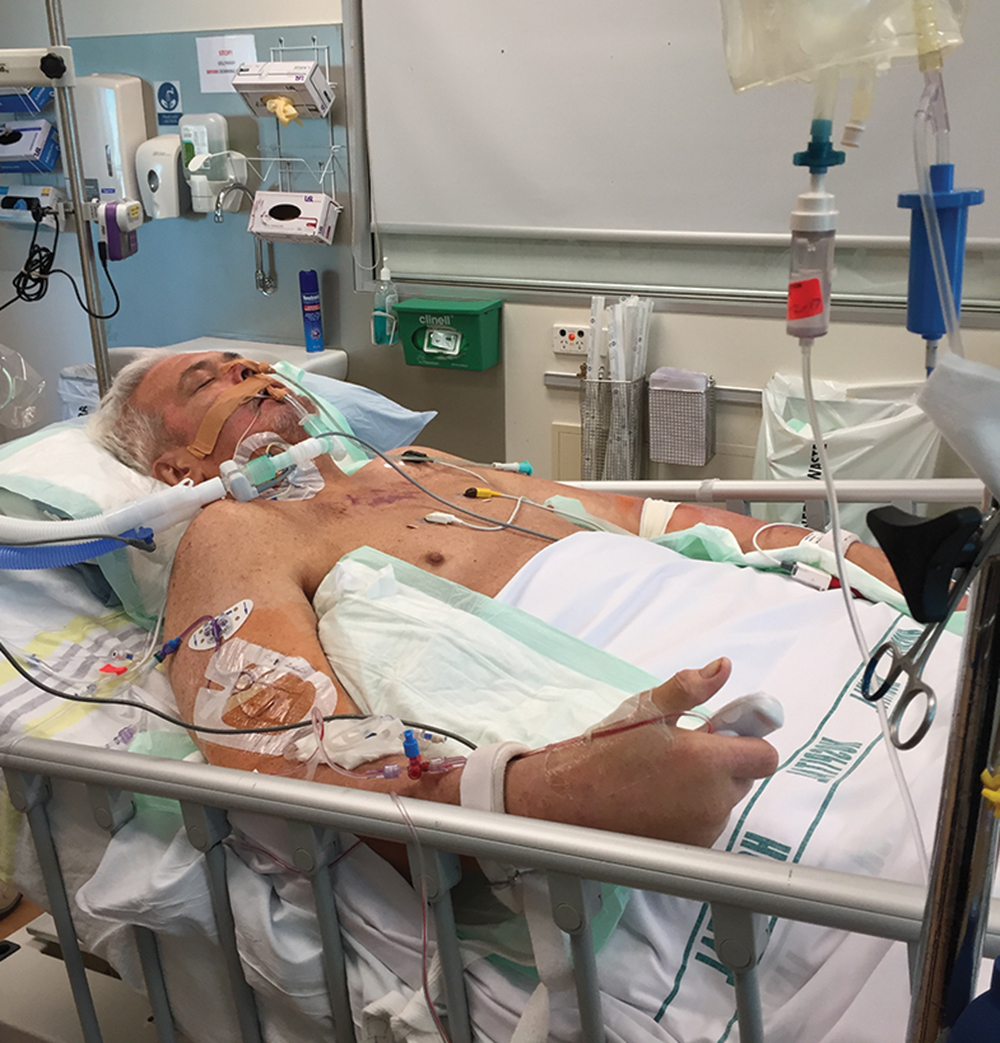 Thumbs up from Tahu immediately after his liver transplant.

By this point Tahu had accepted his fate. “I thought if ever I was going to be told I was terminally ill, I’d be shit scared,” he says contemplatively. “But I never panicked. The only thing that I was terrified about was leaving Megan and the kids. Other than that, I’d given my fate over to the universe. I honestly believe that’s how I’ve lived my whole f***king life.”

On 17 February 2017 this philosophy paid off when Tahu underwent transplant surgery, and to date his recovery has been remarkable. “I was eating within two hours and walking within twelve,” he says. “They told me I’d have periods of rejection, that I’d be opened up again because of infection, that I would have diabetes, that I could be on dialysis. I’ve had nothing.”

The positive effects of Tahu’s recovery were shared amongst his whānau, just as the burden of his illness had been. “It was quite remarkable when Tahu got his transplant and it took immediately,” Edward recalls. “The children just seemed to blossom, which of course naturally they would; but it really showed us how much they had been bearing that weight.”

While the kids adjusted quickly to the news that Tahu was going to survive, Megan found the prospect of his return home more complicated.

“Jeepers, I didn’t think I was going to be able to live with him again,” she says honestly. “For two years I had been through waves of emotion; sadness, loss, anger, frustration. And I was angry because part of me felt he had brought it on himself.”

“To be honest, Megan made some ultimatums,” Tahu says. “Even before I got sick she felt the kids suffered because of my work and the way that I was. I had to make some changes, which hasn’t been too much of a challenge really.

“I’ve just been away this weekend with Timoti,” he continues. “We were over on Stewart Island and part of that was a four-and-a-half hour walk up and down the bush tracks. I wouldn’t have been able to do that before I got sick; I wouldn’t have bothered even trying.”

“We’ve learned a huge amount, and I think we all appreciate the fragility of life,” Megan reflects. “It sounds odd to say it was a good experience, but it was an experience that took us right to the edge. And we’re just lucky, we’re so lucky that I’m not sitting here talking to you about his death. We’re very blessed to be sitting together.”