A stranger in a strange land: painful lessons about belonging

I am currently working towards my PhD. It’s about identity and belonging and I have been reading fascinating academic writing about this topic. I have been exploring Ngāi Tahu history and culture, and more specifically my Ngāi Tahu ancestors, and have met, via email or in person, a number of birth relatives.
I have also joined a small Ngāi Tahu group in the Australian state of Victoria, where we meet for te reo lessons and stories about culture. These days are easy – everyone is very welcoming. I now realise it’s because most of us are cut off from our roots, from our Ngāi Tahu community and the extensive and complex interconnected relationships that living in that community guarantees.

Recently I had the opportunity to experience a real-life lesson about belonging when I was invited to have a video art piece join an exhibition as part of the Ngāi Tahu Hui-ā-Iwi held in November in Tuahiwi – my old home town.

There’s a reason I’m exploring identity and belonging and that reason is the fact that I was adopted at birth. This fact has in many ways shaped my life. I grew up in a Pākehā family. My parents, two brothers and their families still live in Christchurch; and for more than 26 years I have lived in Melbourne. Now I have married an Australian, so I will probably die with the sea dividing my old life from my new. Still, as I have aged, I have wanted to find out more about my past; I have wanted to be connected to something old and important. Hence this PhD exploration of my Ngāi Tahu birth-kin.

My birth whānau are from the deep south of the South Island, a place that saw a tremendous amount of intermarriage with Pākehā whalers and sealers from the early 1800s. This extensive intermarriage has resulted in some people calling Ngāi Tahu the “white tribe”. Certainly, all the kin I have met – my birth-father Brian, his children, his cousins, all look a lot like me – white. So my expectations going into the hui were that it might be difficult, because I didn’t know anyone, but that there would be other artists and people like me, outsiders, and we would gather together like pieces of driftwood and make our way through the event together – I’m good at gathering people together. Instead, I discovered a rich community of artists and friends and families who are all bound strongly together through ties of kinship and blood, and I was the only piece of driftwood.

Trying to find some place to fit

Driving out on the Friday morning, I grew increasingly nervous. The whare toi (art room) was up the back of the primary school, opposite the marae, where a huge marquee was set up with hundreds of plastic chairs, waiting to be filled. I could see that we were really away from the main action. In the room, my video monitor was already set up and it just needed a couple of tweaks to be perfect. Soon artists began arriving and setting up their art. People were friendly. Ladies kissed me. Everyone was very smiley. There was even a familiar face, artist Nathan Pohio, who I had met on a previous trip to Christchurch. Each newcomer would be greeted with cries of greeting in te reo, and effusive kisses and hugs. Quite a few of the women had facial moko. I stand, then sit, trying to look casual, smiling away. I sat at the behest of Aunty Lisa who had the most beautiful smile, and who made small talk with me. I tried not to look at my watch. It has been a long time since I have felt so much an outsider. At last I was able to escape to the marae as the pōwhiri was beginning – a calling of people onto the marae, a welcoming. 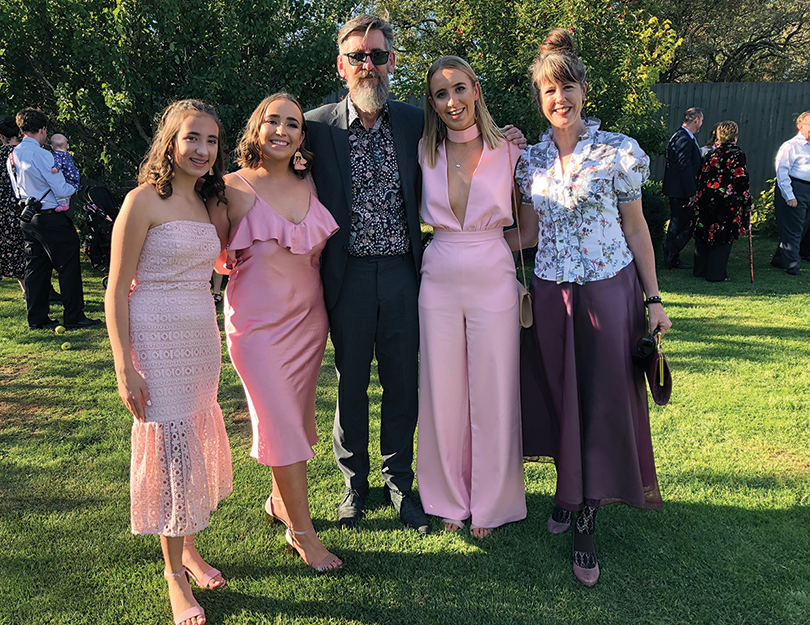 Above: Christine with husband Jonathan and stepdaughters Freya, Milly and Isabella.

Strangers who speak the same language

Priscilla, one of the artists, told me to find Aunty Lisa, so that I could go in with them, in with the strangers who must wait to be called onto the marae. However, when I came close to the marquee someone, organising people, gestured to the marquee and said, “Ngāi Tahu in here”, and I thought, “Well, I’m Ngāi Tahu, I guess I go in here.” So I sat as everyone slowly made their way in, filling up all the rows, facing the empty seats of the other strangers who would shortly be coming in. Many of the older women were dressed in colourful clothes and hats, their faces shining with excitement. I realised what an event this was, how much it meant. In here, I was anonymous. I could relax. I didn’t understand the words but the beautiful language washed over me. Every now and again people would laugh, reminding me of what I was missing. The strangers opposite weren’t really strangers, not like me, because many of them too would laugh. Their common language bonds them.

Someone told me they had enjoyed my energy in the room. I hugged Tui and thanked her for making me so welcome, and she said to me, “You are whānau now.”

It was a shock to see my nephews and my brother’s separated wife and her mother outside the tent – I did not even think about bad blood but gratefully hugged them both. But they didn’t stay long, they were guests and could return to their lives. I was Ngāi Tahu. This was the place where I “belonged”. At the announcement of the hāngī the queue quickly formed, faces bright with anticipation and I realised that I just couldn’t eat alone, so I went back to the art-room and waited with empty stomach until I thought it was time I could leave. No one was looking at my video art. It was dispiriting. I woke early the next morning, while it was still dark, dreading the day ahead.

Tui takes me under her wing 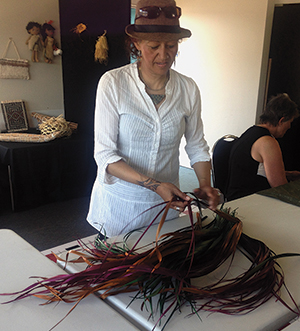 Above: Tui Falwasser demonstrates how to make flowers from harakeke.

On Saturday, I had booked a bus trip into town to see the art that Ngāi Tahu artists have been making and incorporating into the build of the city. We had packed lunches to eat on the bus. In movement, there was respite. Tui was our host, this is her work, she is the conduit between the artists and the city planners and builders. Funny and warm, she knew everyone, but she looked out for me. Perhaps she saw my aloneness. Back in the art-room I joined some small girls as Tui taught us how to make roses, rosie-posies, out of dyed flax. I enjoyed having the girls either side of me, all of us learning, something to do and nothing to prove.

My sister-in-law Julie had texted me earlier, asking if I wanted to come for dinner. At first I thought perhaps I should stay out at the marae for the evening, go to the concert, keep trying to fit in, but as the afternoon wore on I realised I was just so looking forward to leaving, to seeing some familiar faces, so I made my excuses. It was so nice to spend some time with my brother Paul and Julie, for everything to be shorthand, to be at ease. Then, at home, my parents Mary and Peter had returned from their trip and their familiar faces were
so welcome.

Looking for the thing I already have

Above: A view of the art room looking towards the screen featuring Christine’s work.

On the final morning, I asked one of the women to explain what she was making, as she stripped the green outer covering of flax leaves with the edge of a mussel shell, exposing pale ropes of fibre underneath. She taught me how to make a woven lily using flax. As I was weaving, I turned to see my parents and Julie coming up the path to see my work. It was so lovely to see them, even though I could feel their awkwardness in the room as they felt that unusual thing for Pākehā to feel – to be in the minority.

Then, finally, the packing up. The monitor and stand was taken away, the art down from the walls, the floors vacuumed. Farewells were said. Unexpectedly, someone told me they had enjoyed my energy in the room. I hugged Tui and thanked her for making me so welcome, and she said to me, “You are whānau now.” I was touched. Perhaps I had succeeded in some small way towards some kind of acceptance by this community. But it may all come to nothing, as they continue in the stream of their whānau, their loved ones, bound together by time, and I move out of it again, back into my own, complicated, stream; driftwood drifting away again.

The answer to this question of belonging is perhaps deceptively simple after all. It lies in the hundreds of hours spent together with family and friends, in the small moments as well as the big celebrations, in the sweet faces of those I love. Where is this belonging, then? It’s right here.

Christine Rogers (Ngāi Tahu) is a Melbourne-based writer and filmmaker. Her recent work includes the feature film I am Evangeline (screened at the MUFF, STUFF, and FICSUR film festivals). Christine has mulitiple screen credits in short drama, educational film, and digital stories that have screened at Australian and international festivals. Her writing has been published in The Herald Sun and a number of popular blogs. Christine also creates web content for Briarbird.com. She is currently undertaking a PhD at RMIT University, exploring her Ngāi Tahu ancestry through video art and embroidery. She is the recipient of a Vice Chancellor’s Scholarship.