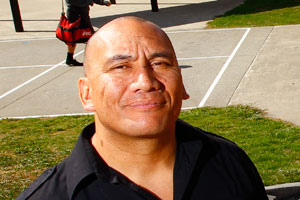 For Watson Ohia, kapa haka is not just about what you see on stage, it’s a way of life; it’s something that we as Maori do far beyond the stage, when we honour, when we celebrate, when we grieve, when we have something important to say. We can say it our way.

Watson (Te Atiawa, Ngāti Rarua, Ngaiterangi, Ngāti Pukenga, Te Arawa), is one of the judges at Te Matatini 2015 – he’s calling it a major highlight in his calendar – and he’s eagerly anticipating the creativity and talent that will come together in Christchurch on March 4-8.

“I’m looking forward to seeing what the groups will bring to the competition,” he says.
“What we’ll see from the teams will be the culmination of many months of hard work and that’s going to be a highlight for many people.”

Watson has been involved in kapa haka all his life. His parents were very active in the community including kapa haka and Ratana Church circles and in his early years, growing up in Marlborough, he and his family were immersed in the kapa haka scene. He still remembers photos of himself performing kapa haka at just five.

“My parents tutored kapa haka, so we were involved as a family all through my childhood. Then, as a teenager, I went to Aranui High School in Christchurch (1983-84), and I was involved in a lot of Māori cultural activities,” he says.

He says his early experience in kapa haka prepared him well for life, giving him the maturity and confidence that comes with a well-defined sense of self.

“Kapa haka went a long way toward helping me feel good about who I am as a Māori. It makes me feel proud of who I am, and hungry to learn more. As young teens we had a lot of outstanding role models in kapa haka and that instilled in me a drive to keep learning.”

“It’s important for performers and judges to know their craft, they’re knowledgeable, confident, and that the key messages in the performances are communicated clearly and effectively. But I’ll be looking for the whole package – group performances that stand out for their well-honed skills and presentation, and the way they express their message on stage.”

For Watson, Te Matatini 2015 will be a celebration of hard work, of whānau and community, of traditional and contemporary Maori cultural expression, and most of all, a celebration of being Māori.