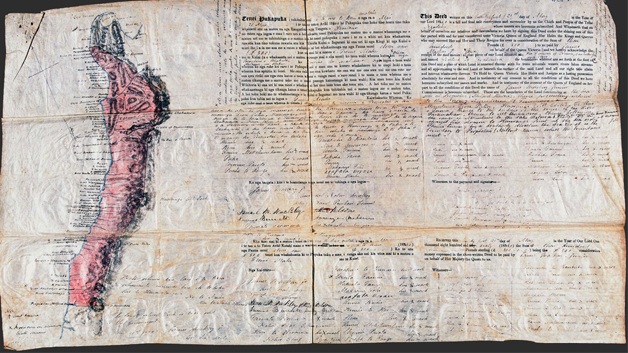 Assistant Native Secretary and Assistant Land Purchase Commissioner James Mackay Junior first visited Te Tai Poutini in 1857 from Collingwood. He was greeted courteously at Māwhera (Greymouth) by Werita Tainui’s older brother Tarapuhi, who was said to be a very well made, muscular man over six feet in height.

Mackay told Tarapuhi that his land had been sold to the Government by Ngāti Toa under the 1853 Waipounamu Purchase, at which point Tarapuhi produced a letter addressed to Donald McLean (Chief Land Purchase Commissioner) from the Poutini chiefs. It asserted Poutini ownership of the land in question and declared Ngāti Toa to be “thieves, as their feet have never trodden this ground.”

The letter stated that the chiefs did not want Europeans coming to live on their land without payment, but that they were prepared to sell their whole territory to the Government – from Piopiotahi (Milford Sound) in the south by way of the Main Divide to Lake Rotoroa, and thence to the coast at Kahurangi, south of Whanganui Inlet – in return for £2,500 and a suitable share of land for themselves.

Mackay returned to Nelson with the chiefs’ letter as well as coal samples, and reported that the West Coast was “suitable for grazing.”

In November 1858, he received instruction from Donald McLean to carry out the Kaikōura and Arahura Purchases immediately. To that end, Mackay wrote to Tarapuhi telling him that he wished to negotiate the purchase of Māwhera, Kawatiri, Mokihinui, Karamea, Hokitika, Okau and Piopiotahi. He asked Tarapuhi to arrange a gathering of all customary owners at Māwhera.

Mackay was given full discretion (by McLean) to negotiate the sale as he saw fit. After completing the Kaikōura Purchase in 1859, he travelled to Māwhera, stopping in Christchurch to collect the 200 pounds that McLean had authorised as payment for the Poutini Coast.

Upon arrival at Māwhera, Mackay discovered that the negotiation was not as easy as he had expected. He failed to persuade the gathered chiefs to accept McLean’s terms, and the government offer of £200 with 500 acres of reserves was scornfully rejected.

After four weeks of wrangling with no further progress, Mackay left the coast to get further instruction. In Auckland he was authorised to offer £400 and up to 12,000 acres in reserves.

Subsequently on 21 May, 1860, after a further two months of negotiations, Mackay at last got the Arahura Deed signed by the leading Poutini chiefs at Māwhera. They surrendered their customary title to nearly 3 million hectares in return for £300 and 10,224 acres (4,138 hectares) in reserves. Of that, 3,500 acres were reserved as an endowment “for religious, social and moral purposes” while the other 6,724 acres were for the use of Poutini Ngāi Tahu.

The Māwhera landing place reserve of 500 acres was insisted upon by Tarapuhi and would prove to be the most valuable of these. It provided the site for Greymouth town and from 1865, the leasing of sections provided Māori owners with regular revenue (at low rentals administered by the Government).

The chief importance of this deed to Ngāi Tahu was that it recognised their claim to large areas that had previously been credited to Ngāti Toa under the Waipounamu Purchase of 1853.