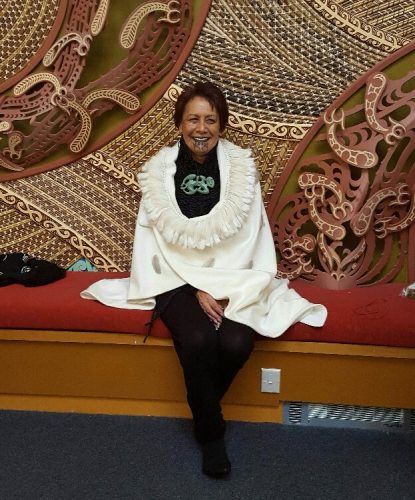 The award, which aims to celebrate leadership and outstanding contributions to Māori art, was an unexpected honour for Hana, who says she was nominated by fellow Ngāi Tahu members, Suzanne Ellison of Kāti Huirapa Rūnaka and Gail Thompson of Awarua.

“The award was recognition of my mahi throughout my lifetime, in terms of weaving and also my involvement in Te Ao Māori.

“I felt honoured to be in such esteemed company, because those people (other recipients) in my category were a lot older than me.”

The award was also an acknowledgement for her involvement and contributions in community projects such as the decorating of the Kaikōura Takahanga Marae wharenui, Maru Kaitatea, which was officially opened in 1992 and the development of Te Rau Aroha Marae in Bluff over a 30 year period.

Among the other recipients of awards were two of Hana’s relations. Her mother-in-law’s sister, Matekino Lawless and her Uncle Te Whetu Takitahi Te Ariki Derek Morehu.

Born in Bluff, she is the youngest of eight children. Her father was Ngāi Tahu and her mother was from Whakarewarewa and of Te Arawa descent. The family lived together in Bluff, but when her mum passed away at age of 42, they travelled back north for her tangi.

After the tangi, Hana says she and one of her sisters remained in Whakarewarewa where they were raised by their aunty. Hana was only 15-months-old at the time. She returned to Bluff when she was 18.

“Growing up in Whakarewarewa, all of the mums and kuia did one type of weaving or another. My mum was a piupiu maker. There were others who were masters in tāniko (weaving) and korowai. Others made kete whakairo (flax bags) and whāriki (woven floor mats) for the marae. It didn’t matter what house you went to, there was always some type of weaving going on – I was immersed in weaving and it was normal for me. Also, I have been blessed with having the best teachers who shared their knowledge and skills with me so willingly.

“I started with tāniko, then I did some whatu muka (finger weaving) before I moved on to plain raranga, whāriki and kete whakairo. In the last 10-15 years I have focused more on making kete whakairo. I try to build up collections but just end up giving them away.”

Hana (left) and the tāniko she created at one of this year’s weaving wānanga at Te Rau Aroha Marae.

A fond weaving memory for Hana was when she was invited to accompany the San Francisco leg of the Te Māori Art Exhibition opening in 1985. She went along as a weaver and her sister, Maria Tini performed kapa haka.

“It was a huge event. We were honoured to travel with kaumātua, kaihaka, weavers and carvers from all over the country,” she says.

While weaving is undoubtedly a love for Hana, her priorities lie with whānau. Much of her energy has been focused on helping to develop opportunities for her people, Te Rau Aroha Marae and the wharenui, Tahu Pōtiki.

“One of the most important things for us is to help grow and teach all of our cultural practices like weaving, carving, mahinga kai, te reo and tikanga to future generations – those are the things that matter to me now.

“I grew up in a generation where we weren’t able to kōrero in te reo and unfortunately that’s always been a downer for me. But consequently, I was involved with the development of kura kaupapa Maori (in Invercargill), and in the last three years our moko, Thomas (Aerepo Morgan), has been achieving great things using his te reo,” she says.

Often various kaupapa are held at Te Rau Aroha Marae and this year, with funding from the Ngāi Tahu Fund, Awarua whānau were able to hold korowai weaving wānanga. The wānanga were led by Ngaruawahia-based weaving expert, Maata McManus.

Hana plans to weave a traditional korowai (cloak) for her whānau, and in the future she also hopes to create a single korowai for Awarua Rūnanga whānui to enjoy.