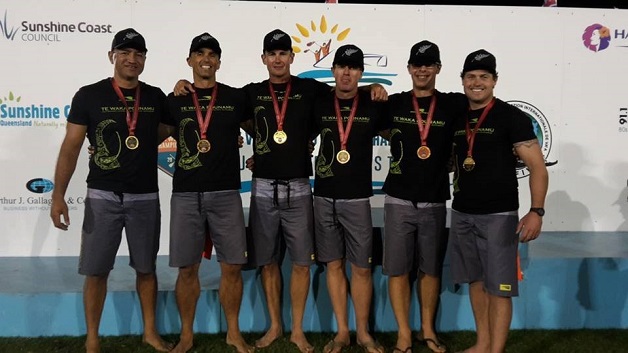 The medal dominance of Team Aotearoa at the Va’a World  Waka Ama Sprint Championships has been described as a ‘black wave’.

“People kept talking about a ‘black wave’ because Tahiti had never been beaten at the world champs like this before,” he says.

But when Aoraki Matatū, set off for the world champs they were rightfully hesitant of how they would go against the much favoured Tahitian teams.

Before they left for the world champs, Craig Pauling, said the Tahitians were the team to beat.

“Waka ama is the number one sport in Tahiti and they are normally the teams to beat,” says Craig.

“Adrian was the only paddler to beat Karyl Maoni, the Tahitian 8 time world V1 champion, twice within 24 hours. Karyl had not lost in eight previous world championships so for Adrian to do it twice, was awesome,” says Iaean.

Craig, Kiliona and Iaean at the world champs.

Reflecting on the world champs, Craig Pauling says the trip was a outstanding achievement and extremely satisfying.

“It was an amazing week and an absolutely outstanding ride for our team. We have come a long way over the last 15 plus years as a team and it is great to now be able to call ourselves world champions,” says Craig.

The success of Aoraki Matatū was not without it challenges though. In one of the races their turning flag broke off its mooring and floated away. The team also had to adapt to the steering and speed of the unfamiliar Hawaiian shaped waka.

Iaean attributes the team’s success to great preparation and the support they received from whanau, friends and sponsors.

“We went into the world champs with the best preparation we could. We were easily the fittest masters team there and we had borrowed a Hawaiian waka from Dunedin waka ama club Fire in Ice for a couple of months leading up to the championships so that we could get used to steering and paddling it. If it had not been for our preparation, support from family, friends and sponsors we would not have done as well,” he says.

“After the 500 they came up to us and asked if we would swap shirts with them. This was a real highlight for us because it showed great recognition from them,” says Craig.

“We will be back at the next world champs to defend our title in 2018,” says Iaean.

“We know next time will be tough because we will be taking on the Tahitians on their home waters. But why wouldn’t we take on the challenge and go to one of the homes of paddling, we think we are up for it!,” says Craig.