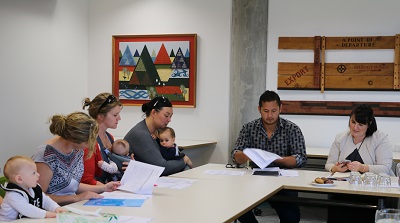 The new Te Whenua Hou Community Committee is working hard to create an environment where Ngāi Tahu Farming employees and their families feel more socially connected to each other and to their wider communities.

The group, which had its first meeting in March, aims to be the voice of the Te Whenua Hou community, and a number of mothers from the farms have joined forces with other community members to initiate a series of activities and events to grow camaraderie and connections.

Staff barbecues have already been held and according to Rā Dallas, the whānau community champion for Te Whenua Hou, those have been a great success.

“In addition to demonstrating manaakitanga and whanaungatanga, social events like that also encourage rangatiratanga and oranga – key Ngāi Tahu values that we want to encourage every farmer to be a part of,” he says.

A community of close to 150 people is now spread across seven operational dairy farms and eight grazing farms and that’s expected to grow. As in any new community, there are people living just 60 metres apart, who don’t even know each other.

“That’s why we thought it was important to form a community-centred community and in 2015 we surveyed the people at Te Whenua Hou to find out what they wanted, how they thought we could help them,” says Whenua Kura manager, Renata Hakiwai.

“For us, it’s vital that this be driven by the people within the Te Whenua Hou community and that we are there to help them make their community aspirations a reality.”

Renata, is chair of the committee and is working closely with Ngāi Tahu Farming People and Development manager, Claire Bourne with community and committee members to organise a range of new initiatives.

“First up is the Glits and Gumboots Ball, which will be held on 3 June at the West Eyreton Hall,” says Claire.
“Two mums in our community – Catherine Dawson and Nicola Risato – came up with the idea and they’ve done all the organisation for it. It’s been planned it as a celebratory event to mark the end of the dairy season and the achievements of the Te Whenua Hou community to date.”

June also sees the beginning of community health days at Te Whenua Hou, when a number of Oxford health providers will meet with farming families to discuss and offer a range of health checks. It is hoped that by engaging with Canterbury health providers in this way, Te Whenua Hou families will be able to establish a trusted network of specialist support. 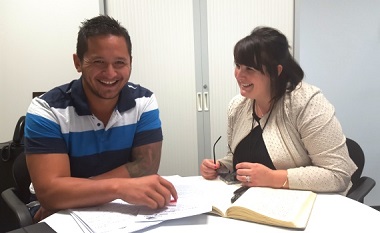 Staff kapa haka evenings have been organised for Thursday evenings to enable farm staff and families to strengthen their cultural connections in a friendly environment over shared kai; and cooking classes are also being discussed.

“We want to keep this very community-centred, and everything we do comes from the community. It’s about the committee ensuring that the community realise their aspirations. We are there to support and assist them; it’s not about us telling them what they need to do.” says Renata Hakiwai.

“Whenua Kura is funded by Te Pūtahitanga o Te Waipounamu to develop a sense of community at Te Whenua Hou and it’s about us following the community lead and building on their ideas – on what they want to see happening in their own community. This includes things like a children’s playground, community vegetable gardens, a regular community newsletter and karaoke nights.”

“Once we have one or two trained individuals living within the community, they will be able to provide fast on-ground support in case of an emergency, before an ambulance arrives. This is a significant investment on the part of Ngāi Tahu Farming, as part of our on-going commitment to enriching the farming community and it’s one we feel is important for their wellbeing.”

In the meantime, monthly barbecues have started. These are a successful way of building connections says Claire.

“The barbecues provide a relaxed environment where everyone can interact socially and learn more about each other. In addition, they also demonstrate manaakitanga and whanaungatanga and encourage rangatiratanga and oranga – all key Ngāi Tahu values that we want to encourage every farmer to be a part of,” she says.

“It’s about empowering them to look after themselves and each other and it’s about encouraging them to have a say about what they need and how we are going to achieve it.”