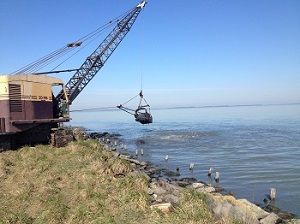 Dredging along the breakwater.

Maintenance dredging of the Halswell Canal from Neills Road to the river mouth is expected to improve drainage and flood capacity in the area, at the same time creating a sediment trap that will ultimately improve water quality of Te Waihora/Lake Ellesmere.

“While dredging takes place, the water will be disturbed and discoloured but the long term benefits of improved flood capacity and drainage, and the trapping of sediment before it gets into the lake, is the main outcome we are looking for,” he says. 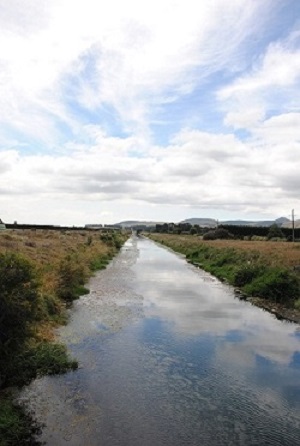 Halswell Canal was constructed in 1898 to drain the low-lying lands between Tai Tapu and the lake, to make them viable for farming. It is approximately 9 kilometres in length and varies from one metre to 2.5 metres in depth. The Rivers, Parks and Survey section of Environment Canterbury is charged with its maintenance and it is dredged, on average, every ten years.

“Over time, silt off the hills and surrounding farms builds up in the bottom of the canal, restricting drainage and river flow. The stretch of canal we are currently working on provides drainage for 11,700 hectares, so it’s important it be well maintained.”

Dan says the areas dredged recover quickly. Prior to starting work, Environment Canterbury consulted with Te Rūnanga o Ngāi Tahu, Te Waihora Management Board and the Department of Conservation; and as part of that cultural awareness, Les Wanhalla of Te Taumutu Rūnanga follows the dragline when it is operating, rescuing eels, mussels and other fish, returning them to the dredged canal. He keeps a record of what and where freshwater specimens are found.

The whole project, including the dredging of a 300 metre channel into the lake to encourage water flow, is expected to take until mid-December to complete.