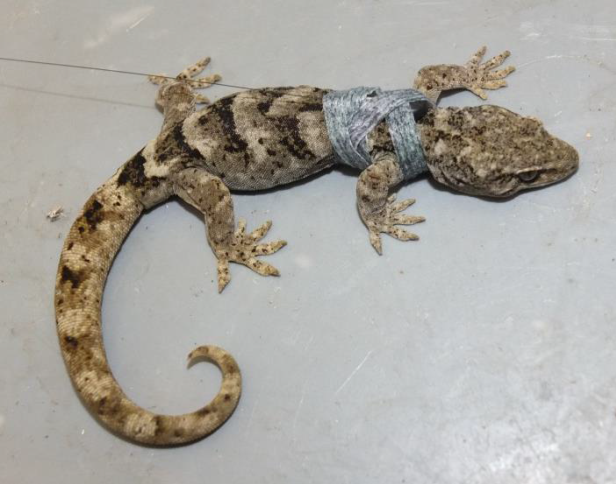 One of the gecko showing off its temporary transmitting device.

In March 2015, the first geckos retrieved from the bluffs above Rāpaki after the Christchurch earthquake, were released into their new home at Riccarton Bush.

Te Hapū o Ngāti Wheke, represented by Yvette Couch-Lewis, formally handed over the kaitiakitanga of the gecko from her rohe in the Port Hills to that of Ngāi Tūāhuriri, represented by Te Marino Lenihan.

A total of 209 Canterbury geckos/moko-pāpā (Woodworthia cf. brunnea) were released in Riccarton Bush. These animals were removed from the Crater Rim Bluffs by abseil access rope technicians because major geotechnical work planned for the area would destroy the geckos’ habitat. Large-scale rockfall risk remediation is needed to allow for the re-opening of the road underneath (Sumner Road Reopening Project).

Guardian of the geckos, Marieke Lettink and Chris McClure have been overseeing the gecko translocation and recording their adjustment to their new Riccarton Bush environment and say they have settled in well.

Although the kahikatea floodplain forest of Riccarton Bush is very different to their former home (creviced bluffs and rock outcrops), the geckos have the best possible chance of survival at Riccarton Bush because it is surrounded by a state-of-the-art fence that keeps out pest mammals (mice, rats, mustelids, hedgehogs, possums and cats; all of which eat lizards). Canterbury geckos are known to have survived in Riccarton Bush until at least the 1980s and would have roamed in forests throughout their range prior to the introduction of mammalian predators.

Adjusting to a new, protected life in Riccarton Bush.

The Crater Rim geckos were released in three large vine-covered kahikatea trees (Dacrycarpus dacrydioides). Nineteen animals (11 females and 8 males) were fitted with small radio-transmitters to allow for tracking of their movements following the release. The transmitters weighed 0.4–0.59 g (≤ 5% of gecko body weight) and were attached to the geckos with a ‘backpack harness’ designed to naturally fall off over time (often when a gecko sloughs its skin).

The radio-tracking was done because very little is known about movements and short-term survival of geckos released in tall forest. This information is needed to inform future translocations and hopefully avoid past failures. One possible reason for the failure of a translocation is that animals may move large distances away from their release site and fail to breed simply because they never meet up with any other animals. This seems to be a problem with native green geckos (genus Naultinus), leading some researchers to contain geckos in temporary pens to foster an attachment to the release site (Knox & Monks 2014).

“The maximum (horizontal) movement detected between checks was 38m, made by a male gecko (males typically travel further than females). This gecko moved a (minimum) total horizontal distance of 69m over the monitoring period. We don’t know why these geckos left the tree. Tree three is surrounded by dense vine thickets, which made it easier for geckos to leave by acting as ‘carriage ways’ for dispersal,” they say.

Geckos from trees one and two had to cross more open ground on the forest floor, which they are generally less inclined to do. Alternatively, it is possible that there were fewer resources (invertebrate food and retreat sites) in tree three. In the last month of monitoring, some of the geckos from the other trees also left: two geckos from tree one (one returning to the tree within days) and four geckos from tree two. No movements were detected after 7 May. It is assumed that all the transmitters have now fallen off.

So where did the geckos go? Most travelled to other vine-covered trees or stumps. One took up residence in a cabbage tree near the release tree.

“We never actually saw the geckos during tracking: with one exception, they were always up trees (usually >5m) and not visible (this was expected as they are normally active on warm nights, especially in the hours after dusk). One gecko from tree two spent time in a pile of sticks at the base of the release tree before moving away.

“We did hear some suspicious rustling and found a sloughed skin with the number 164 still visible on it (the geckos were individually numbered with a non-toxic marker to allow us to keep an eye on their body condition while being temporarily housed in communal lizard cages before the release).”

What next? Marieke will write a full report on this work and its implications by 31 August 2015. The team thanks everyone who has helped to get the geckos to where they are now Christchurch City Council, the Department of Conservation, Riccarton Bush Trust, Abseil Access, Yvette-Couch Lewis and Te Marino Lenihan.