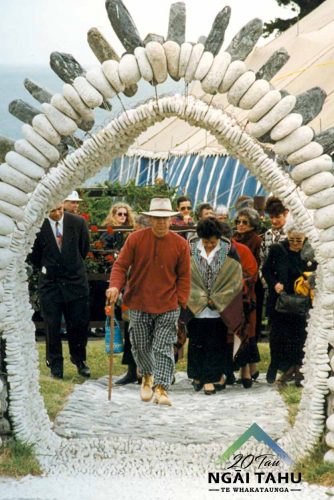 On 21 November 1997, Te Rūnanga o Ngāi Tahu and the Crown signed the Ngāi Tahu Deed of Settlement at Takahanga Marae, a significant milestone in settling 150 years of grievances, hardships and negotiations since the beginning of Te Kerēme – the Ngāi Tahu Claim.

The Deed of Settlement provided acknowledgement from the Crown of the grave injustices suffered by Ngāi Tahu which significantly impaired the development of the iwi.

Now, 20 years on since the signing of the Settlement, which provided cultural and economic redress for Ngāi Tahu, we are pausing to celebrate this milestone and remember and reflect on the journey of the iwi – before and after settlement.

One of the ways we’re acknowledging the dedication of our tīpuna and their determination to settle Te Kerēme is through the creation of a new online resource tekereme.ngaitahu.iwi.nz

Here we have released archival material such as original deeds of purchases, Ngāi Tahu petitions, commissions of inquiry, historical images and video footage to help tell the story of Te Kerēme.

This is a resource for whānau – an opportunity to learn about and reflect on some of the key events leading up to the Signing of the Deed at Takahanga Marae.

A new reference book about Te Kerēme is also being produced by the Ngāi Tahu Archives team to explain the 150-year story in more detail.

For Te Rūnanga o Ngāi Tahu, the year 2017 is about honouring the past as well as looking forward to the future.

We’re also taking time this year to celebrate the successes and achievements of the iwi since the Deed of Settlement was signed – there is much to celebrate and be thankful for, from the Whai Rawa savings scheme , and various educational and environmental programmes, and cultural funding and scholarships available, to the te reo Māori revitalisation programmes and initiatives run through Kotahi Mano Kāika.

Keep an eye out for further online resources and video content which focuses on some of these achievements and showcases how Te Rūnanga o Ngāi Tahu is supporting whānau and creating a prosperous future for our people.

Keep an eye on the Ngāi Tahu website and social media channels for further details to come.