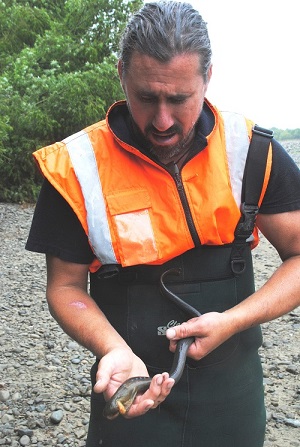 Ngāi Tahu and Environment Canterbury are working together to rescue and relocate taonga fish species from the drought-stricken Rakahuri/Ashley and Waipara Rivers.

Tangata Tiaki (customary fisheries guardian), Te Marino Lenihan (Ngāi Tahu – Ngāi Tūāhuriri), says this is an excellent example of collaboration between a government organisation and local hapū – one that takes the relationship from a political level to a practical, on-the-ground application. He hopes it will lead to the development of stronger relationships with other organisations.

“This exercise has stimulated conversations between a number of different groups – NZ Forest and Bird for instance, who are interested in the welfare of birds that inhabit the braided rivers; and NZ Fish and Game, who have also been working hard to relocate stranded fish species,” he says.

“It’s important when our environment comes under any sort of stress, that we are able to work together; and I hope this will lead to other strategic approaches that pool our resources.”

Following a phone call from a member of the public, alerting him to stranded eels, Rupene organized the first rescue mission, working up the south bank of the Rakahuri/Ashley River, assessing every remaining water hole within the dried river channels.

Using a combination of digging in muddy areas and electric fishing equipment that momentarily stuns fish species so they can be caught without stress, Rupene and his team were able to rescue and relocate 35 tuna (eel), two rare kanakana (lamprey eel), pātiki (flounder), hundreds of lowland bullies and torrent fish, two rare mudfish and several galaxiid species on their first day. Another 35 tuna and one pātiki were translocated from the Ruataniwha/Cam River a day earlier. 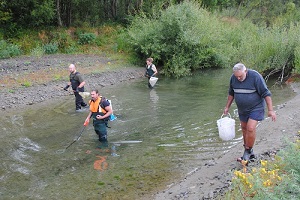 The numbers and species of found fish were recorded, photographs were taken and GPS locations noted. The fish were then released into the Little Ashley River, a freshwater tributary.

“We focused on our key mahinga kai species but of course we saved anything we could that was covered by our Customary Authorisation. At the same time, Fish and Game have been working hard to save other species, like stranded salmon and trout,” Rupene says.

According to Rupene, who has spent most of his life on and around local rivers, drought within the Canterbury river systems is not uncommon but he says the current low flows are the worst he’s seen in the last eight years and with more dry weather expected, he says the situation could worsen.

He has extended the team’s monitoring to include the Waipara River and says that while it is too late to save some fish, they will be monitoring the river systems closely over the coming months, as larger river pools begin to dry up.

While tuna have been the key focus of the recovery, Rupene is pleased they’ve been able to save small numbers of rare species like kanakana and the Canterbury mudfish; and he’s delighted his work with Environment Canterbury has given him the opportunity to initiate this important mahinga kai work.

“It shows the level of trust that has developed between our two organisations and how we’re all working together for the betterment of the environment,” he says.