He Koha – He Ngākau Aroha 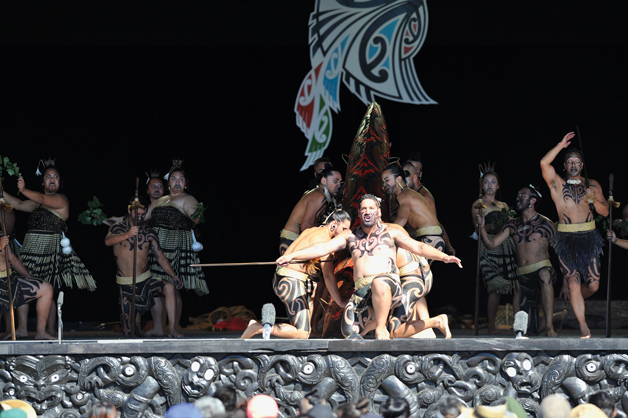 As Kataore (above) came to the end of their performance at Te Matatini 2015, Ngāi Tahu waited at the side of the stage to receive a taonga from the Ngāti Pikiao-based group.

Kataore was one of six groups representing the Te Arawa region at Te Matatini 2015. Their whakawātea (exit) – one of the many connections of Ngāti Pikiao to Ngāi Tahu – talked about the master carvers who traveled to Christchurch to help carve Ārai-te-uru Pā, the pā built in Hagley Park for the New Zealand International Exhibition 1906/07.

Group leaders Riki Bishop and Rie Morris explained the concept behind the gifting of the waka. “When we talked about the whakawātea, we wanted it to reflect not only the master carvers but also to acknowledge the rebuild of Christchurch and what the people experienced during the earthquakes. We took this idea to our kaumātua and mentor, Te Ariki Morehu and he thought it was a beautiful whakaaro and gave us his blessing”, says Riki.

Te Arawa master carver James Rickard was tasked with carving the waka. A tōtara tree was chosen from a land block in Rotoiti and members of Kataore took part in the rituals and karakia when felling the tree and helped carve the taonga.

Kataore take their name from a taniwha and kaitiaki (guardian) of Ngāti Pikiao, who lives on their ancestral mountain, Matawhaura in Rotoiti. Kataore originally was the name of the haka group from Mokoia Intermediate School. A senior group was formed inin 2009. They affiliate to all marae in the Ngāti Pikiao rohe and have based the majority of their practices and wānanga at Te Tākinga Marae, in Mourea. The kaupapa of the group is to promote Pikiaotanga and through kapa haka, the members and whānau learn their traditional stories and history.

It was their second stand at Te Matatini. The first was when they hosted Te Matatini in Rotorua in 2013. Kataore are seen as a contemporary group who use props in their performance to depict their stories and waiata.

At the last wānanga before they started their hīkoi to Te Waipounamu, the waka was finished and ready to be transported to Christchurch. The carvers brought the waka onto Te Tākinga Marae, where karakia were recited. It was an emotional gathering not only because of the kaupapa behind gifting the waka, but for the performers who had practiced so hard over the past months and sacrificed so much to perform on stage in Christchurch.

Te Matapihi from the Te Kāhui Maunga region also traveled to Te Waipounamu intending to gift taonga to Ngāi Tahu. Te Matapihi affiliate to the Whanganui River and base themselves at Kaiwhaiki Marae, north of Whanganui.

Te Matapihi was the Whanganui group that performed every year at the Hui Aranga. There was a desire and passion from some of the members to take the group to compete at the regional level, intending to perform on the national stage. The group was established in 1997 by the late Morvin Simon. Morvin and his wife Kura, tutored the group and have performed at many Te Matatini festivals. The name Te Matapihi, which means ‘the window to the past and the gateway to the future’, was given to them by the late Matiu Mareikura.

Like most of the groups who stood at Te Matatini, Te Matapihi acknowledged their ancestral connection to Kāi Tahu. Their bracket had two kaupapa, the first was to pay tribute to Morvin Simon and longtime performer,Jacinta Patea who both passed away the year before, and to take pakohe stones and gift to Kāi Tahu.

Their whakaeke (entry) talked about a meteor that fell from the heavens and was taken by Tawhaki to the base of Mount Ruapehu. It spilt into two pieces, Rangitaiki and Waitaiki. Rangitaiki was left on Ruapehu and became the puhi or maiden of the mountain. Waitaiki was taken by Poutini to the Arahura river.