In the last issue of TE KARAKA we shared the story of He Rautaki mō te Huringa o te Āhuarangi – the Ngāi Tahu Climate Change Strategy. This strategy was officially launched by Kaiwhakahaere Lisa Tumahai at Hui-ā-Tau, and can be accessed by visiting www.ngaitahu.iwi.nz/environment/policy/climate-change-strategy 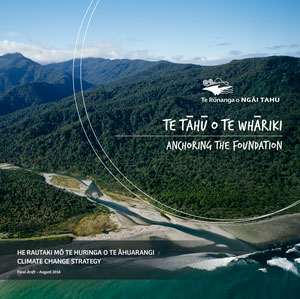 Tēnā koe e te ētita, ki te whānui o Kāi Tahu, tēnā koutou.
Being Māori (and just being a human in general) I am strongly affected by all that goes on in te ao tūroa. For this reason it is always good to know the steps that Te Rūnanga o Ngāi Tahu are taking at a governance level to protect our natural world, such as the newly developed Ngāi Tahu Climate Change Strategy (which featured in the last issue of TE KARAKA, and which I am looking forward to learning more about).

However, I believe it is important for us as hapū, whānau, and individuals to be taking major and radical steps at a grass-roots level in preparing for and mitigating the potentially devastating effects of environmental collapse (among other major global issues such as peak oil). I’d love to hear and participate in more discussion on teaching our people about closed-loop systems, kai sovereignty, waste reduction, and the importance of personal choice in the acts of consumerism and everyday living. This is the essence of tino rakatirataka. As a people, we are known for our resilience. Radical thinking and action have always been a part of our reality. Why? Because our very survival depends on it.
Kā mihi,
Nā Ruby Phipps-Black

A place where trees stood tall, towering higher than we can now imagine. The chorus of the multitudes of birds would have been so dense and majestic that our people built an affinity with them, creating the Māori culture of Aotearoa.

Fast forward to today. We have around 20 per cent of our natural habitat remaining, and only around six per cent of our wetlands. Our estuaries once provided large amounts of resources, but are fast becoming places where we are unable to swim without risk of illness. I wonder, is this the future Matiaha Tiramōrehu envisioned when he lodged the first formal statement for land purchases? Did he understand that the land he sought would be devoid of places in which to harvest food? Our Kāi Tahu whānau are blessed to have amassed a substantial amount of wealth over the last 25 years. We have become corporate giants in this country, and some of the interest from this wealth is being used to increase the capacity and capability of our people to become healthy, wealthy, and wise – to become leaders in this still-changing world.
But our marae – although worth a pretty dollar – are people-poor. We have many heads at the governance level, but our hands and feet – our kaimahi – are few and far between. I do not envy the job of those who are tasked with creating tribal strategies that will benefit the majority of our people on a social and environmental level.

My whole thinking revolves around the idea that we need a complete tribal effort to enhance our natural biodiversity – to enable all of our people to become kaitiaki in action for our whenua, water, and indigenous taoka species. We do have our lovely people from the
Te Ao Tūroa team at Te Rūnanga who do wonderful work in this realm, but they have neither the budget nor the capacity to create change on the level that is necessary.

Our climate change strategy has just been released, identifying the issues that we face and ways to mitigate these problems. But it does not allocate a budget for the only long-term solution – to increase our natural habitat on a phenomenal level. If we don’t start creating new habitat and enhancing that which already exists, we risk losing everything that created the people we are and the culture we represent.

THE LINK BETWEEN CULTURE AND CULPABILITY – OFFENDING HURTS US ALL 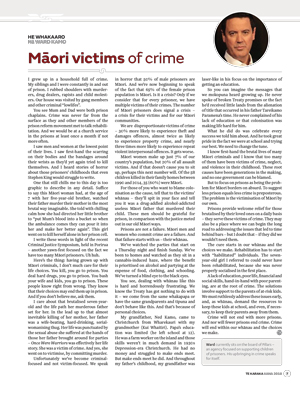 Ko tātou, tātou
I write in response to Ward Kamo’s column in the last issue of TE KARAKA entitled “Māori victims of crime”. Whilst I agree with Mr Kamo in so far as we must support our Māori victims of crime, in my view, his definition of the word “victim” is too narrow.

Ways of addressing issues within the criminal justice space effectively are not as “simplistic” as Mr Kamo states in his column and various interviews following its publication.

Offending harms offenders, their whānau, the victim/s and their whānau, and the community. Offending is not acceptable in either Pākehā or Māori legal/ethical frameworks. However, if we want to be truly effective, we must understand the context that the offending takes place in.
In my role as a lawyer within our takiwā, I see the effects that our criminal justice system, the Family Court, and state care have on our whānau. I also see the effects that colonisation continues to have.

I do not exclusively attribute blame to colonisation, but it is one of the numerous factors which underpin criminal justice reform. We cannot ignore the effects colonisation continues to have on our whānau.

As Māori, we must understand the link that culture has to culpability. This area has been subject to an increasing amount of research and jurisprudence over the years. Many whānau are disconnected from their culture. They are not enrolled as members of their iwi. They do not know their marae. They do not know their whānau. Clear evidence can link this outcome to the effect of colonisation and the breakdown of customary whānau structures, values, and strength. Not all whānau are lucky enough to have parents or grandparents to learn from, as described in Mr Kamo’s article. In some cases, authorities know more about a person’s whakapapa from their health records than the person does. When we reflect on whānau who are in these types of positions, we must ask ourselves as Ngāi Tahu, “What can we do about this?”

Around 75 per cent of prisoners have spent time in the care of Oranga Tamariki, uplifted from their whānau and put into strangers’ care. The disconnection can be so strong that the person feels that the world is unsafe for them emotionally and culturally. This means that they have not built the appropriate resilience to participate in society, and are merely surviving. Some of our whānau feel there are no resources or support. Such feelings can lead many young Māori to a life within gangs – the only context where they feel they can find support and belonging.
At a recent Māori lawyers conference in Rotorua, Matua Moana Jackson summed it up when he said it is time that we prepare ourselves to welcome our whānau back. It is time we care for our whānau and step up to provide the appropriate supports to reduce offending, so our whānau are no longer victims. Because at the end of the day, our whakapapa binds us all together, no matter what our upbringing.
Nā Jamie-Lee Tuuta
Moana Jackson has also written his own response to Ward Kamo’s column, which can be found on the following page.

We welcome input from our readers.
Please submit your thoughts on the content we publish.
BY EMAIL: [email protected]
BY PHONE: 03 974 0177
BY POST: Te Rūnanga o Ngāi Tahu, PO Box 13 046, Christchurch 8141.
TE KARAKA reserves the right to edit, abridge or decline letters.
Letters under 300 words are preferred. The writer’s residential or
email address is required, and a telephone number is helpful.