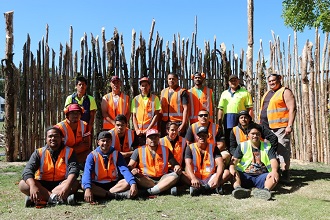 Around 50 He Toki ki te Rika Māori Trades Training and Pasifika Trades Training students, alongside CPIT staff, helped to make Te Matatini 2015 the memorable event it was from 4-8 March.

Programme Manager, Māori Trades Training, Hemi Te Hemi says the students worked on painting, building and installing various features of the site venue in North Hagley Park, contributing to both the smooth running of the event and their own cultural competency.

“The fact that He Toki ki te Rika and Pasifika Trades Training consortia were right behind our students participating in the kaupapa ‘He Ngākau Aroha,’ as part of this year’s Te Matatini was amazing,” he says. 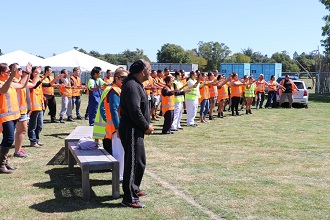 “Over a week, the 50 or so students and staff who participated indicated that being part of the set-up was a privilege. It was also an incredible honour for them to be asked to join the pōwhiri and to support the installation of the pounamu boulders as well.

“The students were able to share in the pride alongside rūnanga, iwi and the wider Christchurch community and for many of them, it was a life-changing event. They loved it and were proud to be a part of it.”

He adds that the students were delighted with the 4-day passes and hats they were given in recognition of their mahi, that they enjoyed being there as spectators, taking pride in the work they had contributed to.

Both volunteer organiser Kim Wetini and Puamiria Parata-Goodall, local operations manager for Te Matatini, were grateful for everything the students contributed to the event. 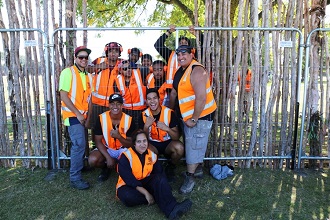 “To everyone who voluntarily gave of their expertise, their skills and muscle, it was really humbling to watch you all in action. E kore e mimiti te puna aroha,” Puamiria says.

“Te Matatini 2015 has really set a benchmark for all future festivals. Each and every one of us should be proud of your contribution to ensuring that our venue, our festival and our people oozed ngākau aroha.”

Hemi Te Hemi says He Toki ki te Rika is a unique Māori programme and while students have previously contributed to small community projects, like marae fence building, this was the first time they had participated in a major event.

“The value they gained from participating in a national event like this was massive,” he says.
“For us at He Toki ki te Rika, it’s all about identity and understanding the value of iwi aspirations – it’s about developing a whole sense of cultural identity. The work our students did at Te Matatini contributes in a big way to the cultural competency section of their work readiness passports. It was a massive success and it reaffirms the Ngāi Tahu commitment to social change.”