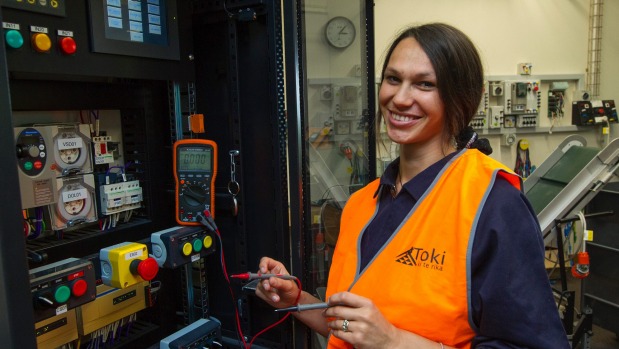 A magical combination of wishful thinking and pro-activity changed Ana Mayo’s life, energising her for a career in electrical engineering.

Mayo, raised at White Rock, near Rangiora, says her fortunes turned for the better after she gave up a workaday job in a Christchurch skincare factory.

At the time, Mayo was struggling for direction, both personally and professionally.

Ironically, the profession she is now qualified for could one day enable her to install smart electrical systems on her old factory production line.

The former Rangiora High School student once aspired to be a chartered accountant. But after four years of studying accountancy at the University of Canterbury, she was convinced that book-keeping wasn’t an option for her.

She also had little sense of iwi affiliation, although she was aware of her father’s connection to Ngāti Porou at Tologa Bay near Gisborne, and in her late teens, she became registered with Ngāi Tahu.

Leaving university without a degree, Ana bounced off to Australia for a couple of years – soaking up sun and fun with various work between times.

Returning to Christchurch, she was slogging it out in the skincare factory when she noticed a dandelion wafting indoors, an intrusion that demanded she take it outside. In a moment of melancholy, she released the dandelion and whispered a prayer to herself.

“I can’t quite remember the prayer now but it was something like ‘show me the path to success’.”

The next morning, she received a text message from the He Toki trade training programme, inviting her to apply for a study scholarship.

He Toki is a trades training programme for Māori that brings together the strengths, knowledge, capability and networks of Te Rūnanga o Ngai Tahu, Hawkins Group and Ara Institute of Canterbury.

To this day, Ana has no idea who identified her as a prospective student for the trade training. Whoever did, they spotted her potential correctly.

Having been raised on a farm, Ana decided training for a career in electrical engineering was the sort of hands-on training she would enjoy. “I really fell in love with it, right from the start. I really loved learning and all the practical things, like working with wiring and motors.”

Joining He Toki was transformational, alerting her to career opportunities and connecting her to a wealth of teaching and emotional support. He Toki also gave her an insight into Māori cultural values she had never been aware of previously.

Early on during her training Ana discovered she was pregnant. He Toki extended helped her to keep up to date with course content while she pregnant and then committed to caring for her young child. As an expectant mother living in Rangiora, she had no car and was reliant on a bus to connect her to Ara’s trade training campus at Woolston.

“He Toki also funded me while I struggled to raise Inaiah once she was running around. I was greatly honoured by this.”

Somehow, He Toki made it work. “I think He Toki is pretty amazing,” she says.

It helped that Ana was an exceptional student. In her second full year of study, Ana was judged supreme trade student, the best electrical engineering student, and top Māori student. She now has a National Certificate in Electrical Engineering, Level 4.

Little bothered her on campus, including being one of just a handful of women among 80 men studying electrical engineering at the institute.

Combining family and study became progressively harder as Ana’s daughter Inaiah grew up. But Ana, supported by partner Julian, made it through the study and the strain of surviving on a single income.

Ana is expecting a second child in August so she has put career plans for electrical engineering on hold for at least three years. However, she’s determined to launch into a career once the time is right for the family.

Her partner Julian is working up to 65 hours a week to sustain them financially, while Ana has recently been offered a handful of hours per week in a financial role. Ana says electrical engineering is still top-of-mind in her career planning. “It’s my passion and I really love it.”