Winter is a time of rest for both the māra and the gardener. There are, however, still tasks that need to be carried out in preparation for the growth and abundance of spring and summer. The winter vegetables need to be kept an eye on to ensure that the weeds don’t take over. They also need regular liquid fertiliser to help promote growth and a spray with liquid pyrethrum (organic) to ensure there isn’t a sudden infestation of pests such as whitefly. Whitefly like attaching themselves to the underside of brassica leaves, particularly kale and broccoli – I have had to be on the ball recently to ensure that they don’t get out of control on my plants. They have become an issue in my tunnel house, as they thrive inside its warmer environment in winter. It’s a bit disconcerting bringing kale leaves in for the evening meal, only to find a swarm of whiteflies flying around my kitchen when the kale leaves are washed. Why kale? Kale deserves its reputation for being a superfood, which pre-dates it being a modern fad – when I was living in rural Denmark in the 1990s, I learnt of a local saying that means when a farmhouse has kale growing in its garden, then those living there won’t need to visit the doctor very often. 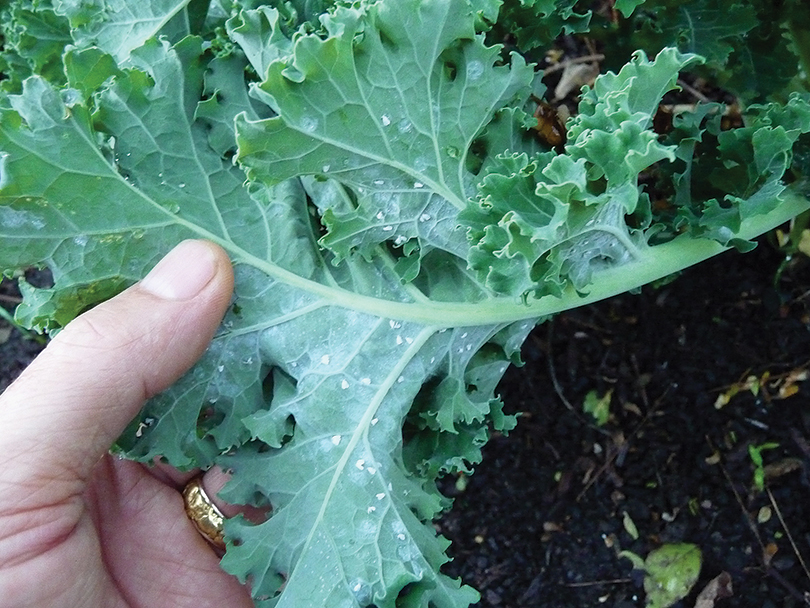 Above: whitefly on the underside of a kale leaf.

Fruit tree maintenance
A key task for me in winter is to prune my fruit trees (apples, cherry, and plum). If left to themselves, they become overgrown. When overgrown, they don’t fruit so well. The general focus of my pruning efforts is to ensure that the tree has a compact form: for example, with apples, this is a general vase-like shape, opening out upwards. The dead and diseased wood also needs to be cut away. I also make sure there is no overcrowded inwards growth that stops sunlight from getting in and fruit being able to form to their natural extent.

This type of pruning also helps keep disease at bay, so it is necessary to remove all the pruned material away from the base of the trees. Some people like to be finicky about how the cutting is done, but I haven’t found that it actually matters so long as it is a clean cut. Feijoas can be pruned with hedge shears, but I wouldn’t recommend this with other fruit trees.

Established fruit trees benefit from having mineral and compost fertiliser applied around their base at this time of year, as they will need the nutrients to support their growth as the weather becomes warmer.

With my cherry tree, I need to keep its height down and branches compact so that I can keep it covered with bird netting during the fruit ripening stage in summer. This inevitably leads to my annual discussion with my wife who thinks I always over-prune, but cherry trees can handle a robust pruning, and our one always bounces back and produces abundantly.

Late winter to early spring is also a good time to plant any new varieties of fruit trees, and while they can take a few years to fruit, they can supply decades of healthy and tasty food. When planting fruit trees, it pays to dig a big hole and put in copious amounts of compost to help them become established. Established fruit trees benefit from having mineral and compost fertiliser applied around their base at this time of year, as they will need the nutrients to support their growth as the weather becomes warmer. 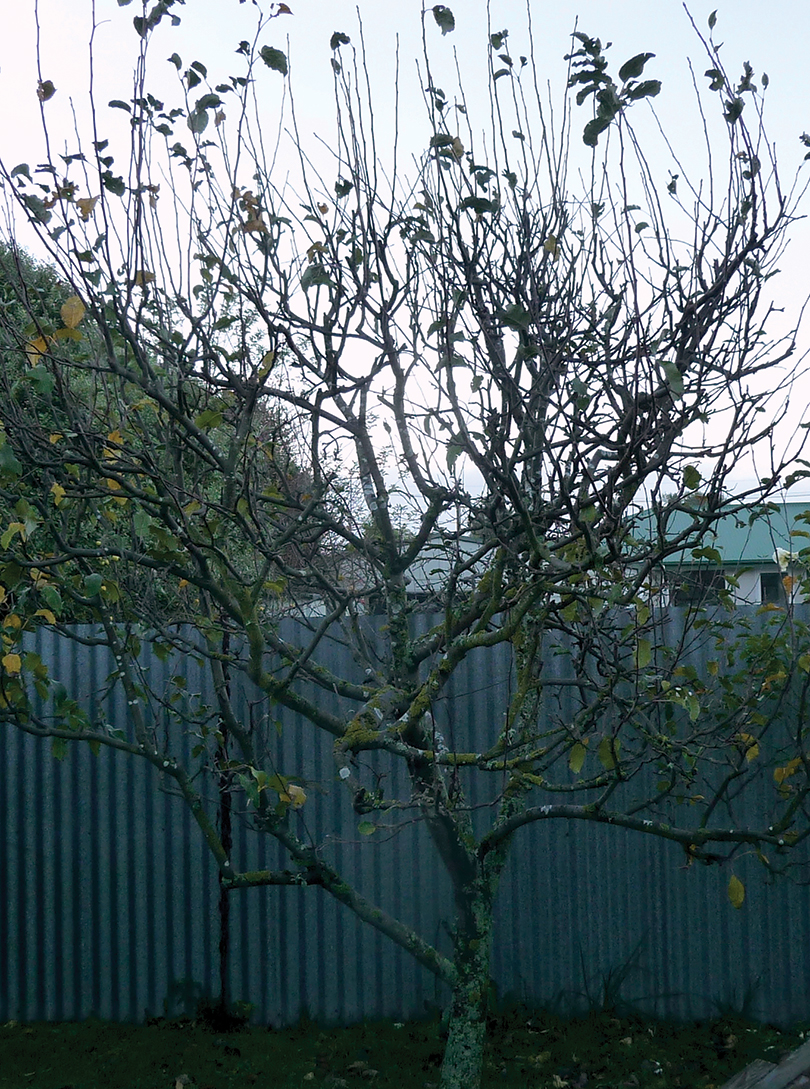 Chlorination
The chlorination by the Christchurch City Council of the city’s water supply turned out to be much worse than I feared. The water smelt worse than a public swimming pool and all attempts to boil and leave water standing for 48 hours could not get rid of the chlorine in our drinking water. Showers left me feeling gassed and doing the dishes I had to use gloves, but still ended up feeling queasy just from standing over the fumes coming from the sink. Not surprisingly, myself and others in my whānau broke out in skin rashes and had gastro-intestinal pain. The news that the underground water infrastructure of Christchurch has been largely left unrepaired due to the previous government pulling funding to help balance its budget will mean that chlorination of the Christchurch water supply will be ongoing for many years in my opinion. This required drastic action on our part, so we paid to have an HRV water filtration system installed on the water line that comes onto our property. In this way all the water we use on our property has now been filtered to remove 98 per cent of the chlorine, making it much healthier for both people and the māra.

Matariki – the Māori New Year
At this time of the year I like to reflect on the fact that six years ago I was told I had terminal cancer, and only had 3–6 months to live. Due to my bloody-minded stubbornness and imagination to go beyond the conventional (and more than a little help from my tīpuna and organic food) I am still very much alive and healthy today. I now know the value of preparing for an uncertain future where you never know what is around the corner – for example, the earthquakes we have been experiencing since 2010. At this time of year, I replenish my emergency water supply by chucking out the old water and replacing it with fresh new water. Also, I check any food I have put aside, use the old food, and replace it with new food, along with any medical supplies.

Matariki is also a good time to ponder the future of Planet Earth itself. Earth is a constantly evolving place that is open to the energy that comes from the sun and the cosmos. This cosmic weather affects the planet as it undergoes its own short and long-term energetic cycles, such as with the reversal of its magnetic poles that is currently underway. This magnetic pole reversal started in the 1850s, and by 2000, Earth had lost 10% of its magnetic shielding. By 2010 it lost another 5%, and is on track to lose another 5% by 2020. In other words, the ongoing loss of the Earth’s magnetic shield is letting in more solar and cosmic energy, resulting in more extreme weather events, earthquakes, and volcanic activity. After the magnetic poles flip, the Earth’s shield will return to normal strength, some time next century.

Earth’s magnetic field could flip within a human lifetime
http://news.berkeley.edu/2014/10/14/earths-magnetic-field-could-flip-within-a-human-lifetime/

Energy from Space: The Shift Has Begun
https://www.youtube.com/watch?v=nsqZJP54shg