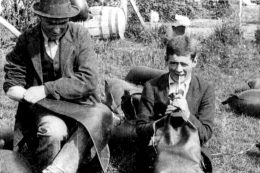 Ngā Taonga Sound & Vision will showcase a film about traditional Ngāi Tahu mahinga kai and art practices dating back to the 1920s at Hui-ā-Iwi in November.

The programme is made from film footage from the 1920s through to 2008, and is a combination of silent, audio, black and white and colour footage.

Ngā Taonga Sound & Vision research cataloguer, Lawrence Wharerau (Ngāpuhi) says the programme is a result of collaborating with Ngāi Tahu whānau, Papatipu Rūnanga, and various right holders, and it took around eight months to co-ordinate and bring together.

“The footage that we intend to bring to Ōtepoti is based around Ngāi Tahu art and traditional mahinga kai gathering practices such as tītī (muttonbird) harvesting. The point is to make it informative and entertaining to show some of the past practices,” he says. 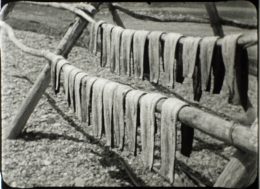 Mahinga kai sits at the heart of the Ngāi Tahu iwi and includes the traditional gathering methods of food and other natural resources. Some of the well-known mahinga kai practices include the harvesting of flax for weaving, clay for dying, and kai gathering such as tuna (eel), kōura (crayfish), kanakana (lamprey), and pātiki (flounder).

Lawrence says that by taking collections and material back out into the community, people can reconnect with old knowledge and with people they may recognise and know. He is keen for as many Ngāi Tahu as possible to attend but everyone is welcome.

“Even though it is about Ngāi Tahu practice and people, we think everyone will enjoy the footage, Māori mai, Pākehā mai.

“We think people will find it interesting and we hope they will learn a bit about how Ngā Taonga Sound & Vision works too. The kaupapa of mahinga kai is demystified, so we hope people will go away with a better understanding of what it means,” he says.

The film is scheduled to play on Friday 20 November, 7pm at the Dunedin Town Hall. It is 75 minutes long. At the end of the screening, there will be an opportunity for audience members to ask Lawrence questions and to give feedback about the film.

Hui-ā-Iwi 2015 will be held from Friday 20 – Sunday 22 November and will be a celebration of all things Ngāi Tahu. It is an opportunity for all to share in whakawhanaungatanga and experience the best of Ngāi Tahutanga. All Ngāi Tahu are welcome to attend and there will be an open day on the Saturday for all members of the public. Come along and join us for music, kai, wānanga and much more. If you would like to contribute to Hui-ā-Iwi visit the Ngāi Tahu website for more information and registration forms: http://ngaitahu.iwi.nz/ngai-tahu-events/hui-a-iwi-2015/