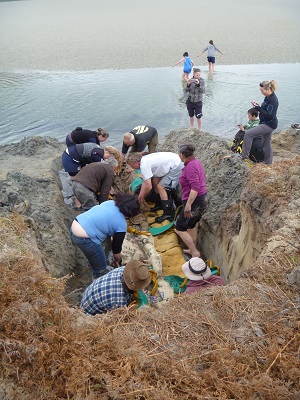 Members of the rūnanga, along with archaeologists, conservation experts and other volunteers, visited the site on 11-12 October, and excavated the waka hull and a large quantity of plaited fibres lying in its hull.

The recovery of the taonga was a success and Department of Conservation (DoC) representatives Jim Fyfe and Russell Tomlinson facilitated the group while the waka was lifted from the ground.

It is the first waka to have been discovered on Otago Peninsula and it measures a staggering 6.17 meters long, 0.59 meters wide and 0.26 meters deep. The relic was buried in 1.6 meters of sand, which helped preserve the waka and the plaited fibres for hundreds of years.

DoC archaeologist, Shar Briden says it is rare to find waka in the Otago region, especially one that is from an archaeological context.

The group have been vigilantly monitoring the site at Ōkia since 2005 and Ōtākou Rūnanga kaumātua, Edward Ellison, says it is important that the group continues to dedicate their time to observe the site.
“We have people who have been monitoring the site to ensure people aren’t fossicking around in the area and destroying evidence,” he says.

The group are delighted to now know that the waka hull is made from totara (podocarpus totara) however, they are yet to identify the material of the plaited fibres, which are thought to be associated with fishing or rigging of the canoe. 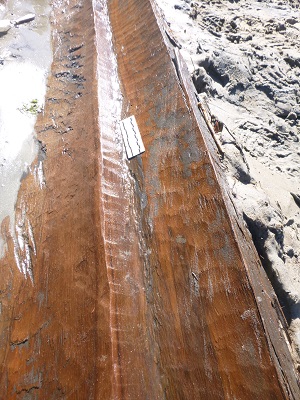 They say the waka was produced by using adze during the pre-European era, as there are clear adzing marks.

“Of particular interest is the locally-sourced stone used to make adzes for wood working, and the stone flakes used for cutting or scraping, rather than the use of imported stone for some tasks. Trachyte was used to make some of the adzes, which came from south Papanui Inlet and opal quality flakes (Puddingstone) came from Cape Saunders. Imported stone occurs along the occupation sites; obsidian, pounamu chisels, orthoquartzite or silcrete,” says Shar.

The taonga are currently stored at a secure location and Dilys Johns, Senior Research Fellow in Conservation at the University of Auckland, will work closely with the rūnanga to conserve the waka and the strands of fibre.
“After removing chlorides from the waka, I will conserve it using polyethylene glycol followed by controlled drying. I am hoping the waka can stay out near Ōtākou Marae, so iwi members can participate in the process,” says Dilys. 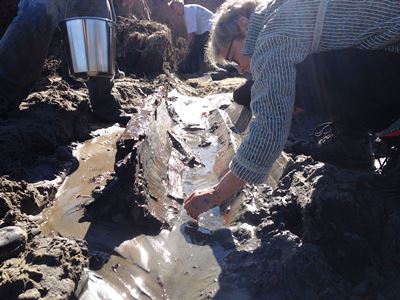 Prior to retrieving the Otago Peninsula objects, the group were successful in gaining approval from New Zealand Heritage to go ahead with the excavation process.
Evidence indicates that the Papanui Inlet was an area of known occupation.
“The taoka from Papanui Inlet/Ōkia Flat provide evidence of occupation along the Papanui estuary shoreline. The unearthed smashed waka may provide evidence of the known stories of skirmishes that took place between Ngāti Mamoe and Ngāi Tahu on Okia Flat, giving significance to the taonga and kōiwi currently being recovered along the foreshore,” says Shar.

The group are yet to find out who the waka belonged to but Edward says he has an inkling – although it will come down to the age of the taonga.
“It could have belonged to Ngāti Mamoe and there is a remote possibility that, if it is older, it could be associated to Waitaha. It’s more likely to be Mamoe given the oral traditions of their association to that part of the Peninsula” says Edward.

To determine the age of the taonga, small fragments of both the waka and the plaited fibres will need to be tested. The method most likely to be used is C14 radiocarbon dating. Finding out the age of the objects will allow the group to get a better understanding of who the waka may have belonged to.

Edward says the discovery of the taonga will provide the rūnaka with an opportunity to refocus on the history of the tribe in that part of the Peninsula and the possibilities that provides to identify important connections to tīpuna.

“The physical taonga is absolutely amazing,” he says.

The group will work together to ensure the taonga are well-preserved for future generations.