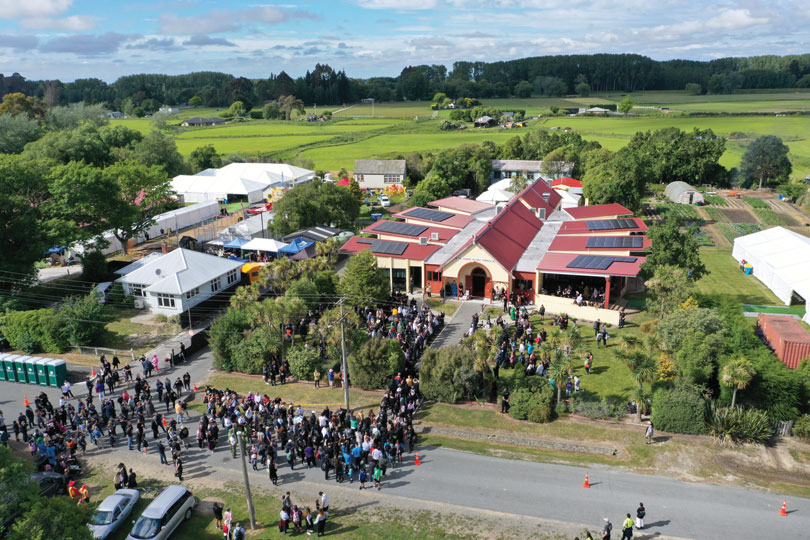 It’s been three long years since our Kāi Tahu whānau have been able to gather konohi ki te konohi, but on 26 and 27 November, hundreds of whānau came together at Arowhenua Marae to celebrate all things Kāi Tahu.

The excitement was barely contained on the Saturday morning of Hui-ā-Iwi as whānau began arriving early, waiting outside Te Hapa o Niu Tireni, ready for the pōwhiri. Thankfully, the sun replaced expected rain as proceedings began. Later, kaumātua met
in the kai marquee for a long overdue kapu tī and kōrero while the stalls opened for business and whānau geared up for early Christmas shopping. There was a great range of food on offer from donuts, burgers and salmon bagels to more traditional kai Māori such as īnaka fritters, fry bread and an umu.

For those interested in hearing more about the business of Te Rūnanga o Ngāi Tahu and Ngāi Tahu Holdings Corporation (NTHC) there was the report back on annual results. There were also panel discussions with Te Kura Taka Pini co-chairs, Lisa Tumahai and Professor Te Maire Tau, on the rakatirataka of Kāi Tahu, the freshwater claim and Three Waters; and the Ngāi Tahu Archive team on Tāngata Ngāi Tahu: People of Ngāi Tahu, Volume 2.

Te Atakura brought whānau of all ages on stage to share not only their talents, but their love for haka and waiata. It was a fantastic showcase of the rūnaka from north to south.

While some whānau opted to listen to the presentations, others attended workshops on weaving, making taoka pūoro, or were caught up on long overdue whanaukataka.

Heavy rain on Sunday didn’t stop whānau from turning up to listen and participate in the Open Forum. Te Rūnanga o Ngāi Tahu leaders answered various questions from housing support for whānau to plans on farming and how funding from the government to prevent tamariki entering state care was spent.

A huge mihi to Arowhenua Rūnanga, the volunteers and kaimahi of Te Rūnanga o Ngāi Tahu, who worked tirelessly over many months to ensure Hui-ā-Iwi could go ahead. While the rain may have caused a few issues in the marquees, nothing dampened the spirits of whānau reconnecting after such a long time apart.