Scientists love a good mystery, but ecologists from Lincoln University have truly been left scratching their heads after an exhaustive but futile search for a rare and endangered species of flightless Canterbury ground beetle. Kaituhi Rob Tipa reports. 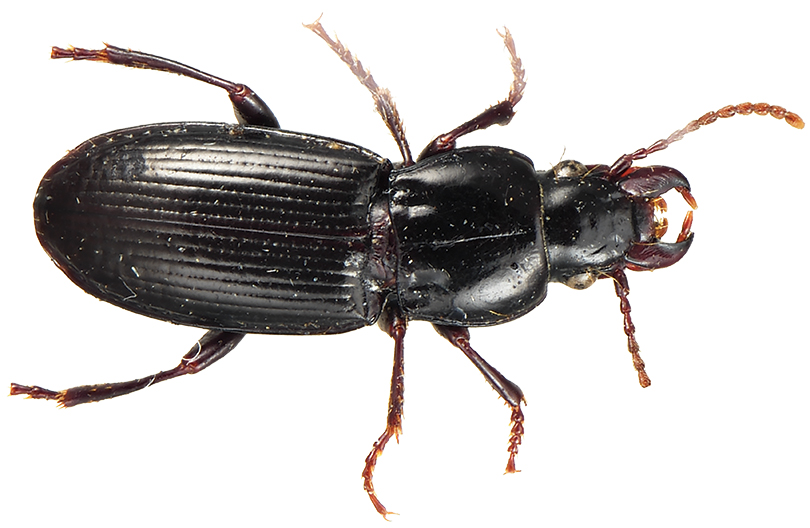 Only 10 specimens of the Eyrewell ground beetle (Holcaspis brevicula) have ever been captured. All were found in the Eyrewell Forest, an exotic pine plantation 40 kilometres north-west of Ōtautahi, which was returned to Ngāi Tahu in 2000 as part of the Ngāi Tahu Settlement Act of 1998.

Five of the elusive ground beetles were found between 1958 and 1967 by forestry workers. The other five were found between 2001 and 2005 scattered through pine plantations as a result of an extensive survey involving close to 60,000 trapping days by the University of Canterbury School of Forestry.

The land originally belonged to the Ngāi Tahu hapū of Ngāi Tūāhuriri and was purchased by the Crown in 1848 as part of Kemp’s Deed, the agreement that sold eight million hectares of land in the Canterbury region for the sum of 2000 pounds.

As Crown land it was administered by the New Zealand Forest Service, which cleared the native mānuka and kānuka bush and planted it in Monterey pine (Pinus radiata) between 1928 and 1932. Most of the 6764-hectare Eyrewell Forest remained in plantation forest until it was returned to the iwi in 2000.

In 2010, Ngāi Tahu Farming, which manages the land on behalf of the iwi, saw an opportunity to produce a higher economic return from farming, and started felling the pine forests, converting the land to create Te Whenua Hou – 6700 hectares of irrigated pasture for dairy and beef farming.

Recent media coverage of Ngai Tahu Farming’s development of the Eyrewell Forest speculates whether or not the Eyrewell ground beetle is already extinct, and if enough was done to protect its remaining habitat.

Some critics claim that setting aside a reserve of plantation pine where the beetles were originally found could have given the beetles a fighting chance of survival.

Ngāi Tahu Farming recruited Lincoln University as a research partner in 2013 to advise it on the restoration of native habitats at Te Whenua Hou.

Lincoln University ecologist Dr Rebecca Dollery says the project is particularly close to her heart, because her doctoral thesis was on the ecological restoration of the native kānuka communities in South Canterbury, based on Te Whenua Hou development.

While the thesis focused primarily on plants and soils, it also involved monitoring populations of birds, mammals, lizards, and invertebrates.

“There are so many positives to this story,” she says. “We’re trying to do our best to restore an area that was an exotic pine plantation into something which is native that benefits a whole host of species, not just an elusive beetle.”

She says the Eyrewell ground beetle presents a real conundrum and has raised many questions for researchers.

Lincoln ecologists began to question their survey technique of using pitfall traps, so switched to using wooden discs, wētā motels, and hand searches to try to find the beetle.

“The conclusion was maybe the population was so small it was on the cusp of extinction anyway … or it’s really good at hiding,” Rebecca says.

Despite a huge survey of the Eyrewell Forest involving close to 60,000 trapping days between 2001 and 2005, only five beetles were ever found, all in pine forests and never in the original native mānuka/kānuka scrub. 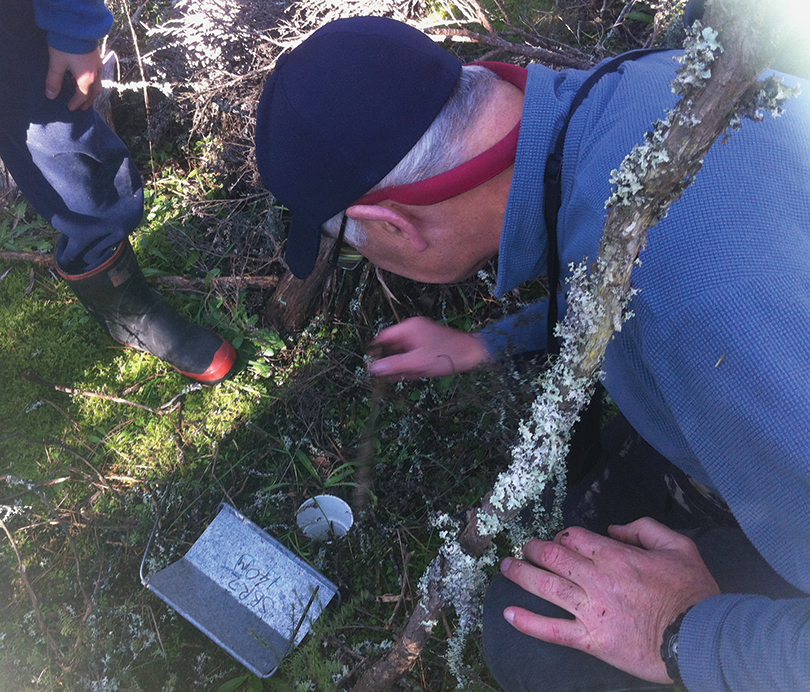 Above: Lincoln University staff have spent thousands of hours searching for the Eyrewell Beetle to no avail.

The Lincoln team has conducted thousands of trapping days every year since 2013, and has not found a single specimen.

“That was unusual,” she says. “It’s quite bizarre that we have found nothing. Even if they had been marginalised in their native habitat, you would expect to find one.”

Rebecca’s Lincoln University colleague, entomologist Mike Bowie, agrees it is surprising that the beetle has never been found in native vegetation.

“There would have been native carabids (ground beetles) living in native kānuka/mānuka vegetation, but whether this particular species was here originally raises an interesting question,” he says.

“It has never been found in any of the remnants of kānuka that are remaining at any of the monitoring sites. They’ve only ever found it in pine forests, which is quite interesting in itself.

“It could have lived in the original forest cover, but in my experience pines don’t usually provide a good habitat for native carabid species. We have found other species in there, but in recent times we haven’t found many carabid species there.”

That raises two possible scenarios. The beetle may have adapted from native vegetation and moved into the pine plantation, or it could have come from somewhere else, possibly as a passenger in pine seedlings brought to Eyrewell Forest from some other area.

Mike believes that is “certainly worth investigating”. He would like to see DNA work done on pinned specimens of the Eyrewell beetle, and a comparison made with the DNA of other carabid specimens from around the country.

As a conservationist, Mike says it is frustrating to think that the chance to save a species may have been lost, but he says, “It was out of our hands by the time we arrived on the scene.”

Researchers also have some doubts about the original identification of the species.

Within this family of beetles, there are about 10 species related to the Eyrewell ground beetle, but their population distribution overlaps. Lincoln researchers wonder whether there may have been some confusion in identifying it as a separate species.

The beetle was originally described in a paper in 1984 detailing 31 of the total of 35 Holcaspis species in New Zealand. That description was revised in 2001 after the examination of just two male individuals.

The species was actually identified by the shape of the male reproductive organ of these specimens, a technique commonly used to distinguish carabid species.

While that work was done by highly skilled people, Rebecca says that description was only based on two male specimens, “which is not a lot to go on.”

Ngāi Tahu Farming Chief Executive Andrew Priest says the importance of protecting an endangered native species is a real concern for the iwi, and that is why the company has invested a great deal of time and money trying to find it.

Since 2013, Ngāi Tahu Farming’s Lincoln partners have placed between 10 and 40 traps at 14 different sites for 30 days spread over six years, which equates to about 30,000 trapping days.

“We are concerned that we haven’t been able to find what is described as an endangered species, and that’s why we are continuing to look for it and are still trying to find it,” Andrew says.

Ngāi Tahu Farming has changed some of its pine forest harvesting techniques in reserve areas close to where the beetles were found to leave forest slash and waste wood on the ground as a natural habitat for ground beetles.

At least another 100 hectares of land has been set aside for restoration into kānuka and native shrub reserves as part of the iwi commitment to plant 1.2 million trees at Te Whenua Hou.

While Ngāi Tahu Farming takes the importance of protecting an endangered species of ground beetle seriously, Andrew regards recent media coverage of this issue as a distraction from some of the other positive environmental work the company is doing at Te Whenua Hou.

He believes Ngāi Tahu Farming puts more resources and funding towards offsetting its farming footprint than most farmers in New Zealand. Specifically, technologies to reduce water use and nitrate leaching, native plant restoration in dedicated reserve areas, and climate change action through a commitment to reduce greenhouse gas emissions.

“We have invested a substantial amount minimising our water application and thinking creatively about how we can reduce our nitrate footprint, and that is totally supported by the evidence we have.

“We’re the first and I think we are still the only farming business to have signed the Climate Change Coalition to reduce our greenhouse gas emissions by 29 per cent by 2030. No other farming company has committed to that.

“We are still working through how we are practically going to meet that target, but we have committed to it, and that story has never really been told.”