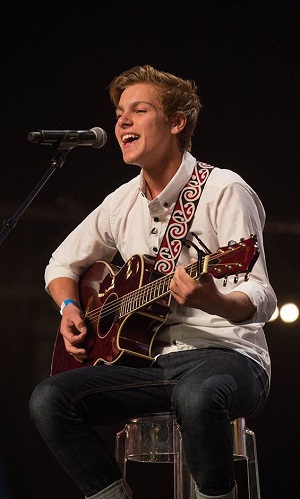 At just 15, Micah Heath (Ngāi Tahu – Waihao Rūnanga) is used to performing in front of big crowds. The aspiring singer-songwriter often performs at local, Christchurch events and he was recently a contestant on the X Factor New Zealand.

“My X Factor experience was absolutely amazing. I was around cameras a lot and it really opened my eyes to the music industry, and what it would be like to have a professional career in music. It was really exciting and I met some awesome artists,” says the Year 11, Burnside High School student.

Micah’s passion for singing started at an early age, and he says his involvement in primary and secondary school kapa haka helped him to memorise lyrics.

Micah says there are many people who have influenced him musically, including his nana, mum and British performer, Ed Sheeran.

“My nana is an incredible singer as well as my mum. When I was younger my nana would sing to us.

“Ed Sheeren is a major influence for me just because he is so genuine, he doesn’t need any expensive things, all he needs is his guitar, and that’s really cool.”

A self-taught guitarist, Micah also plays the ukulele and has played keyboard in the past. He says these instrument-playing skills have helped him to develop his songwriting abilities. 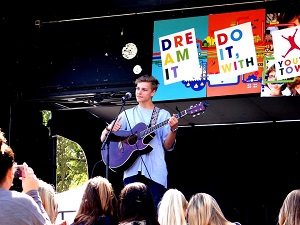 Micah Heath – looking forward to a future in music.

“I mainly write about how I’m feeling, whether I’m happy or excited, and I also write about things that are political, like bullying.

“When I was about seven, my mum started giving me guitar lessons but it wasn’t until I was around 12-years-old that I decided that I was going to became really good at it.

“As soon as I picked up the first four chords on the guitar, I started writing my own songs and putting my own experiences into music. I really enjoy playing around with different lyrics,” says Micah.” .

The Ngāi Tahu teen can often be seen performing at youth events around Christchurch, most recently he was one of the line-up acts for the Linwood Youth Festival Experience event and last year he collaborated with fellow Christchurch singer Nakita Turner.

“I was involved in an anti-bullying campaign with Nakita Turner and she wrote this song about bullying and her personal experiences – One voice. It was such an amazing experience and I got to go into a recording studio.

“I really want to do be involved with helping make a difference in the youth of today – whether that’s through music or not, I want to help others,” he says.

Although Micah still has two more years of high school he says he hopes to one day pursue a career in music and for now he will continue performing and busking around Christchurch.