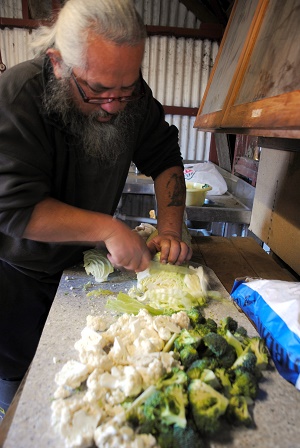 For generations mahinga kai has been an offering of manaakitanga and Te Matatini 2015 will be no exception.

As this whakataukī states: Nā tō rourou, nā taku rourou ka ora ai te iwi – With your food basket and my food basket the people will thrive, food is an integral part of Māori culture.

Karl Russell (Ngāi Tahu, Ngāti Huirapa/Ngāti Ruahikihiki, Ngāti Māmoe, Waitaha) is the mahinga kai coordinator for Te Matatini 2015. It’s a job that he has tackled with ease, as the practices of mahinga kai are both a passion and a way of life for he and his whānau.

Outside of his role for Te Matatini, Karl works as the Arowhenua Marae cook and this is a role that his father, George Te Kite Russell previously occupied for some time.

Mahinga kai is a part of Karl’s whakapapa. He says he is against commercial mahinga kai instead, he prefers to stick with traditional ways of gathering and cooking, like the kāuta (traditional Māori cooking shed).

“Back in the day when times were tough and we had big families, you had to supplement the whānau with kai. Part of my mahinga kai is about knowing the kōrero and whakapapa of the kai. If you know the whakapapa of the kai, then you’ll know how much to take.”

“A lot of the iwi have the same kai but what I think stands out for us, is that we have a lower population, we have rugged coastlines and there is an abundance of kai,” says Karl.

He adds that tīpuna were extremely innovative in the different ways they gathered their resources.

“We were gatherers. We utilised both the interior and the coastlines of Te Waipounamu. Our people travelled seasonally to gather and preserve the kai. In the old days they had to walk everywhere but the kai was abundant, so they didn’t have to walk far.

Karl says the mahinga kai for Te Matatini will be gathered from all over the rohe.
“Each hapū has its own mahinga kai people. It’s all about coordinating with them,” he says.

Te Matatini organisers have estimated that during the kapa haka festival they will cater for more than 5,000 people and although the thought of feeding the multitudes of Te Matatini-goers seems daunting, Karl says it’s all about planning ahead and being prepared.

Karl says the Papatipu Rūnaka and hapū will provide different varieties of mahinga kai, which will range from tuna (eel), pāua, kūtai (mussels), kōura; and they have already secured 60 buckets of one of Māoridom’s treasured foods, tītī (mutton-bird).

The mahinga kai team had hoped to serve traditional hāngī but due to the number of people expected to attend the festival, it seemed too great a task.
“We originally looked at having hāngī but it’s too big a job. I estimated that we would need 20 hāngī in the ground at the same time. The manpower and logistics are too big.
“I’ve seen some big hāngī in my time and often when there’s too much food in there, some of it ends up being half-cooked,” he says.

When it comes time for the festival to kick off, Karl says he will be there, ready to help wherever he is needed and Stan Tawa who is a chef and tutor at Christchurch Polytechnic Institute of Technology will be responsible for the cooking of the kai. For the convenience of festival-goers, he adds much of the food will be cooked ahead of the time of serving.

Karl does not come from a kapa haka background, so he says his main kaupapa for the event will be to uphold the mana of Ngāi Tahu through the provision of mahinga kai. He will also be working to ensure the visitors are well looked after and the food is enjoyed by all.