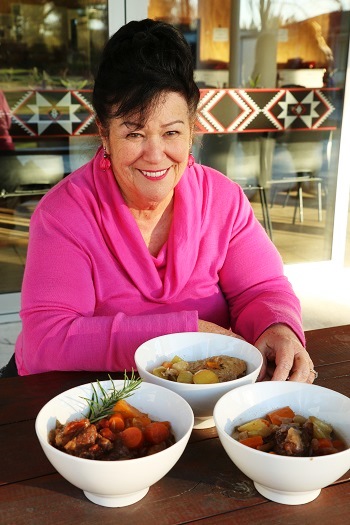 The gift of a slow cooker and an in-house recipe book to all farm workers and families is the latest Ngāi Tahu Farming initiative designed to encourage engagement and healthy living within the Te Whenua Hou farming community in North Canterbury.

Ngāi Tahu Farming General Manager – People and Development, Claire Bourne says the initiative is part of the organisation’s induction programme based on feedback from farm staff.

“It’s about providing our kaimahi with the tools they need to cook the nutritious, filling meals they need during their busy working year, especially at times like calving when they work long, hard hours and don’t always feel like coming home and cooking for themselves,” Claire says.

To accompany the slow cookers, all Te Whenua Hou farming staff will also receive a slow cooker recipe book, which has been compiled by the People and Development team, with contributions from the farm management team in Christchurch.

“We’ve worked with one of our manawhenua kaumātua, Joan Bergman at Tuahiwi Marae to come up with initial, easy-to-prepare slow-cooker recipes and basic instructions and we’ve called our book “Slow Cooking with Aunty Joan & Co.”

“Each of our office staff members have contributed a recipe with a photograph of themselves. That gives our on-farm staff a chance to get to know who’s who in the office, the chance to put a face to the name. We’ll keep adding new recipes too; we plan to add recipes from more of our manawhenua, board and strategic partners such as Whenua Kura.”

As part of the programme, cooking evenings with Aunty Joan will be  organised at Tuahiwi Marae, providing farm staff who are new to cooking with handy tips and ideas for preparing their own slow-cooker meals. That in turn encourages interaction between staff in a marae environment.” 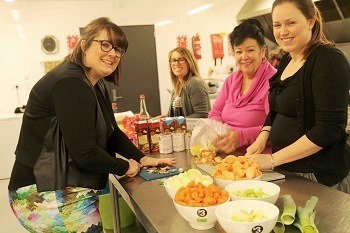 “Getting together over kai is always a good way to break the ice and to get to know each other as a community,” says Claire.

“That’s something that’s happening at a number of levels. During the calving season for instance we’re providing Kai in the Shed breakfasts for each of the seven Te Whenua Hou farm teams; and we also had a pre-calving lunch in early July, to bring staff members together. In addition to that, Oranga Pāmu, the Te Whenua Hou Community Committee, are also organising a staff hāngī.”

Claire says the primary aim of the initiative is to look after the wellbeing of farming staff and making sure they are fit and healthy for the jobs they do.

“We are committed to living and breathing Ngāi Tahu values, such as whānaungatanga and manaakitanga, this initiative encourages a greater sense of community in a new development and gives our young people especially, the tools they need to take care of themselves into the future.”

Deliveries of the recipe books and slow cookers starts on August 1st.