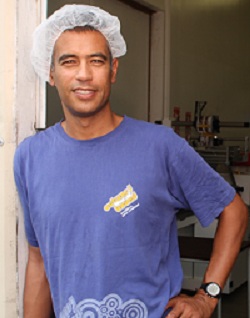 Hayden has always had an interest in the food industry and after completing a Food Technology degree at Massey University, he set off overseas to gain experience in the United Kingdom. After five years working for multi-national companies in London and Liverpool, he returned to New Zealand in 2005. In 2007, while working for his parents, Adrian and Lania in the family beekeeping business, Nature’s Country Gold, he started thinking about ideas his for his own business. It was his mother’s delicious nut slice that provided the inspiration for what has become a very successful export business.

From the outset, Hayden was keen to produce a natural energy product, made from 100 per cent natural ingredients, including the natural New Zealand manuka honey his parents collect from hives in Coromandel, the Waikato, King Country, and other remote locations.

Boosta bars and Manuka Cells have since taken off and today Hayden’s company produces thousands of bars a week at his own factory, exporting as far afield as China and the United States. He acknowledges that taking a family idea and turning it into a successful international brand in just five years has taken a lot of hard work but he says it’s been worth it.

“We’ve been working hard lately on rebranding and extending our product range, to make sure we keep on improving,” says Hayden.

“We want to appeal to both health and wellbeing markets. Our products are now selling in most cycle shops throughout New Zealand, as well as in health, tourist and pharmacy outlets. I am sponsoring Craig Pauling (Ngāi Tahu) in his 2014 waka ama campaign; and I’ll also have a stall at Tri-Māori at Lake Karapiro in late November.”

Honey is the Pohio family’s thing and Boosta is a great extension of that.
“It’s all about making life a little sweeter,” says Hayden.