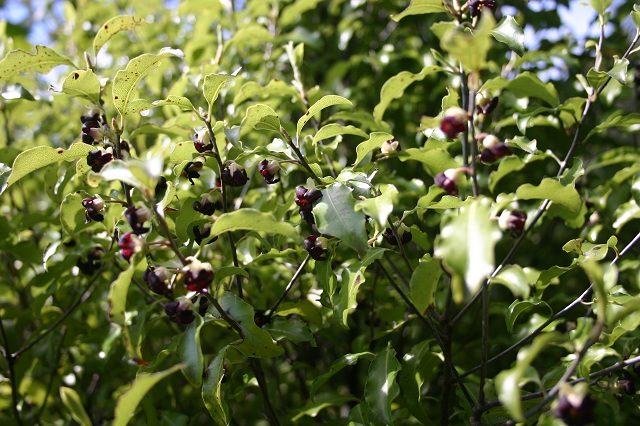 Kōhūhū rates as one of the show stoppers of our native bush with its explosion of striking new growth glowing like a beacon of spring.

Ironically, it is probably better known to gardeners and landscapers by its tongue-twister of a botanical name: Pittosporum tenuifolium. It is also known as kōhūkōhū and black matipo in some historical references, but the latter is apparently incorrect.

Kōhūhū is one of our most common trees, an evergreen that grows to between 8 and 10 metres tall. It is one of 150 species of Pittosporum, 26 of them endemic to New Zealand.

As a shrub or adult tree, it is distinctive for its striking, pale green foliage on black stems, its wavy leaves 3–6 cm long. In spring it carries dark red to purple/black flowers that are more intensely fragrant at night and, in autumn, its woody seed capsules split open to display a mass of black seeds on a sticky base.

It is fast-growing, very hardy, and tolerates dry, cold conditions; but is less tolerant of a wet climate. It grows well in coastal and lower montane forests up to 900 metres in altitude throughout Aotearoa, but is restricted to the drier eastern side of Kā Tiritiri o te Moana (the Southern Alps).

The tree also flourishes in the south of England, where its foliage is harvested by the tonne from hedgerows to satisfy popular demand from florists and flower markets.

It is its neat, generally compact growth habit and wide natural variation that make this such a popular specimen for ornamental planting in private gardens and public parks.

Kōhūhū hybridises readily, which explains the natural variation in colour, shape and size. Even when planted in rows, a crime in the eyes of landscaping purists, these fine specimen trees rarely look regimented.

Five varieties are recognised by the Royal Horticultural Society as award-winning species for ornamental planting and landscaping.
A number of cultivars have variegated or purple-tinged foliage that is popular for flower arrangements.

This tree thrives in either full sun or shade and is easily grown from seed. A cheap way to source plants is to pot up the self-sown seedlings that appear prolifically in the leaf litter around parent plants.

Seedlings do well in pots for a couple of years, as long as they are planted out in their permanent position before they get too big.

In terms of traditional uses, the gum of kōhūhū and its closely-related cousin tarata (lemonwood) were key ingredients in the manufacture of many Māori perfume recipes.

Kōhūhū gum was mixed with the juice extracted from taramea (wild Spaniard), or oils drawn from the seeds of tītoki, miro and kōhia (passionfruit) to make scented body oils.

According to one source in Murdoch Riley’s Māori Healing and Herbal, the gum of kōhūhū was harvested in the same manner, same season, and same time of day as taramea, while dew was still on the ground in the early morning.

“In most instances this gum is one of the compounds used in making the taramea scent, but when used alone in oil, it is called tīere or tīare,” one of Riley’s sources wrote in 1883. He said it was used to scent the houses and mats of chiefs and single women of high rank.

Other historical accounts record that the gum was obtained by bruising the bark, or by making small vertical cuts in the trunk and later collecting the gum exuded.

The fresh gum resin was also mixed with the thickened juice of pūhā (sow thistle) and chewed as a cure for bad breath or sore gums.

It is possible that scent was also obtained from the leaves, which give off a sweet, fresh aroma when crushed. There are historical reports of Māori spreading branches of kōhūhū on the floor of whare puni (guest houses) for their fragrance.

Crushed leaves of kānuka, kōhūhū and kawakawa were sometimes immersed in tītoki oil. An animal or bird skin was then soaked in the oil and hung around the neck of a person to give off a pleasantly pungent fragrance.

A sprig of kōhūhū was commonly used by tohunga in ceremonial proceedings such as the birth of a child, or in lifting tapu restrictions.
Alternative names for the plant, tāwhiri or rautāwhiri, suggest it was also used to beckon or welcome manuhiri (visitors) on to the marae, and Riley says it is still sometimes used for this purpose.

The authors said certain parts of the plant were dried in the sun, pounded into a dust and mixed into a paste with hinu kōhia (oil from the seeds of the New Zealand passionfruit).

In our patch of bush, we always have a dozen or more seedlings growing in the nursery, and can always find a spot to place this fine specimen tree.