In Japan, when something precious breaks, they repair it using glue with powdered gold mixed in. That way, when the object is put back together it honours the piece it was before, and makes something more beautiful of the new item. It’s known as kintsugi – golden repair.

This is how it is with Christchurch, but the gold in our repairs is an increasing acknowledgement of Māori culture and tikanga. As the city regenerates post-quake, organisations and businesses, government agencies and policy makers, architects and landscape designers are all taking the opportunity to layer in Māori history, language, and practices that have been largely ignored in 150-odd years of colonisation. It is giving a voice to Māori, and acknowledging and embedding Ngāi Tahu as mana whenua.

A good example of this is in education. Mātauraka Mahaanui, established in 2014 as an advisory board to the Ministry of Education, has made real inroads into developing what a bilingual education system in Christchurch should look like. 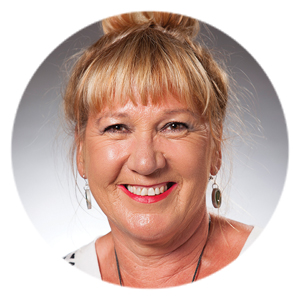 Elizabeth Brown, the chair of Mātauraka Mahaanui, explains the organisation’s kaupapa. “We were set up to guide education renewal in greater Christchurch and represent collective mana whenua, papatipu rūnanga, the Māori Community Leaders Forum, and other Māori interests.

“Te Rūnanga o Ngāi Tahu, as the Treaty partner, has mandated this group to act on its behalf in the greater Christchurch area.”

The group worked initially with two mana whenua rūnanga – Te Taumutu and Ngāi Tūāhuriri. After a series of hui, consultation with Ngāi Tahu whānau and schools, focus groups, and phone interviews, two key issues emerged: Māori student achievement, and te reo provision. Mātauraka Mahaanui wrote a strategy for each of these themes and, to the members surprise and delight, the Ministry of Education adopted and mandated both strategies.

“It’s been a game changer,” says Elizabeth. “The Ministry has been more than willing to step outside the square and look at how they might enable our ideas. They haven’t said ‘no’. They’ve asked how they can make it work.”

“We started using mana whenua facilitators to help develop these narratives for schools. This is about a school deciding who they are. For schools being rebuilt, this was also an opportunity to help create a design that would be culturally responsive.”
Elizabeth Brown Chair, Mātauraka Mahaanui

The first job for Mātauraka Mahaanui was to embed a cultural narrative into as many schools as possible in the region. Each rūnanga was contracted to write these for the clusters of schools and Early Childhood Education centres within their respective takiwā. “We want the children in the school to know the story of why a school is called something, and be able to explain how it relates to them,” says Elizabeth.

“We started using mana whenua facilitators to help develop these narratives for schools. This is about a school deciding who they are. For schools being rebuilt, this was also an opportunity to help create a design that would be culturally responsive.”

A school’s narrative might talk about sites of significance near it, mahinga kai, the flora and fauna in the area, or any historical events. The mana whenua facilitators are also able to work with the support organisation Grow Waitaha to ensure pedagogy (the act of teaching) leads new building design. With the whānau voice being heard in the planning stages, facilitators could also help deliver an education brief at the master planning stages to ensure cultural narratives were built into any new facilities.

The cultural narratives also become a starting base to develop a local curriculum that reflects Ngāi Tahu culture, reo, and tikanga.

If the cultural narrative is the glue binding these schools and communities together, it is the teachers who are providing the golden sparkle, through a programme known as Kā Poupou Reo o Tahu. Designed to upskill teachers in Mātauraka Kāi Tahu, and extend their te reo Māori proficiency for use in kura, Kā Poupou Reo o Tahu is a combined Ministry of Education and Mātauraka Mahaanui programme for teachers to be immersed in Ngāi Tahu reo, pedagogy, and narrative over 10 weeks, with two cohorts taking part each year.

“There are many teachers who have te reo, but we wanted it to be Ngāi Tahu reo. We wanted our teachers to know our stories, our waiata, our haka, and our marae,” says Elizabeth.

For the first part of the programme, teachers are released for a term for their study, with the Ministry of Education funding a relief teacher for the school. The following term, Mātauraka Mahaanui facilitators provide support to the teachers in their classrooms. 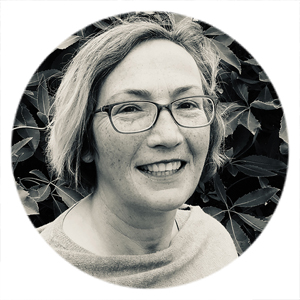 Robyn Jane McConchie is a Junior Class Teacher at Hāpuku School in Kaikōura, and says the programme came at just the right time for her. “I’ve been teaching for 14 years, and even though I’ve tried to incorporate te reo Māori in my classes, it’s been hard. As a kaiako there is a lot going out of your kete, your bag of tricks and skills; so this course was an opportunity for me to concentrate on upskilling myself and to learn a new approach to teaching.”

Robyn says the amount of te reo spoken in her classes has increased significantly. “I learnt a lot of new phrases and words, and after hearing the stories about Tuahiwi Marae, I realised how little I know of my own marae.”

As a result of the programme, Robyn’s passion project is to teach her tamariki about Takahanga Marae in Kaikōura. “We go there every Wednesday and learn about the pou and the artwork, and the stories of atua Marukaitātea. I want them to learn about one carving, and one story, so when they go on the marae they can tell their friends and whānau about it.”

Heading into its third year, demand for places on Kā Poupou Reo o Tahu is far outstripping supply. The Ministry of Education has provided funding for another four teachers next year, bringing the number on each of the two courses held during the year to 12. So far there are more than 50 applications for the 24 spaces.

As principal at Addington Te Kura Taumatua, Trudy Heath was more than happy for one of her teachers, Nicole Baxter-Warren, to take part in the programme. “One of the things we have been working on as a school is to get parents and students to identify as Māori, because so many of them don’t.” 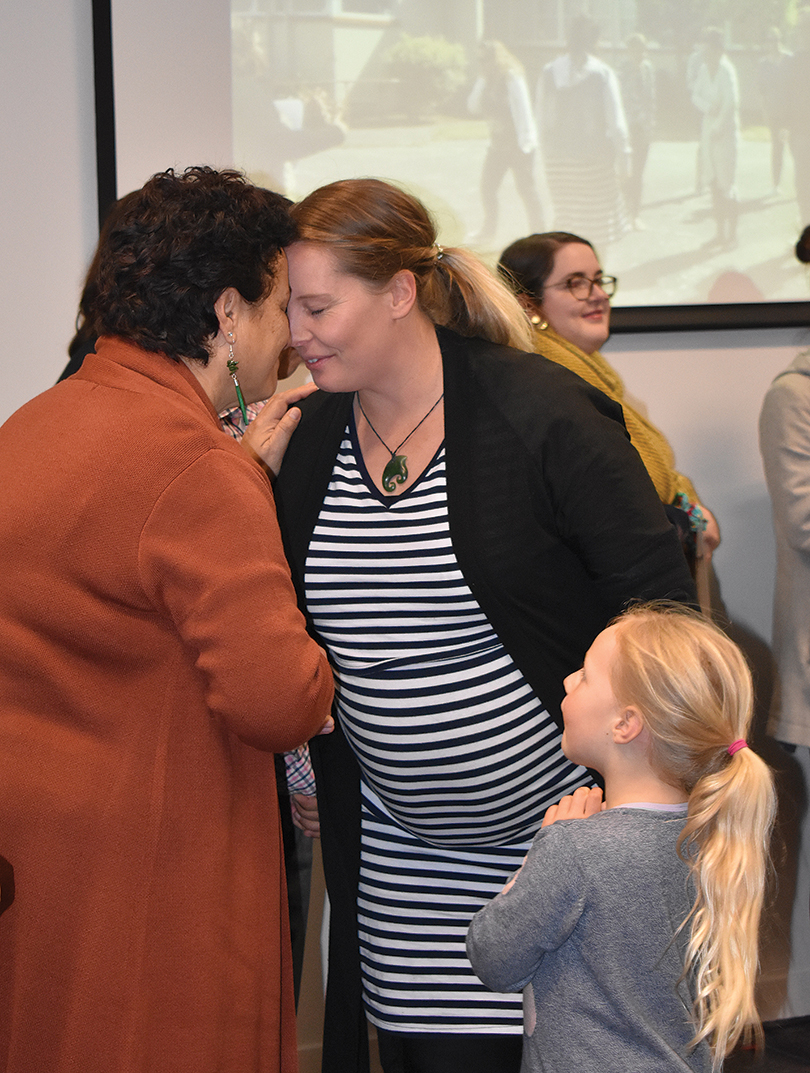 Above: Lynne Te Aika with Nicole Baxter-Warren and daughter Avalyn.

Trudy is confident that Nicole will continue to make a difference within the seven-school cluster, using the skills she learnt during the Kā Poupou Reo o Tahu programme.

“I see growth in Nicole, because this programme has made her really confident in her own skin and it is very clearly a Ngāi Tahu skin. This has come from all the tools she has been given that are now in her basket, and her increased sense of self and confidence around Ngāi Tahutanga.”

Trudy said the programme worked because Nicole and a teacher from one of the other schools in the cluster went back to their schools and modelled what they learnt.

“Knowledge is being transferred and shared. Just in this one cluster of teachers I’ve seen the confidence and capabilities grow.

“When these two teachers came back to the group we were in the process of writing our te reo curriculum for the seven schools in the cluster. We had got so far, but then they came in with highly trained eyes. They looked at what we were doing and pointed out quite a few things that we might have got wrong or that we could improve, and there was real power in that.”

Elizabeth Brown agrees that as the school curriculum is reasonably permissive, Mātauraka Mahaanui is perfectly positioned to introduce a Ngāi Tahu approach to New Zealand history, but one that could be used widely across the country. “We are creating a model that works for us, but it’s a framework that could be easily adopted by hapū or iwi in other regions in their work with schools and early childhood centres.”

As a former teacher at Rolleston’s Kingslea School Te Puna Wai o Tūhinapō, Jamie Ruwhiu says the stories of belonging and tikanga that underpin the Kā Poupou Reo o Tahu teaching programme were powerful for the young men he saw in the school. He says they make a real difference to these mostly young Māori men, who struggle to relate or adapt to being Ngāi Tahu.

“We ran a kaupapa Māori unit where the idea was to eventually have them understand the tikanga and respect that would earn them the right to sit on the paepae.

“We taught them karakia, and how to do their own personal pepeha, and a whakataukī of the day. It took a couple of weeks, but they gradually became engaged in the process.”

In its short lifetime Mātauraka Mahaanui has made significant positive changes to our local education landscape by generating a new movement of teachers, committed to a gold standard in education – a Ngāi Tahu-focused, bilingual, and culturally aware future for
our tamariki.