Twenty-year-old James Buchanan tells kaituhi Beck Eleven he is off to London to follow his musical theatre dreams.

James Buchanan in concert with New York composer John Bucchino at the piano.

James Buchanan certainly has his geography correct when he says, “Gore is a long way from London.”

The 20-year-old, who grew up in Gore, “where there were plenty of men in beards but not a lot of dancing”, is heading to London in August to train at ArtsEd, a prestigious musical theatre school with Andrew Lloyd Webber as its president.

“They call it the triple threat,” James says. “Singing, dancing and acting. I’m terrified but I can’t wait.”

James (Kāi Tahu, Kāti Māmoe, Waitaha, Rongomaiwahine) was a shy boy. He’s not even sure if his musical talents were noticeable from a young age, although growing up as the youngest of seven siblings means he may not have stood out in such a busy household.

The Buchanan children were educated through Te Kōhanga Reo and Kura Kaupapa Māori. When they moved to Christchurch, James went to bilingual units at St Albans Primary School and Shirley Intermediate. He believes kapa haka brought him out of his shell.

“I reckon that must have been the first time I was brave enough to perform in public. Kapa haka really is musical theatre.

“Mum was my inspiration because she’s musical, but I was a shy kid so performing in kapa haka helped me overcome that.

“I remember watching Riverdance when I was at intermediate and saying, ‘I want to do that’, but who can take a kid seriously who just wants to flail their arms and legs about?”

Being gay, early high school years were tough for James. He came out to his mother and family, who were supportive, but he’d also written about his sexuality on his blog, “which I thought only four people read”.

He soon became the topic of gossip at Christchurch Boys’ High School and remembers being called a few names he won’t care to repeat.

“Boys’ High didn’t go so well for me. I’d known for a long time that I was gay. I was as sure as you could ever be at that age but coming out at high school is not easy. It really affected my self-consciousness. I’d want to perform but I knew people were watching me as ‘that gay guy’, and I guess I was scared of having cabbages and tomatoes thrown at me.”

Coping with coming out at a boys’ school was one thing, but being Māori added another twist.

“I feel like there’s a real stigma around being gay and Māori. Maybe it’s something to do with conversion by European settler missionaries to a Christian-centric belief.

“Being gay is a huge part of my identity now. I don’t want any kids to think they need to hide themselves, or believe they are second-rate. For me, it was just teenage boys – they’re already adolescent and moody, so you can imagine how it was.”

In fact, the situation made him consider leaving school for good. “I didn’t want another year of that shock therapy,” he says. But a friend in his extra-curricular dance class convinced James that Burnside High School would be more welcoming. 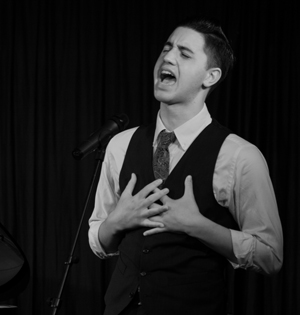 “And it was the best year of my life. They do so much there, the students run musical groups, there’s all this youth initiative. It was a mixed school and everyone just seemed so young, fabulous, and talented. I felt more accepted, like being gay didn’t matter – you just were who you were.”

Soon it was time for James to decide what to do with life beyond the school gates. He enrolled in the newly-created Christchurch International Musical Theatre Summer School.

“It was just for a taste test – I wanted to decide if I was happier doing direction or performance.

“By the end of the nine days there was absolutely no question. I was downright certain I wanted to perform.”

It was there he met Mark Dorrell, who has worked with some of London’s West End legends such as Sir Ian McKellen and Dame Judi Dench. Dorrell had retired to Aotearoa and was helping out at the summer school.

“He called me a triple threat – singing, dancing and acting – and I just fell in love with him; he’s an amazing pianist and an incredible man.”

Dorrell acted as an intermediary between James and the ArtsEd school, helping him put together an audition tape.

So James pressed “send” on his email at 8 pm one evening last November, thinking he wouldn’t hear back for weeks. The next evening he was checking his emails and saw a reply from the school.

“I just assumed the file hadn’t sent so I opened the email and it said, ‘Hi James, we are delighted to inform you…’.

“I couldn’t believe it. I read it again and yelled out to mum, and I was sobbing and crying. It was a mixture of exhilaration and relief and a new kind of anxiousness of what was going to come next.

“It was so daunting – I hadn’t foreseen it and I had to forfeit plans with NASDA where I was studying in Christchurch.

“I was bursting with pride but I had to keep a lid on it for a while until everything was sorted.”

Even though people see Ngāi Tahu as a huge business, there are people there who love the arts – they might do business by day but at night they’ll be talking to people in their kapa haka groups and getting into it themselves.

They are philanthropic but it’s more than that – they take an interest in their youth, in teaching them so we can have a better future than many of them had.

You really feel it with Ngāi Tahu. Modern Ngāi Tahu is unique. It’s about being staunch in your Māoridom. Taha Māori has spread its arms wide.

With London on the horizon, James is making contacts and fundraising for the three-year tuition.

He has been thrilled at the way Ngāi Tahu have helped spread the word about the first of its iwi to be accepted to the school.

“Even though people see Ngāi Tahu as a huge business, there are people there who love the arts – they might do business by day but at night they’ll be talking to people in their kapa haka groups and getting into it themselves.

“They are philanthropic but it’s more than that – they take an interest in their youth, in teaching them so we can have a better future than many of them had.

“You really feel it with Ngāi Tahu. Modern Ngāi Tahu is unique. It’s about being staunch in your Māoridom. Taha Māori has spread its arms wide.”

James is going to make an impact on stage. He’s slim and just pips six foot on a height chart. He wears a heru around his neck but never on stage, “because you can’t wear taonga and jewellery while you’re leaping about”.

His mother Moana-o-Hinerangi is Māori, and his father Graeme Buchanan is Pākehā .

“I’ve been told I look like an Italian barista with a Māori nose. Having quite white skin does take people aback when you’re on a marae or something and you can see people go, ‘Who is this white boy speaking te reo?’

“Then on the other side, you’ll have people going, ‘Oh, you’re Māori and succeeding’, like it’s a big deal.

“I’ll just stay being myself. I’d rather be a role model for one person and inspire them to change their life than have to become something I’m not so more people can relate to me. I won’t conform just for that.”

James is going through a “Mozart phase” and describes himself as a “bit of a snob” when it comes to musical theatre. He likes Rodgers and Hammerstein, Lerner and Loewe, and Stephen Sondheim. He enjoys timeless classics from shows like Oklahoma! and My Fair Lady, but at the root of it all, kapa haka is what took him there and he’ll never forget it. Next stop, London.