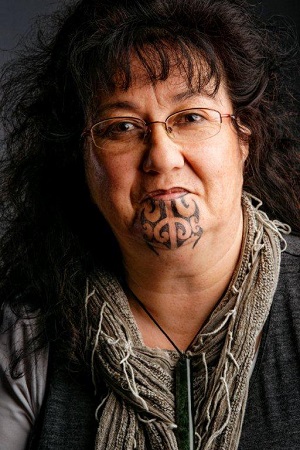 Maatakiwi Wakefield lives and breathes kapa haka, so it’s no surprise to learn she is enthusiastic about her involvement with Te Matatini 2015.

Maatakiwi (Ngāi Tahu, Waitaha, Kāti Mamoe, Te Atiawa, Ngāti Toa, Ngāti Mutunga) is the
Kaihautū of Te Rūnanga o Koukourārata. In this role she oversees the day-to-day operations of the rūnanga and its projects, while supporting both the whānau and the rūnanga in achieving their aspirations.

She is heavily involved with Te Matatini both personally and professionally. She has several roles which include coordinating the whare toi space at the festival and overseeing the hosting of the leading Tainui kapa haka team, Mōtai Tangata Rau at Te Rūnanga o Koukourārata.

Although she is kept busy with her ‘day job,’ she says the key to both of these added roles is being organised and having good time management. She adds that a sense of humor also comes in handy.

“You’ve got to be able to live in two worlds – your work world and your haka world. I’m very fortunate to be working for a rūnanga that appreciates kapa haka. They are going out of their way to ensure our manuhiri receive the very best manaaki during their stay as a thank you for the kindness bestowed on us during the earthquakes.”

Maatakiwi has also had a passion for weaving since she was young and over the years she has been privileged to learn traditional Māori weaving from renowned Ngāi Tahu weavers Reihana Parata, Ranui Ngarimu, Morehu Henare and the late Cath Brown.

“I’ve been really fortunate to have been in the right place at the right time, as I’ve been able to observe the best [weavers] in New Zealand, thanks to my aunties.”

Having a background in raranga has enabled Maatakiwi to develop her own network of kaitoi – artists – both traditional and contemporary, and this has assisted her in her preparation of the whare toi. She is in the process of bringing together a team of people who will assist in overseeing demonstration and exhibition spaces. Maatakiwi adds that she is excited to be part of this project which draws many of our top mahi toi and mahinga kai exponents together in the one area.

“I can already see what the whare toi area will look like, so my task now is to relay the vision to our team and artists,” she says.

Her vision is to create a space that is an extension of what is happening on stage.
“Over the course of the four days around 20 artists will showcase their work, providing demonstrations and workshops, which we hope will not only include weavers, carvers and tā moko but also mahinga kai practices such as mokihi. Unfortunately taonga made in the whare toi not be sold but many of the artists have stalls in the market place where items will be able to be purchased.”

Maatakiwi is a longstanding member of the Waitaha kapa haka group, Te Ahikaaroa, which was established in June, 1993. She joined the group in April 1994, after returning home for her father’s tangihanga. In 2012, she became one of the founding performers of Te Ahikōmau-a-Hamoterangi, a competition-focused rōpū formed from within and under the guidance of Te Ahikaaroa. Te Ahikōmau-a-Hamoterangi won the Waitaha regional competition that same year and went on to perform at Te Matatini ki Rotorua in 2013. Next year will be the second time Te Ahikōmau-a-Hamoterangi have performed at Te Matatini; and they will perform fifth on the first day of the festival.

Their final performance team is yet to be confirmed and Maatakiwi says it would be an honour to be selected as one of the final performers in Te Ahikōmau-a-Hamoterangi.

“It is an amazing group to perform with. I learn so much each campaign we undertake and I’m grateful for every opportunity to be part of this whānau.

“Te Matatini features the best of the best on stage and if you’re up there, you are one of them – it’s an awesome but humbling feeling.

“It doesn’t matter how many competitions or performances you do, when you’re out on the stage wings waiting to go on, that’s when the nerves hit. When I’m standing there I’m nervous and excited but when I hit the stage I’m proud. I’m proud of who I represent, my whānau, my hapū, my iwi and of course my rōpū. For me it feels like I’m breathing life back into my tīpuna.

As well as showcasing the country’s leading kapa haka groups, Maatakiwi says Te Matatini will also present Ngāi Tahu whānau with the opportunity to acknowledge the generosity of support given during the Christchurch earthquakes.
“Te Matatini 2015 is our way of being able to say thank you to all the iwi who gave support to us during the earthquakes – he ngākau aroha ki te katoa.

“This is an opportunity for our people to be part of the biggest celebration of Māori being Māori, the best of the best in one place at one time – it’s like a huge whānau reunion. You not only get to catch up with whānau in other groups but you also make new friends.