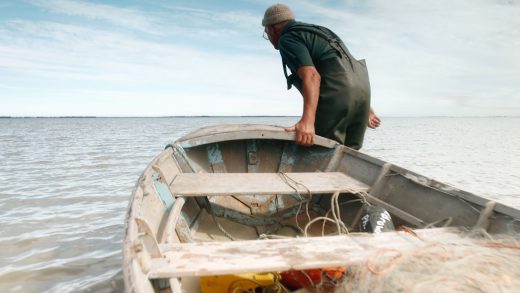 A lifestyle documentary series celebrating the stories and traditional food gathering practices of the iwi was launched in Christchurch last night.

Ngāi Tahu Mahinga Kai is a 12-part online series offering a window into the lives of Ngāi Tahu whānau and their ancestors. Funded by New Zealand on Air and Te Māngai Pāhō, it has taken the production team 13 months to capture footage and stories from around Te Waipounamu.

Joseph Wakefield, Cultural Advisor for the project says the ability to hunt and gather food from the land and sea is part of the Ngāi Tahu DNA.

Watch the other episodes at www.mahingakai.tv

“Mahinga kai defines us. It is who we are hence the reason why it is so important to pass on this knowledge to our future generations,” he says.

“Our tīpuna (ancestors) moved and hunted with the seasons, from the mountains to the sea catching, preserving and trading kai. It’s our past, our present and it will be our future. Regardless of how our environment has changed, we have remained motivated in the continuation of our art and practice of mahinga kai.”

To understand how important mahinga kai is to Ngāi Tahu, it’s worth remembering that when Pākehā arrived and land was sold to the Crown, Ngāi Tahu found themselves shut out of many mahinga kai sites, which the Crown had promised to make available.

So when the Ngāi Tahu Claim, or Wai 27, was registered in August 1986, it was presented in nine parts, known as the Nine Tall Trees of Ngāi Tahu. Eight of those trees referred to land sales; the ninth was mahinga kai, an intrinsic part of the tribe’s identity, because the rights to gather particular resources from those sites were handed down through generations.

Mahinga kai practices were integral to the tribe’s way of life. That’s why they became a cornerstone of the Ngāi Tahu Claim.

While the mahinga kai web series presents specifically Ngāi Tahu stories, their appeal is universal – this is a series not only for Ngāi Tahu but, for all those with a passion for food, culture and lifestyle. The series goes live online at: www.mahingakai.tv on Friday 3rd September.