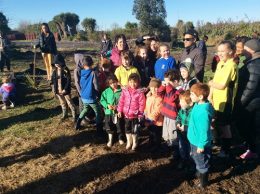 The 400 native trees were donated by the Department of Conservation and pupils from the bilingual unit of nearby Freeville School planted out the community vegetable garden they designed and built. The pupils recognised that their nearby communities of Burwood and North New Brighton have been badly affected by the Christchurch earthquakes and they were keen to develop a project that would help raise community spirit. They will maintain the gardens in anticipation of a bumper crop of vegetables. A fruit tree grove was also planted out in the Anzac Drive Reserve.

Te Marino Lenihan, project manager for earthquake recovery, Te Rūnanga o Ngāi Tahu, says the Mahinga Kai Exemplar Project is one of 17 projects in the Natural Environment Recovery Plan and was initiated by Te Awheawhe Rū Whenua in partnership with the Avon-Ōtākaro Network.

“Mahinga kai is central to Ngāi Tahu culture and in turn, central to the concept of mahinga kai is the notion of kaitiakitanga (traditional sustainable management) and an integrated catchment view of our environment from mountain to sea – ki uta ki tai. Local Ngāi Tahu hapū, Ngāi Tūāhuriri has elevated mahinga kai as the key design principle driving their engagement in the rebuild of greater Christchurch,” he says. 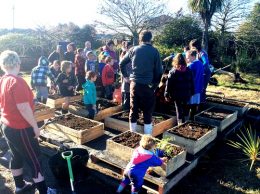 Success will be measured by how well mahinga kai can be protected, rehabilitated, enhanced and maintained for the future enjoyment and benefit of greater Christchurch communities. Harvesting these resources should only be sanctioned once they are healthy and abundant enough to be sustained.
“This project was a chance for Ngāi Tahu to set a good example for how we as a city might approach environmental recovery so that there’s a healthy balance between land and water and the development and rehabilitation of communities,” says Te Marino.

“We have an unprecedented chance to uplift our mahinga kai values and do what needs to be done to set a good example. It’s about taking the lead.”

Whitebait (inanga) have been chosen as the hero species for the Avon River.
“Māori and Pākehā are united in our common pursuit and passion for whitebait. This area is an ancient whitebait spawning ground. We believe that if we can restore the red zone whitebait and other key kai species and habitats, then the benefits will flow for the whole city.
“If we build for people the fish won’t come but if we build for the fish, the people will come,” says Te Marino.

“My hope is that the philosophy of designing and developing for inanga first and people second is adopted across and up and down the river corridor and that the environment will provide a world class fishery and wildlife environment that becomes a new economic stream for east Christchurch communities.”

“It’s all about turning the red zone green. It’s about building a social infrastructure that builds social capacity, bringing communities together and strengthening their spirit during the rebuild of the city. We want to build a healthy, harvestable environment.”